Just a taste of what we’re missing

Every time a likely boat has appeared on Apollo Duck, it has sold within hours, long before we could have driven uo to see it.  And the hire boats were booked solid all summer and through September. We couldn’t stand it any longer – we needed a proper canal fix!  Eventually Dave found a week available on the Shroppie so here we are on Summer Wine.

We were so excited about getting back on the canals we took extra care to spot the landmarks we crossed on our journey – the Bristol Avon (high tide but no boats), the Stratford Avon (no boats), and we waved through the concrete wall at the BCN as we roared along the busy raised section of the M5.  Then we were keeping our eyes peeled for the Tame Valley aqueduct over the M5  - 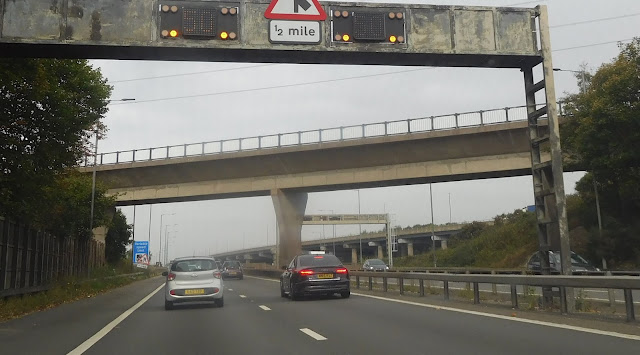 - no boats, and the top of Offerton locks (still no boats).  The satnav took us off the motorway onto the A5 past the Gailey toll house, but we couldn't see the canal, then through the lanes towards Gnosall where we finally spotted some moored boats, and eventually to Norbury Wharf and a bit of action.  We were too early to get on board, so took our sandwiches and wandered down to find a bench on the towpath.  We sat opposite a motor and butty which are being restored by the Shrewsbury & Newport Canals Trust, who will then take them down to Wappenshall when they have been restored and the canal is in water that far.  The motor is sitting so high out of the water because the engine has been removed for restoration.

I'm afraid I can't remember their names, Mr Google can't find them and the leaflet two kind gentlemen gave us got left in the car.

The arm opposite the Wharf is just used for mooring at the moment.  The first lock is currently in use as a dry dock (the white building at the end of the arm), but when the restoration through to Wappenshall is nearing completion a new one will be built to the side so the lock will return to its proper use. 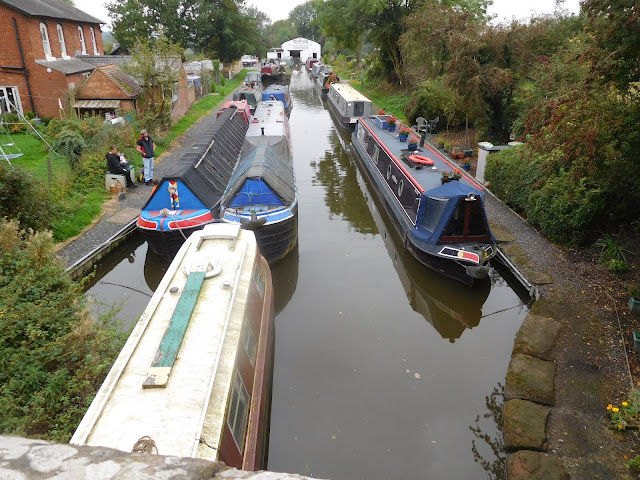 Then we sat in the car, read the paper and watched ‘our’ boat being sanitised on the outside – a lot of spraying and wiping along its length, a bucket of some disinfectant stuff we supposed sloshed over the stern deck followed by a good hose down.  Finally we were able to load our stuff on board.  There was just a suggestion of bleach in the air.  We only needed a quick briefing on the engine and safety stuff, no need to be shown how to steer!  But we did let the engineer perform the very tight turn out of the mooring towards Autherley Junction.  And we were off!

It was a bit strange, as this boat is the same layout as Chuffed and it gave me quite a jolt when I first went inside.  So similar, yet quite alien.  The tiller arm is very high, which made it quite uncomfortable to use – neither of us is very tall and it felt very heavy to steer.  I found it tucked neatly into my armpit, which is not a comfortable steering position!  Dave thinks the top bearing of the rudder needs attention too. We haven’t been on the Shroppie for years, and were busy looking out for things we remembered.  Shelmore Embankment, for one, with its kingfishers.  The stop gate at the southern end, there to be used in case of a breach in the embankment, looks distinctly ropy.  It’s a long way between locks on this part of the canal, so a lot of water to lose if stop gates aren’t operational.

Then through Gnosall, where we once had a good meal in the Navigation overlooking the canal, and past the garden which seems to be trying to emulate Charity Wharf. 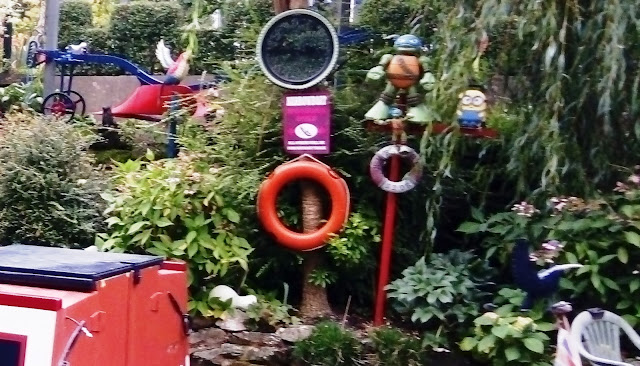 I had somehow got the wrong setting on the camera, so it was rather over-exposed and I had to crop some of it.  I’ll try for a better shot on the way back.  We are not attempting the Four Counties ring in a week!

By now it was getting late and we were tired, so we moored before we got to Wheaton Aston.  We were prepared for the infamous Shroppie Shelf (an annoying concrete shelf that juts out up to a foot from the back, but inconveniently under water so you can’t see it till you grate along it).  There was no wind, so we didn’t think we’d spend the night banging against it (hire boats aren’t issued with go-kart tyres to keep the boat away from it, of course).  Poor Meg, doing her best to leap the gap, found her back paws slipping on the stern deck – no rubber mats on hire boats!  And the poor thing had to be hauled up the bank – twice! – before we had even finished mooring up.  Once we twigged the problem and laid one of her towels down to provide grip she was fine.

The TV system on board is up-to-date and was already tuned, so Dave could sit in comfort for the England match this evening.  The seats are the modern lighter-build Captain’s chairs and very comfortable.  Just the place to enjoy a glass of wine.

It’s weird being on a boat that isn’t ours.  We knew there wouldn’t be fenders, so I phoned ahead to ask for some and also some piling hooks, which they were happy to supply.  Everything else is just different.  Sometimes better - for example it's a lovely modern shower - and sometimes, well it's a hire boat so you don't expect more than the basics do you?

Our initial plan was to hot-foot it to Great Haywood junction, and spend the night on Tixall Wide to try and catch the fabulous murmuration of starlings we saw a few years ago. Will we make it?  It means being on a mission, like most hirers!

7½ miles, no locks, rocky Cowley tunnel and a damp dog.