A brilliant day for the first cruise of the year

At long last we are back on Chuffed, several weeks later than we thought we would be.  Lots of things going on at home, not least a car that took a long time to be fixed!  So our normal first short trip didn’t happen, and with all the clothes and stuff for a longer trip as well as all the bedding and food to restock the galley there was barely room for Meg on the back seat.  She didn’t approve until we had made a nest for her on our quilt. 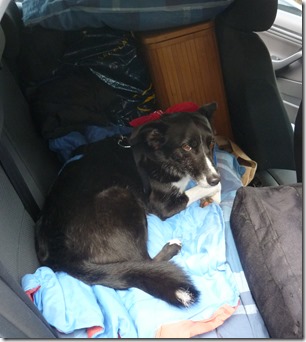 We arrived at Droitwich Spa marina in sunshine, and stayed in the marina overnight.  Chuffed seems to have withstood the winter weather without too much trouble, although the cratch cover is really showing its age now and another foot of stitching has given way.  So that’s a job to be done as soon as possible.

Once we’d unpacked I left Dave polishing the brasses and took Meg off for a walk.  We took the footpath across the field at the back of the marina to a lane which comes out where the Droitwich Junction canal meets the Worcester and Birmingham, and walked back down Hanbury locks.  It was a cold evening but the fire was cosy.

On Thursday we woke to bright sunshine and a freezing boat.  But the frost soon disappeared and we were leaving the marina by 9.30.  Meg immediately adopted her cruising position. 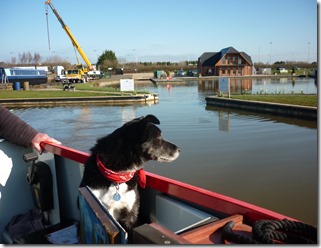 The Hanbury locks were all in our favour, and as we approached the top the volunteers arrived and locked us through.  A week ago they had one boat through on the Thursday, and then 22 on Good Friday as people grabbed the sunny day to go out for the Easter weekend.  Here they are closing up for us.  The electronic indicator board showed that the Severn is on yellow boards, waters receding. 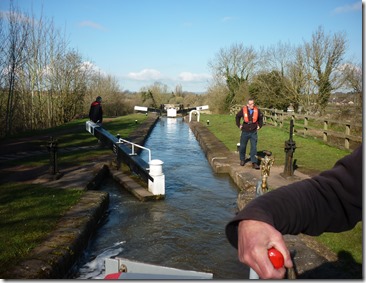 We pottered up to Astwood locks in glorious sunshine, with chiffchaffs and larks singing their little hearts out.  We passed the agricultural graveyard which lies at bridge 38 in a triangle of land between canal and railway. 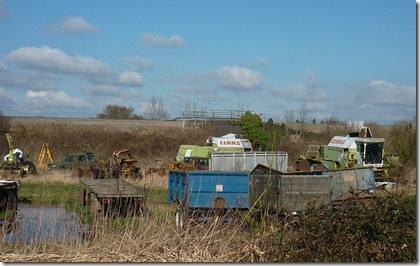 Astwood locks were all in our favour. At the second, the one where the lock cottage garden is on the off-side of the lock, they were selling bantam eggs at £1 a dozen, so we got some. Dave closed up the locks behind him while I went on to the next. 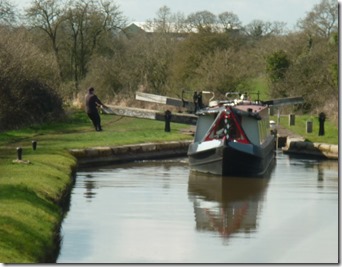 We moored at Stoke Works for an early lunch, then cracked on up Stoke Locks.  I had to turn most of these, but a volunteer came along and gave us a hand.  It was his first day on his own after his training had finished; two o’clock in the afternoon and we were his first boat!  We arrived at Stoke Pound and were moored up in the sunshine soon after 3.  I took the cratch cover off to repair the stitching where it had rotted. 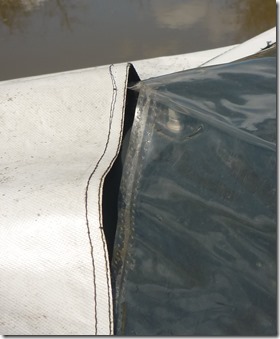 Luckily the sun was strong enough to make the material pliant enough to work.  The Speedy Stitcher makes it easier but it is still a pig of a job.  The size of the canvas makes it quite unwieldy and that is my excuse for the somewhat uneven stitching.  At least it will hold until we find a more permanent solution! 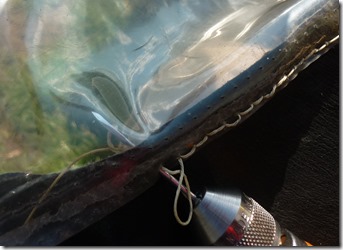 The Queen’s Head was completely booked this evening unless you go early and take pot luck in the bar area.  We fancied a beer anyway, even though 5.30 is a bit early for us!  Dave had excellent fish and chips and I had posh macaroni cheese – and we hit the right time for 25% off main courses and an offer on the drinks too.

All set for Tardebigge tomorrow!  Two other boats arrived this afternoon so who will be first to get going I wonder ……