Exeter canal was frozen too ….

Wasn’t it supposed to be the first day of spring on Thursday?

Down here in the soft south we have been keeping in touch with life on the canals via blogs full of tales about getting frozen in, or escaping therefrom, and the hardy souls such as the fuel boats struggling through.  We were just wondering whether it was time to pop up to the boat again when the snow came.  Dave went up to Droitwich a few weeks ago to check things, but on Thursday the decision was taken out of our hands.  The ‘Beast from the East’ was bitterly cold but dry, then Storm Emma dumped her stuff all over us and unsalted roads quickly became icy and dangerous.

The lowest outside temperature we have recorded was –6.1, though the strong winds have made it feel much colder.  We are not on mains water and the pipe leading from the pump (which raises water from the well) froze over Wednesday night, leaving us with only half a tank of water.  It took Dave nearly an hour to unfreeze it on Thursday morning and then repair the insulation which had become damaged over winter.

Meanwhile I was looking after the birds.  I had been planning a lovely apple crumble using our stored apples from last autumn, a bit wrinkled but perfectly good for cooking and a full tray still remained.  I put a few out for for the blackbirds then it all got a bit Hitchcockian…… 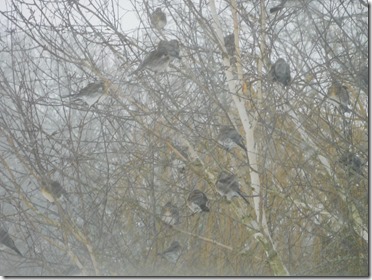 Fieldfares are shy birds and don’t normally come so close to habitation.  At a rough count of 40 it was quite threatening when the flock descended all at once on the two apples on the patio!  The poor blackbirds retreated hastily.  Fieldfares are much bigger than them – the apple in the first photo is a large Newton Pippin if you are into apples, a bit bigger than the standard Bramley you get in the shops. 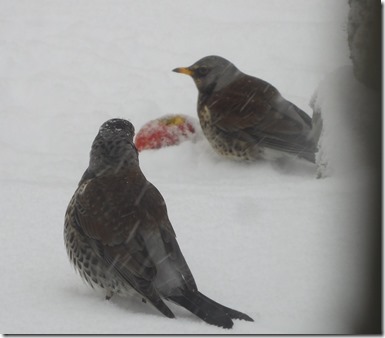 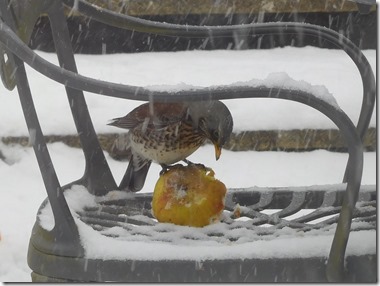 There was a bit of squabbling as they waited for their turn for a peck or two. 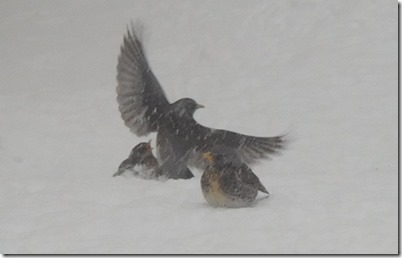 But mostly they just hung about, waiting.  By now I’d put out half the tray – the rest I’ll keep for Friday. 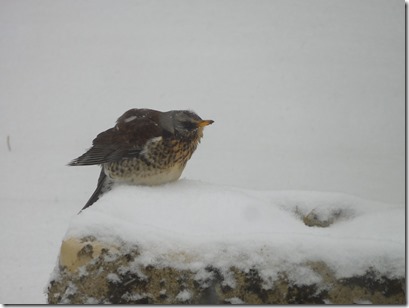 Then a couple of them discovered the last of the berries still hanging on to the frozen cotoneaster outside the kitchen window. 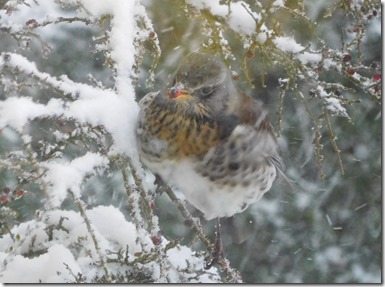 The overnight temperatures were not so low – it was about minus 2 when we got up on Friday – but there had been freezing rain overnight.  There seem to be conflicting accounts of why that occurs rather than snow, but the gist is that rain becomes super-cooled (still liquid but with a temperature below zero) as it falls through the cold atmosphere.  Then it freezes onto whatever it hits.  Trees, cars, brickwork, snow; when I let Meg out first thing her thin little legs broke through a brittle crust of ice 2mm thick.  She was NOT amused. Mum! I’m up to my armpits and it hurts! What's going on? No photo – that would have been unkind - and we had to clear a patch of grass so she could have a wee.

The ice has formed a glaze on the trees – very pretty but I just hope it didn’t freeze birds to their roosts as happened in 1947 (so our teacher told us at school during the big freeze of 1962/63).  I saw a pheasant with a clump of ice stuck to its tail, though it could still fly, just.  But there might be a lucky fox later today …. 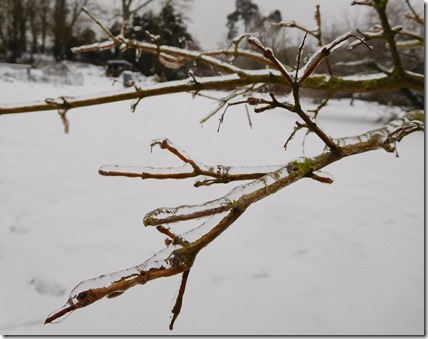 Any surface without snow – there are quite a few because the strong wind drifted the snow away – has a glaze and we have icicles – I don’t remember that happening before!  I hope you liveaboards escape this, it could freeze your doors shut! 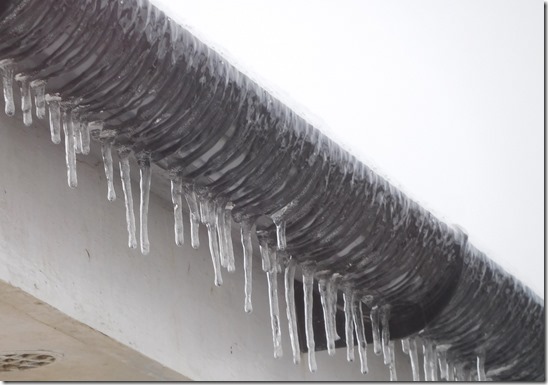 Oh yes, the Ship Canal.  Our son Tom sent us this photo of the Exeter Ship canal, which he took looking across the canal to the river. Correction – the ice in the foreground is actually part of the flood relief channel, and the canal is some way behind the camera.  But the canal was still frozen. 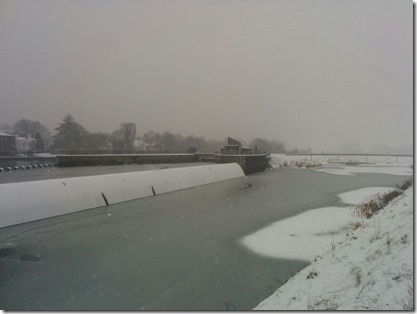 and a panoramic view

The river itself, pretty wide in Exeter, is a bit sluggish …. 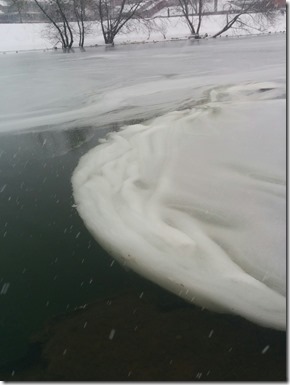 The thaw set in with a vengeance this morning. Six inches of snow and hours of rain is causing local flooding, including of our garden and garage. 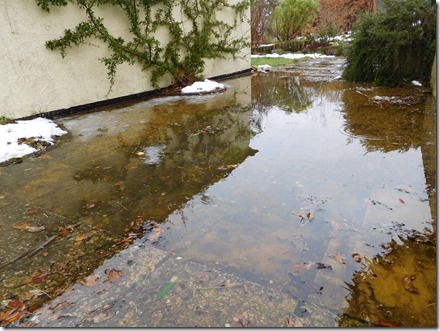 The temperature is above zero but I’ve still got my thermals on.  Keep warm!