We had an excellent night’s sleep, the weather being very still, so there was no scraping along the Shroppie shelf, and it was a really comfortable bed too.  The morning was chilly though.  We set off around 9.30, aiming to reach Brewood at about 11 to get a Sunday paper and some milk.  Wheaton Aston lock was ready for us, so we were speedily on our way.  Industry Narrowboats near Stretton Aqueduct is always interesting to look at and today there were various boats on the wharf having work done and the Fellows, Morton & Clayton Plover moored alongside. 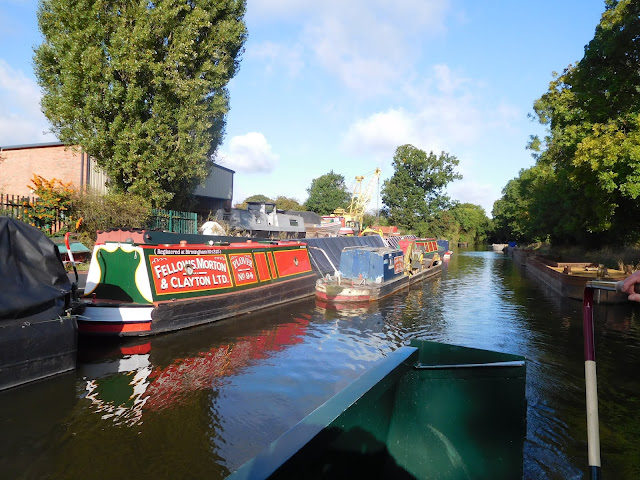 A long time ago we came past here paying too much attention to the yard, and ran aground just before Stretton aqueduct.  Those were the early days before we knew that the cardinal rule when you run aground is not to try and drive off forwards!  I ended up standing knee-deep in the water pushing the bow out and then hauling myself back over the gunwale into the well deck.  Strong arms and shoulders in those long-ago days but such bruised ribs!  No such problems today. 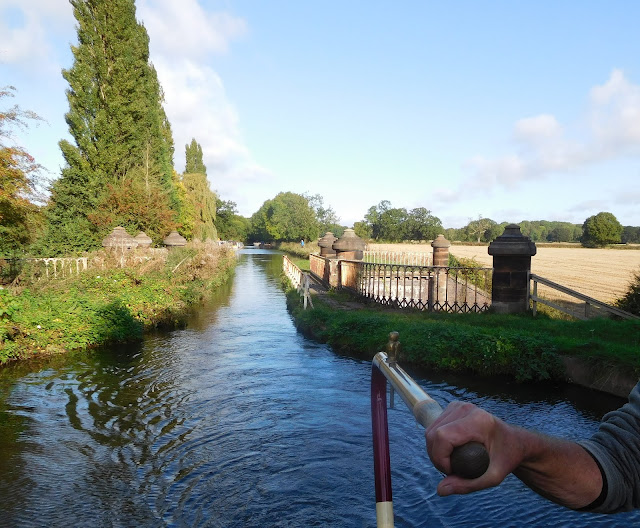 About a mile from Brewood a boat was coming towards us.  I was just about to comment on the familiarity of the cratch board and the attractive livery  … it was Chuffed!  What are the chances of meeting her on our first return to the waterways? 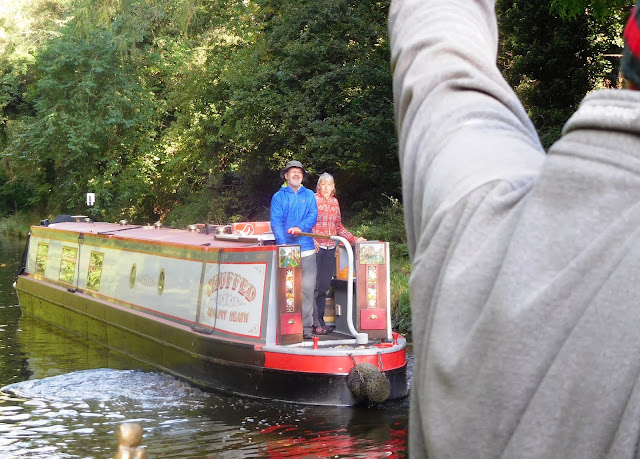 We waved and shouted ‘that’s our boat!’  Of course it isn’t any more.  But we both moored up and met Amanda and Ross, her new owners.  They are delightful and we were quickly reassured that they are the right people to be her new owners.   They have booked in for a repaint next year, which needed to be done, and will keep the lovely grey but will opt for a darker shade of red, which will not fade so badly, for the handrail and coachlines.  They will also remove the words ‘Coalpit Heath’, which is where the first owners lived, and we never got around to getting rid of it!  It should all look wonderful when it’s done.  We chatted for almost an hour and exchanged emails.  We really look forward to meeting them again when she has her new paint job and a spanking new pram cover!  Maybe by then we’ll have a boat of our own …. 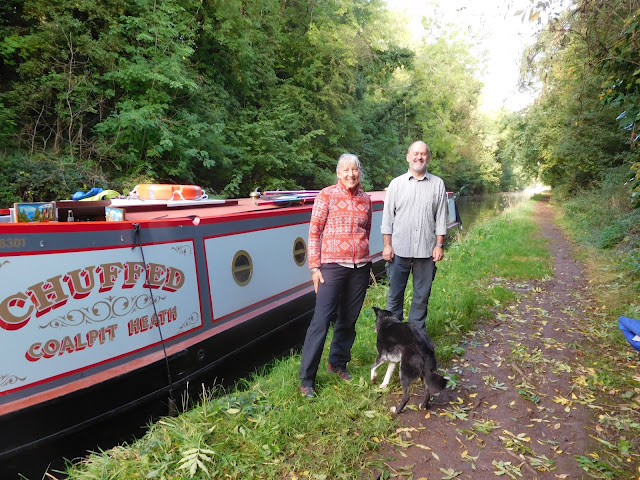 Amanda and Ross, and Meg getting in on the act too

By the time we got to Brewood it was lunchtime so we had a break and got some milk and a paper.  The village was quiet enough for a pony and trap to be waiting outside a pub for the driver. 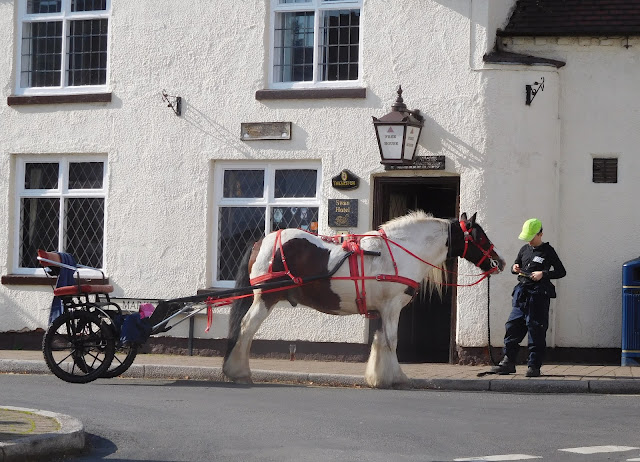 The afternoon was sunny, which was great and we had a lovely cruise down towards Autherley Junction.  Avenue Bridge is the unexpectedly ornate bridge where the canal was cut through land held by Chillington Hall, whose lodge appears on the Nicholson’s map but the hall is off the map.  We once walked up onto the bridge, and it doesn’t look as though it has ever had more than a footpath over it. 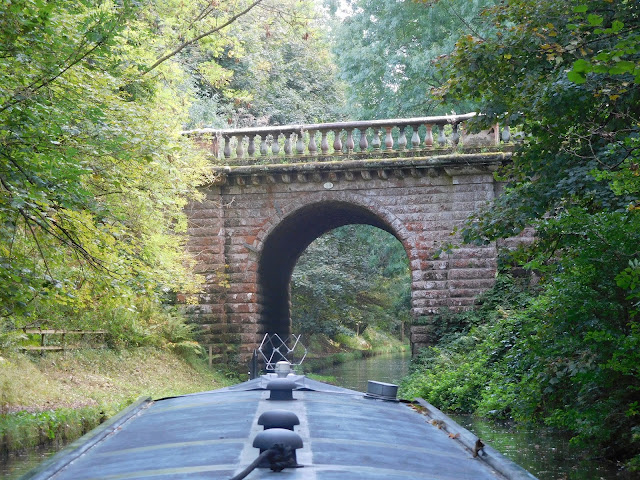 We were soon at Autherley junction, through the stop lock  - it is difficult to tell just by looking whether you are going up or down here, the drop is so small -  and round the turn to pass the allotments on the way north.  A couple of plots had these hugely tall grasses – far too tall to be sweet corn, and not bamboo, but maybe they were sugarcane?  I know this can be grown here, not for producing sugar in this climate, but as biomass to put on your compost heap, but I’ve never seen it growing. 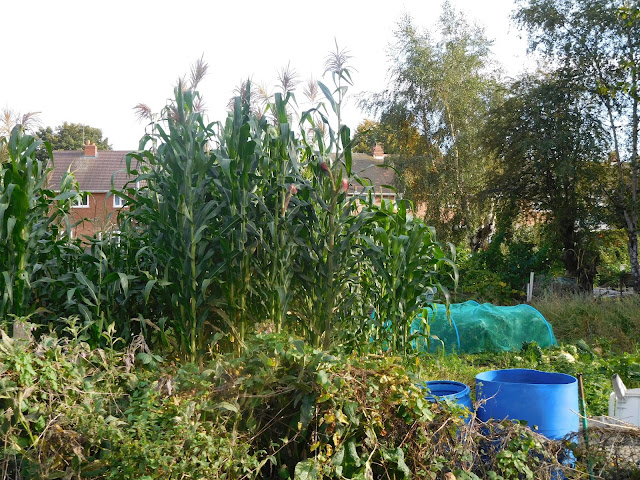 The next excitement was the narrows once known as Pendeford Rockin, according to Nicholson’s, after a local farm.  It is indeed very narrow, but does have a couple of passing places which we had no need of today. 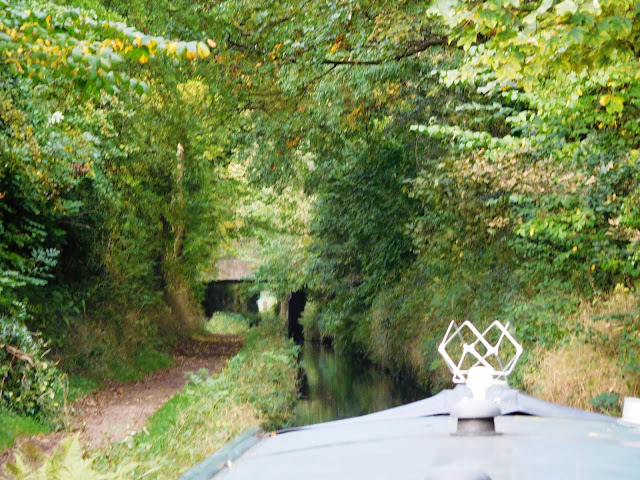 Under the M54 we went, where a talented graffiti artist has made his/her mark. 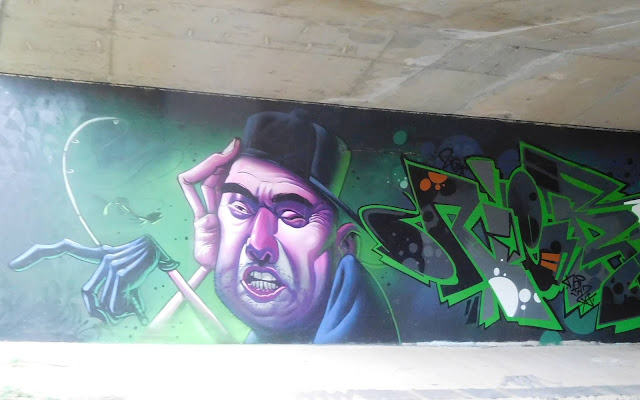 We carried on a bit to get further away from the motorway and moored after bridge 69.  It’s a little bit noisy here but it was time to stop.  I cooked chicken paprika for tea, well it would have been if I’d remembered to pack some paprika!  That’s the sort of thing that would have been on board already on Chuffed.  Tricky business this hiring, I’m sure we’ll discover other things we’ve forgotten this week.  At least we'd asked for fenders and piling hooks, so we could moor easily and comfortably.