In a bit of a jam

Unexpected rain first thing messed up the morning’s plans for painting, but when it stopped we washed down the starboard side - the wind helped dry it quickly – and then polished it between us.  Then I cleaned the windows inside and out while Dave did a trial of mixing paint to touch up the rust spots on the pale grey paint.  Getting a tin of a matching colour has proved impossible, so as it’s just a couple of small areas he tried a bit of blending with what we’ve already got.  It’s not a good match but at least it’s protected for the winter. 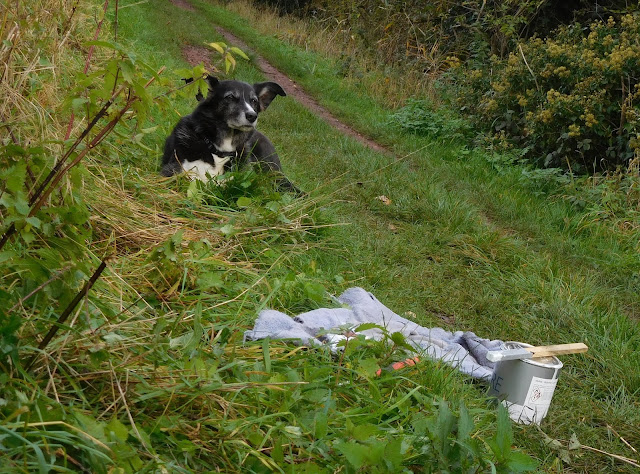 Keeping an eye on proceedings

We had lunch, then went up the bottom two locks to the winding hole.  While Dave trundled off to wind, I waited at the lock and had a look at the lock cottage garden.  The flowers are going over now; the sunflower looks rather dark and sad in this photo, and I hope it is being left for the birds. 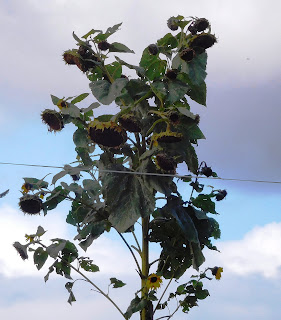 Ours at home have had half the seeds eaten already, but we’ve never spotted the diners in action!  Then I turned to take a snap of Chuffed – 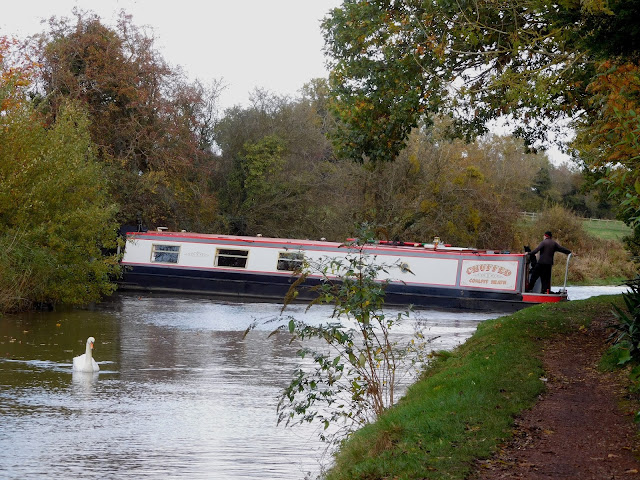 - before realising that things weren’t quite going to plan.  The wind had been rising all morning, and before he could get the bow right into the very narrow offside of the winding hole, he had been blown broadside out of  the winding hole and the boat had stuck across the canal.  Oh for bow thrusters!  I hared up the towpath and lifted the stern button, so he could get unjammed, then hauled on the stern rope to help him get an angle and put the bow where it was supposed to go.  A bit more hauling, and I hastily coiled the rope and chucked it at his feet while he was close enough as we certainly didn’t want it round the propeller; if he’d been any further away he’d have had to drop into neutral to recover it and risk getting blown off course again.

As the wind was coming straight at us, the rest of the trip was almost incident-free.  As we passed last night’s mooring I took a photo of the lovely rose-hips opposite from a closer viewpoint. 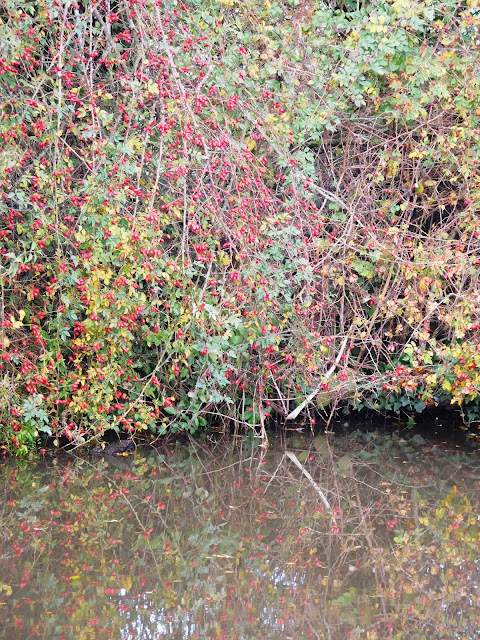 Before the junction we passed a boat (from somewhere further north, I can’t remember where, or what its name was – with this decorative ropework. 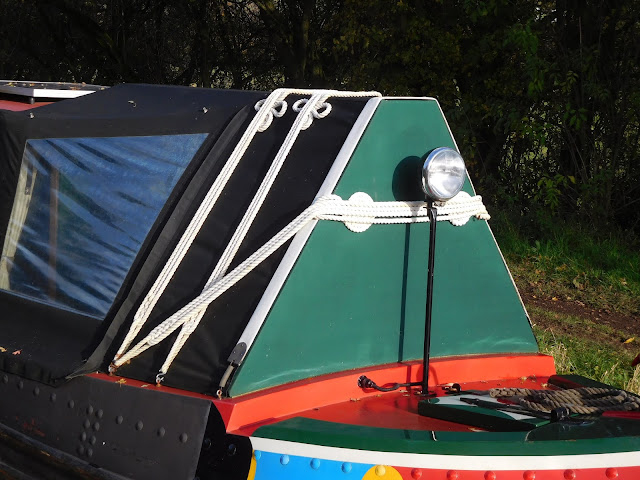 The bridges at Hanbury junction shielded us from the wind and we could appreciate the sun glowing through the autumn leaves before we turned. 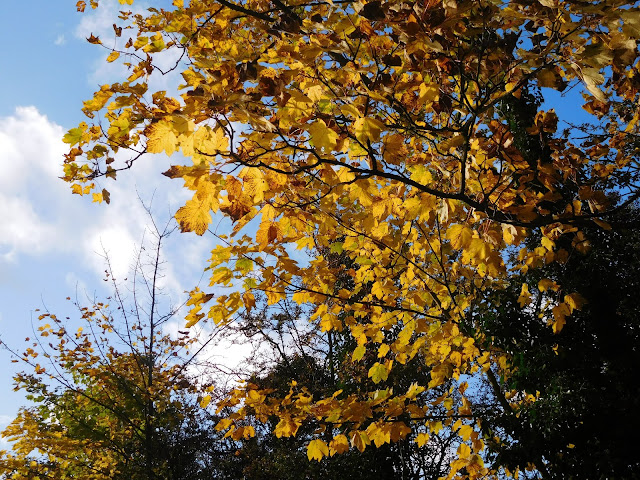 The volunteers were still on duty at Hanbury locks, so we had a bit of help to go down, which was very welcome.  We also picked up Meg’s ball from outside the hut. She had dropped it into the empty top lock yesterday as we walked back from Droitwich.  Yesterday’s volunteer said he’d retrieve it when the next boat came up, which he did, so if you’re reading this, lovely lockie, woof! thank you very much! 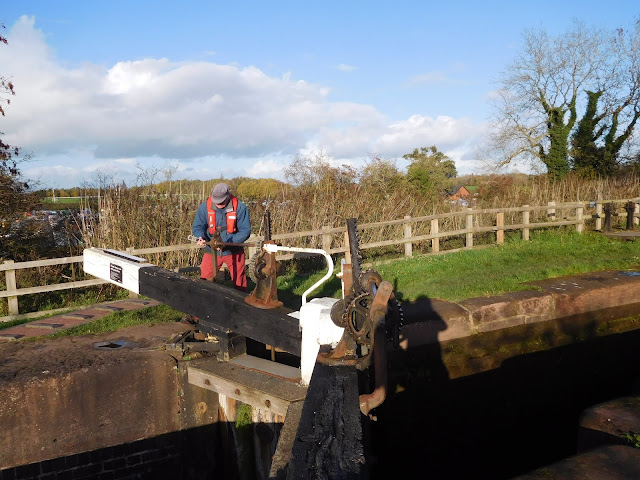 Then it was the not inconsiderable task of getting onto the wharf in the marina.  If there is any wind on the cut, you will find it stronger in a marina.  If we hadn’t had to top up with diesel before leaving the boat for the winter (to minimise the risk of getting diesel bug), we wouldn’t even have tried to get on it.  I needed lovely Kevin from the office to come and help me get tied up.  Even so, Dave got us into our berth quite quickly (and no-one watching of course).  Very much a bow-in sort of day – trying to reverse in would have been asking for trouble!

It wasn’t raining at the time, so he managed to paint the port side between the gunwales and rubbing strake.  I got some of the packing done and into the car and dealt with the recycling and rubbish – doubtless there would be more tomorrow, but the forecast was awful.  There were showers to the west of us, but we still had the sun – and a lovely rainbow. 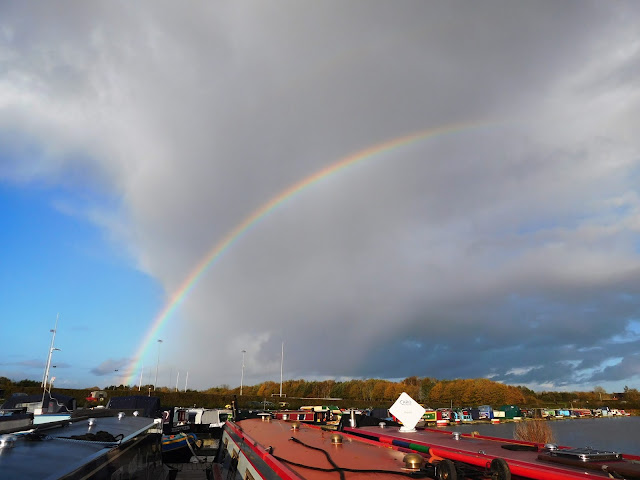 The port side still needs washing and waxing, but with lots of other jobs easier to do when it's not raining, it will have to wait till we can get back up again.  At least it is on the pontoon side.  Dave managed to get all the engine bits and pieces sorted in the dry. 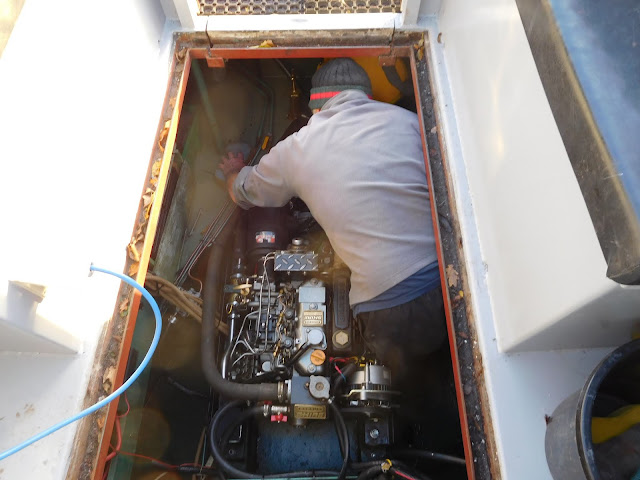 We got the tonneau cover on in readiness for the rain on its way.  We'll have to remove it temporarily tomorrow when we lock up and leave, but even if it's raining then it' will have kept the stern and bilge dry in the meantime.  We lit the fire as the moon rose above the marina.

The following day, we finished the packing – all the food items except a few tins and bottles, all the bedding etc – and in between the heavy showers got the car packed.  All the cleaning got done, including the shower pump reservoir, which is a horrible job, then emptying the water tank, opening taps etc before we left.  We were expecting another lockdown to be announced, (we know now it will start on Thursday 3rd November) so we didn’t want to be caught out if there is a cold snap and we can’t get back up again.  We’d left for home before three, expecting to be past Bristol before the rush hour was at its worst …. only to see warnings on the gantries of hour-long delays.  Trying to find an alternative route round Bristol in the rush hour, on unfamiliar roads in the pouring rain, would have been plain stupid.  We were just joining the crawling traffic when beep! the engine warning sounded and the car dropped into ‘get-you-home’ mode.  This limits the engine to 1500 revs which is no fun on the long slow hills on a motorway.  The incident causing the delay turned out to be a bus which had caught fire many hours before.  There was nothing to see when we got there but two closed lanes – we found out later the inside lane would be closed till the next day as it had to be completely resurfaced.  It added an hour and a half to a journey which is normally 3 hours or less.  And a large dent in the wallet to get (another) fuel injector replaced.  Fingers crossed we will have changed to a petrol-driven car before our next trip!

We travelled 24 miles, 2½ furlongs on the Droitwich Junction and Barge Canals, the River Severn and the Worcester and Birmingham canal. This was made up of (thank you Canalplanner) 13 miles, 7¾ furlongs of narrow canals; 5 miles, 7½ furlongs of broad canals; 4 miles, 3¼ furlongs of large rivers.

Of the 5 moveable bridges, we had to open only 3, in Vines Park.  Another in the park is permanently open (the only other on the Droitwich Barge canal is not in a condition to be operated).  The 5th is below Diglis locks where the Worcester and Birmingham joins the Severn, but that would only need to be swung for a very tall craft. The 4 tunnels were for the M5 and Impney Way in Droitwich, the A449 at the Hawford end of the canal, and then Dunhampstead.  Canalplanner now gives you another interesting fact which I haven’t reported before – ‘a total of 2 furlongs underground’.  Except that long road-bridge tunnels aren't really underground!

Apart from the days when we crossed, or were passed by, flotillas of hire boats, the waterways have been rather quiet this trip, even though it was half-term.

Too damp for outside work

The clocks went back last night, and we had a relaxed start waiting for the rain to stop, before leaving at about 10 to move up to Hanbury Junction.  The autumn colours were lovely as we approached Dunhampstead tunnel 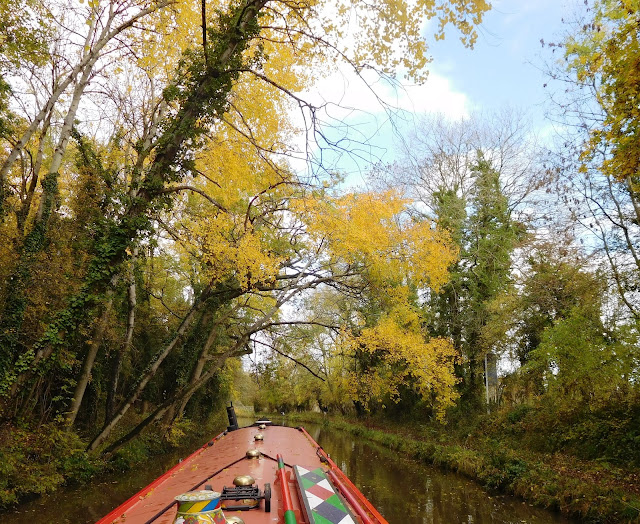 and again as we came out. 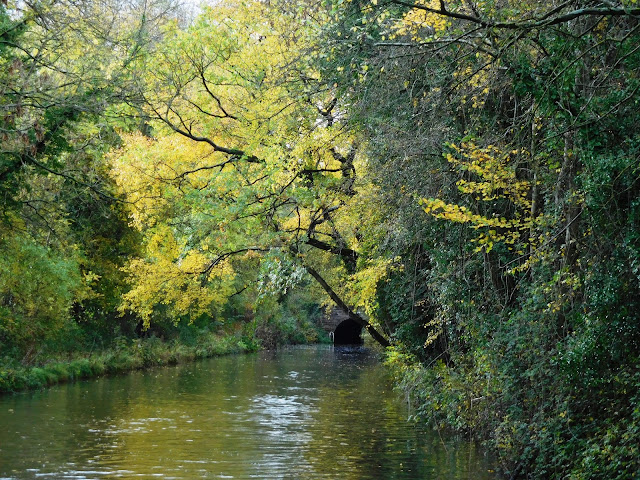 We were not going back to the marina today but we did need some shopping, so we moored on the Worcester and Birmingham at Hanbury Junction and walked down the towpath into Droitwich, where Dave and Meg played in Vines Park for ten minutes while I nipped into Waitrose for some bread and the Sunday paper.  The towpath at the Rugby Club Bridge by the marina was closed for repair last time we came this way, but now it’s all done – one example where it was worth the hassle (and the bike-friendly surface) as the paths used to get extremely muddy in winter - and if you want to walk up to the pub from the marina you can do so now without getting muddy. 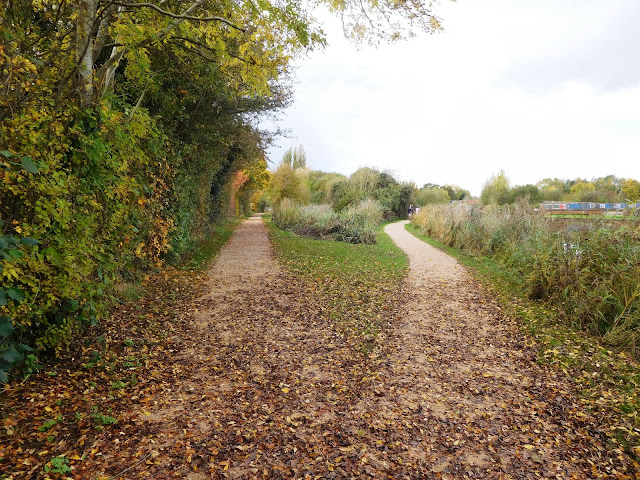 The paths were closed while the work was being done, as there was insufficient space for social distancing between walkers and the CRT workers.

We'd seen black clouds building up in the west while we were still in Vines Park, so hot-footed it back and just beat the rain to get inside for lunch, where we warmed up with left-over stew (sadly no dumplings, but we made do with toast😉).  The rain didn’t last long, and we soon moved up to the quiet stretch below Astwood bottom lock.  It was still chilly and damp, unfortunately not good weather for outside work, such as the painting and polishing that needs doing.  We’d lit the fire by 4 pm and hunkered down.