The gales had abated, and we could have got out of the marina, but it was still unpleasantly cold and windy, and with the wind in our faces it would have been uncomfortable cruising.  With thoughts of the muddy towpaths and how filthy Meg would get, and having to come back to the marina tomorrow anyway, we decided to go home.

So we had a sit down, made a long list of jobs that would need doing next time, packed up and went home.  We stopped at Gloucester services, which were as busy as if it were the school holidays.  No-one seemed to be trying to keep any kind of distance from anybody else, and I didn’t notice any extra-careful hand-washing either!

So, when will we be able to return?  This morning (Sunday) it was reported that over-70s will be expected to self-isolate for “up to 4 months” to protect themselves and curtail the spread of Covid-19, though later on that was clarified to “not yet”.  Part of me thinks it would be better for us to get it now, while we are fairly fit and healthy, so we have some immunity for next winter when it will doubtless make a return.  Wouldn’t it be great if a vaccine has been developed by the time our flu jabs are due?

Keep well everyone.
Posted by nb Bonjour at 04:53 No comments:

This happened last year too.  Without bow thrusters it is difficult to manoeuvre in a marina in a strong wind, and we decided to get on with some more jobs instead of battling the wind and getting cold.

It was quite stormy last night, with heavy rain and strong winds biffing the boat about.  It was sunny when we woke up but the winds hadn’t abated one bit.  After breakfast we made a list of jobs, the most important being to get the Mikuni central heating working.  A water pipe had got dislodged yesterday, which Dave had replaced, but with the boat toasty from the fire we didn’t run it.  This morning, fearing he might have to get it out and take it home to repair it, Dave was relieved to discover, after trying several times, that it worked – it seems most likely that the stale diesel was working its way through the fuel pipe and eventually the fresh stuff had got through and everything was fine.  I took Meg off for a short walk and a game of ball.  On the bank below the motorway I noticed something very strange.  What is a Torbay Palm doing on a motorway embankment? 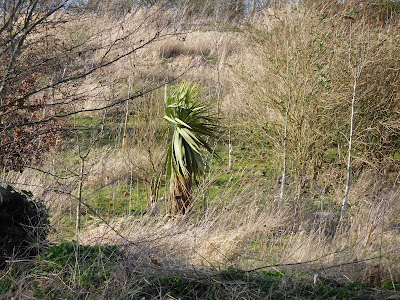 I’ve only ever seen them in people’s gardens, the parks in holiday towns and along seaside promenades.  There are still a few by a row of cottages partway down the Wolverhampton flight, where many years ago a couple used to bring one home from every holiday in Torquay and give them to their neighbours.  We met the old man, by then a widower, as we locked down many years ago. There was a whole row of them, but most gardens have been paved over for parking now.  Here, I suspect someone came along and dumped their garden waste while the M5 was still being constructed.

Dave spent quite some time dismantling the taps in the bathroom, which were all very stiff after the winter.  After a good clean they are working a lot better.  I went to buy a bag of coal, £10.50 for Excel.  After lunch Dave took Meg out for a proper walk.  I took my laptop to the boaters’ lounge above the office, where you can use the wifi – on the boat you can access the internet on your phone, but the signal is not enough to tether it to use your laptop.

It’s a lovely place to be up there – comfortable, warm, you can make yourself tea or coffee and borrow a book.  Which I did, and started it while my laptop was doing a long-winded update. 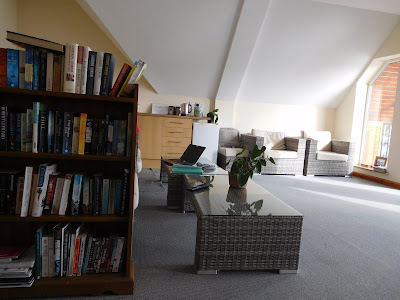 And it’s got a nice view too, and a balcony for the better weather. 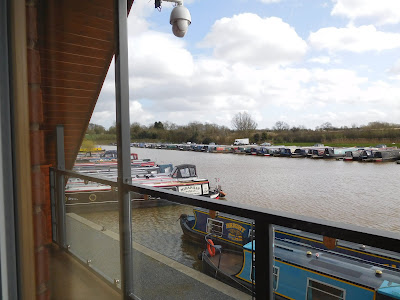 Later on we realised we had no spare batteries for the excellent motion-sensitive light in the cratch, so I walked down to Waitrose.  Luckily we didn’t need loo rolls, as the shelves were bare, but I did get some yeast and tomato puree which we are running out of and which had disappeared from the shelves in our local supermarkets at home.  The walk there was directly into the wind and I was cold.  The hawthorn leaves are emerging but of course the wind doesn’t show. 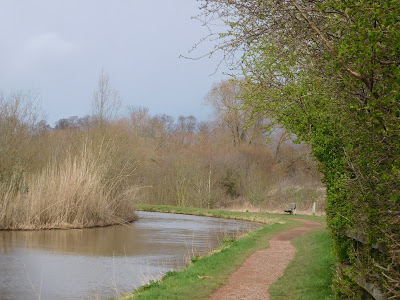 Even in their sheltered spot, the catkins were shivering in the wind. 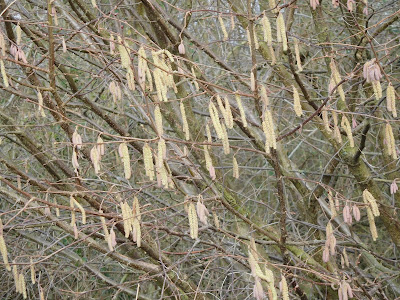 When I came out of Waitrose a shower was just passing over and there was a splendid rainbow, but of course by the time I’d crossed the road and got the camera out it was fading. 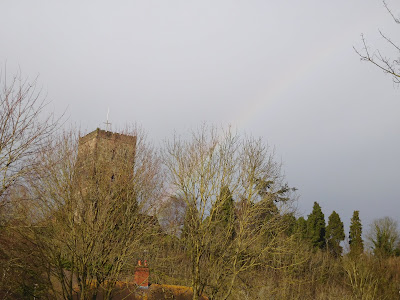 The weather forecast for tomorrow looks much calmer.  We may go out for a little cruise, but it would only be for 2 days as we have to be back home on Sunday.

And neither did B and C.
Plan A was, as usual, to come up before January to finish winterising the boat and bring home the bedding.  There was a lot going on before Christmas and it didn’t get done, but it would happen in January, wouldn’t it?  Well, no.  Dave broke his hand just after Christmas, and I had developed golfer’s elbow through lugging heavy shopping and grandchildren about.  So Dave couldn’t even drive the car and neither of us was capable of doing anything heavy or fiddly on the boat, let alone operate locks.  Then there was the little matter of the weather, so we crossed our fingers and stayed home.

As a big freeze seemed unlikely, we waited for a suitable gap in the calendar when it wasn't pouring with rain.  Hands are very complicated structures and damaged ones involve plenty of NHS time to get them fixed, so any trip had to fit in with Dave's appointments.  So plan C!

Yes, plan C.  Arrive at the marina by lunchtime, plug the shoreline in to give the batteries a boost, replace the bedding if necessary (it had got a bit musty so we were glad we'd brought a complete replacement set along), and do the usual checks.  This should leave plenty of time to get up the Hanbury locks and along towards Worcester for an hour or two to finish topping up the batteries.  However ….

Getting into the boat took a little while – one of the bungees on the tonneau cover had failed, and not only did a large pool of water have to be baled out (dog bowls are so useful), the cover had grown a layer of green slime and had to be dried off before packing it away - it was too windy to clean it properly today. 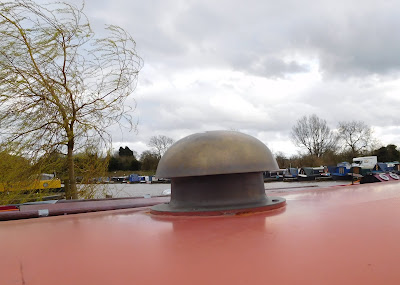 The brasses were showing the effect of 4 months’ neglect too.

Then the shoreline didn’t work.  There was a fault in the pillar, meaning marina owner Nick (the multi-talented farmer) ended up dismantling it and replacing its innards.  By the time we could switch on the shore power it was already past 3 o’clock.  As we hadn’t wanted to run the engine to charge the batteries because our next-door neighbour lives aboard, we stayed put in the marina.  Dave soaked up the water in the engine hole with a sponge and wads of newspaper – amazingly the tonneau cover had not dumped any water on the stern deck, so not much had got in – and I took Meg off for a walk. One of the ways towards the towpath was still flooded. I had my back to the canal to take the picture. 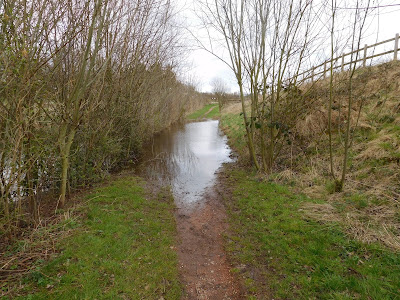 But the main towpath was reasonably dry underfoot.  We went as far as the first lock beyond the motorway tunnel, where the canal is joined by the river Salwarpe for a stretch.  Another blogger (I can't remember who) showed a photo earlier this year when the river had risen above those arrows.  Today it is back to normal, but we hadn’t intended going towards Droitwich in case Barge Lock couldn’t be opened – the river sometimes washes so much silt down it stops the top gate opening. 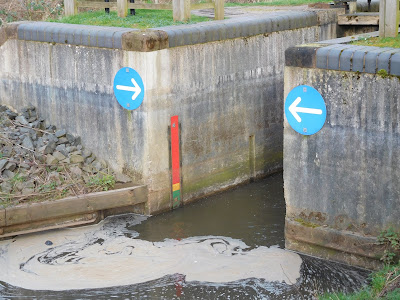 The coltsfoot was in bloom.  The flowers appear before the leaves, which are shaped like a horse’s foot.

A cursory glance could mistake it for a dandelion, another plant named for its resemblance to a bit of animal – lion’s teeth, dents de lion.  I like the country names for it, pissabed, pissenlit.  It's a diuretic, if you haven't already guessed!

The wind was strong by evening and it was getting cold.  After dark it poured with rain.  But with the fire going since the afternoon, we were snug.
Posted by nb Bonjour at 07:41 No comments: