We slept well, not getting woken by the cold as we did last night, or a peculiar noise as we did in the marina the night before, when Dave got up and opened the side hatch to see what was happening and there was a large carp abruptly flipping round with an almighty splash and heading out to open water.  It must have been grazing the algae on the hull.

I took Meg over to the park for her morning outing, then we were visited by our first ducklings of the year, a large brood of twelve. 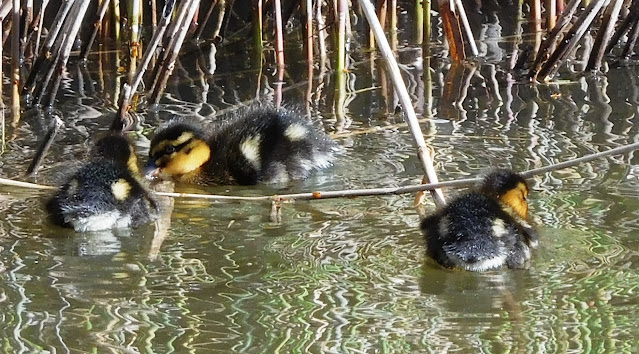 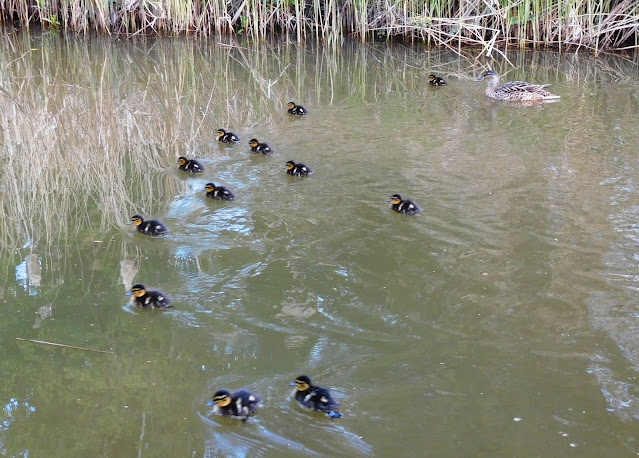 All twelve of them!  How long will they last?

I walked through the tunnel under the railway and up the alley to buy a paper.  M&S foodstore was closest, but don’t open till 10.30 on a Sunday, and Lidl too but they don’t do papers, so a trek up the hill to Sainsbury's it was (granola bars and choc chip cookies may also have found their way into the basket).  After another cup of tea we finally got going at 11, dropping down the first Bilston lock and spotting someone coming up the second.  We met two more boats at each of the Gregory’s Mill locks so had an easy passage.  The swans are nesting between the two flights, and there are notices on Gregory’s Mill top lock not to let them through – it’s another’s territory down below. 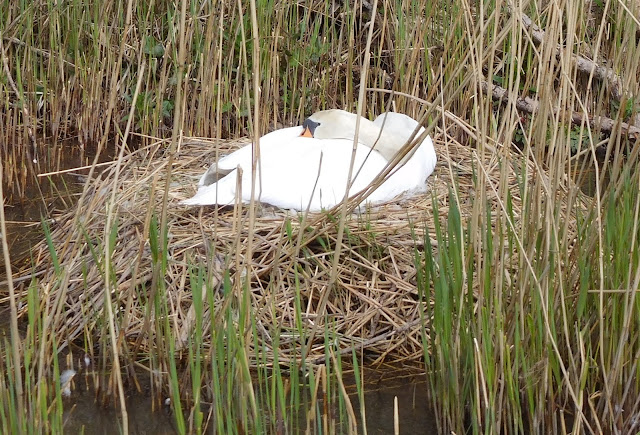 Below the bottom lock were some grapple/magnet fishers.  I could see them trying, and failing, to haul something heavy to the side as we dropped down the lock.  They thought it might be a motorbike; the little lad solemnly informed us that they had already pulled out 2 knives. 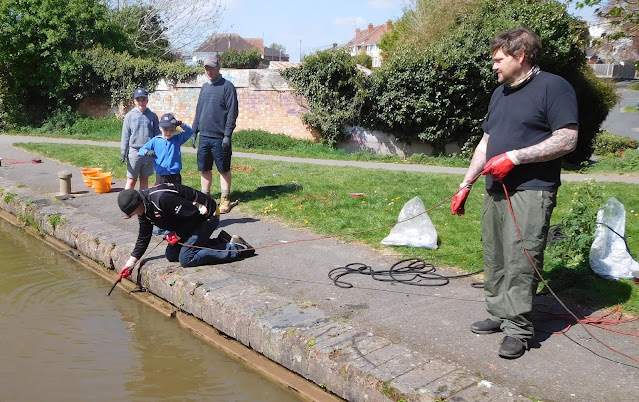 We just hoped the motorbike, or whatever it was, stayed out of reach of boat propellers!  We had planned to stop at the park with the mural for lunch, but meeting the other boats had saved us time so, anticipating Blockhouse lock would be set for us, we went on.  It was indeed, so it wasn’t long before we had moored at the Commandery and were preparing lunch.

We walked down to the river in the afternoon, downstream past Diglis river lock to the footbridge, and crossed the river to see how the fish pass construction was progressing.  It looks finished and ready for fishy action, but the area is still fenced off to people though it’s not obvious why.  This is the most you can see. 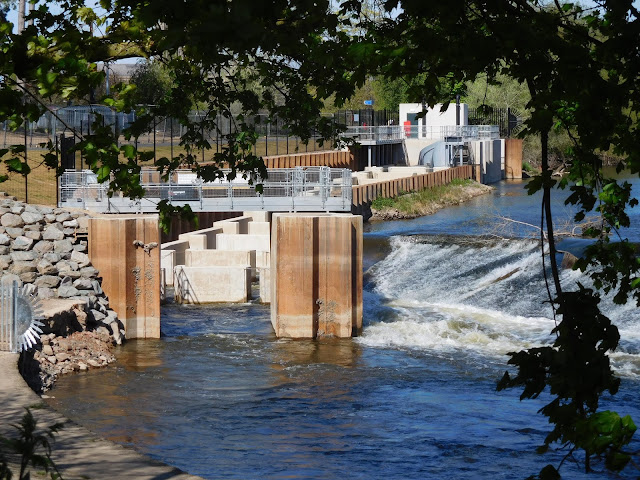 We're looking forwarad to when the viewing window will be open.


On our way back we admired the cherry blossom by the flats overlooking the river.  Check out that glorious sky! 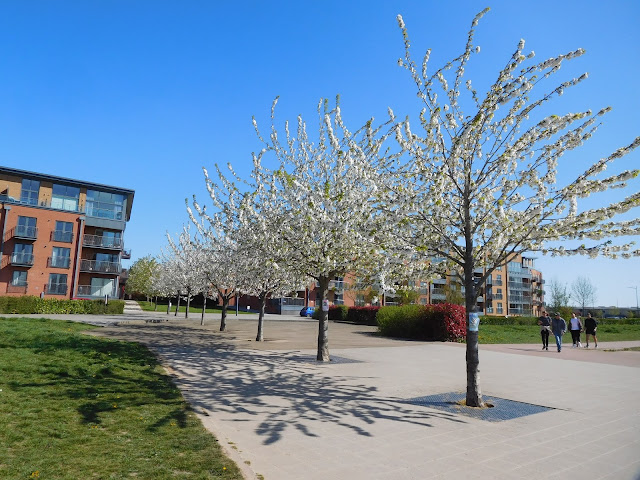 We fancied a pint in, or rather outside, the Anchor by the basin but it was very crowded so we went back and had a cup of tea instead.

Without Sky on the boat, Dave is having to listen to a footy match (Spurs v Man City, some cup final or other) on radio 5live.  It’s very stressful.

Before it got dark, three inebriated City supporters wove their noisy way past our window.  Dave glowered at them (discreetly).

On the move at last

It was jolly cold last night in the boat.  The outdoor thermometer gave a minimum reading of 2.8 degrees, but it was largely our own fault as neither of us noticed that the sliding hatch hadn't been lifted over the door until the morning sun was streaming through the gap at 6.30!  So glad the Mikuni is working properly so I could switch it on and get back into bed till the radiators were hot.

After breakfast I went down to Waitrose and came back along the main road, Saltway, to the Veg Shack - it's just a house with a veg stall outside, and at the moment I doubt it's their own produce.  I was hoping for rhubarb (no luck) but got a big bag of excellent purple sprouting broccoli for £1 in the honesty box.  Just past the house is a footpath that cuts through to the car park at the Rugby Club bridge.  It crosses the old line of the canal before it was restored. 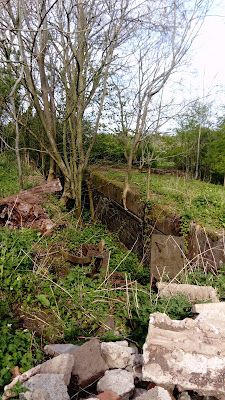 In the meantime Dave had readied the boat for the off.  The engine started first time and was running smoothly, so after a chat to our next-door neighbour Jayne we were off.  Another boat went out ahead of us into the bottom Hanbury lock, but with 3 volunteers already on duty we were soon up. We turned right at Hanbury Junction onto the Worcester and Birmingham on our way down to Worcester.  The sun was glorious.  We stopped for an early lunch just past Oddingley (where the best spots were taken).  We saw our first swallow of the year yesterday, there were several more today and a lark was singing when we stopped.  We were on our way again soon after 1, through Tibberton where the moorings were largely closed last October for 'towpath improvement'.  It's good now for wheelchairs and prams, and very popular with cyclists as you can imagine. 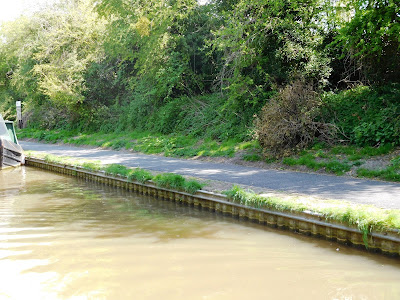 We had only seen three boats on the move all day, so we weren't surprised when most of the Offerton locks had drained themselves.  At the top lock, which you can just see from the M5 if you know where to look, a group of people were inflating their kayaks.  Not a good picture though, it was a bit of an afterthought.  The tarmac continues right down the flight. 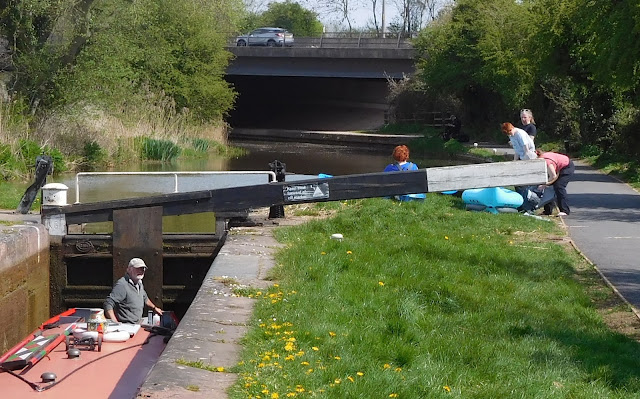 I asked the lady with the blue one how robust they were, knowing what a sharp twig can do to boat paintwork!  She said it was only the 4th time she'd been out and she thought she'd already picked up a slow puncture.  It was only £40 - not quite disposable or single-use then, but I wonder how many quickly get damaged and chucked away?

The lock house at the second lock seems to have been sold.  A chap was hauling a bucket up to water his plants, pleased I was filling the lock! and kindly closed up for Dave so I could lock ahead.  Most of the top paddles were pretty stiff so it was a bit of a shock after 6 months of no boating.  But the flight isn't difficult.  Wild flowers are blooming before they get strimmed to oblivion - these two were growing along the flight.  They are both the caterpillar food plants of the little Orange Tip butterfly which is flying at the moment. 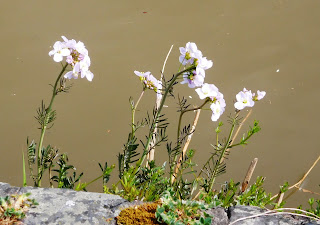 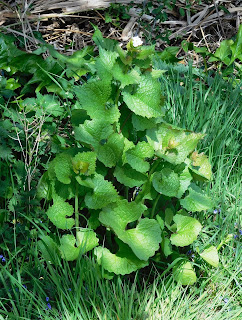 Jack-by-the-Hedge, aka Garlic Mustard which is supposed to be edible though I've not tried it

We were pleased to see our regular place at bridge 17 by Perdiswell Park had space for us - Meg as usual knew exactly where we were and was soon off the boat with one of her two new balls we retrieved from the canal today.  She's been a good patient girl today so Dave took her straight off for a play in the park.

The canal has been very quiet boat-wise, though as it's Saturday the towpaths were busy with families, cyclists and walkers.  The Canaltime time-share boats were coming out of their base at Worcester after we had stopped.  What a lovely day to start your holiday!

Well, there has been rather a longer gap than we anticipated back in October.  We should have been here last week, but the offer of our second jab last Saturday forced a change of plan, and then we had to stay put for the dentist a few days later.  You don't miss a dental appointment round where we live if you can avoid it!  With factoring in the collection of a new (to us) car from Bristol, it was all too much so we delayed for over a week.  But we, our family and our friends have stayed well over the winter and for that we are thankful.

Anyway, here we are, still in the marina as we want to make sure the batteries are well charged up on shore power before we leave.  Chuffed was nice and dry inside, though there had been some condensation on the chopping boards which had grown a bit of black mould.  I should have put them in a cupboard.  But the engine hole was clean and dry, as were all the soft furnishings.  We took Meg for a walk down towards Droitwich in glorious sunshine. 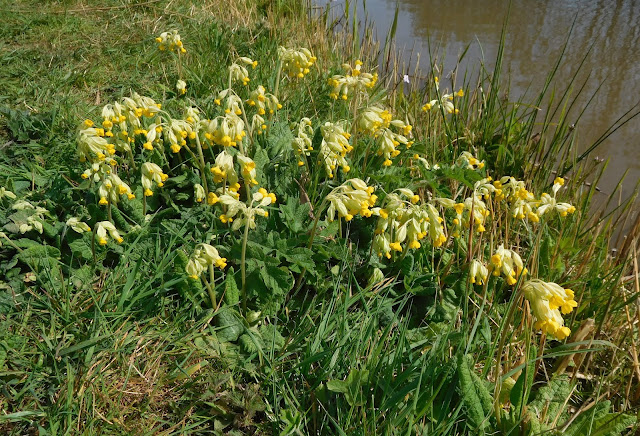 Cowslips by the Droitwich Junction Canal

There are plenty of owners around in the marina and we waved to Kay on NB Old Nick, the electrically powered boat that was featured in Canal Boat a while ago and is moored a few boats along from us.  But mostly we were just getting everything sorted so we can go out (we hope) tomorrow.  The boat was covered in dust, so Dave washed down the port side.  The Mikuni heater is working and the radiators didn't need bleeding.  The water tank is sorted.  We haven't tried the engine yet though .... that's for tomorrow. 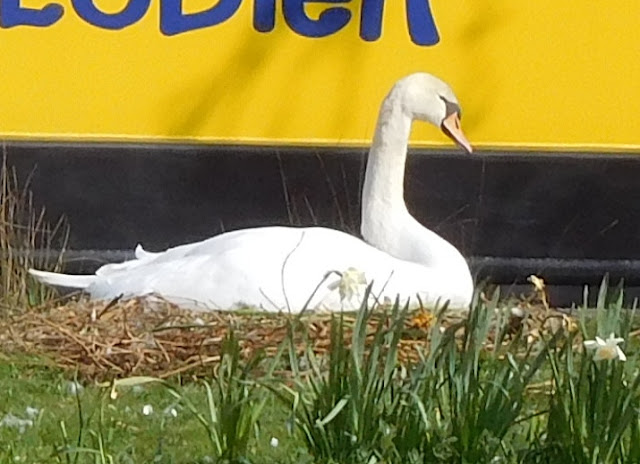