Saturday 15th November
Time for a canal fix!  Our nearest canal is only a few miles from home, but very short and with few convenient access points.  We moored parked at Salmonpool swing bridge, about a mile from the terminus in Exeter, having driven through a large industrial estate. 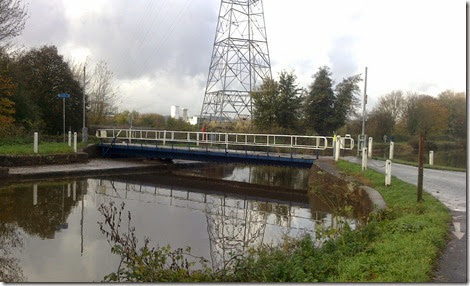 This is the view over the swingbridge towards Exeter, with the industrial estate visible to the left of the pylon.  To the right is a scruffy carpark, some changing rooms (I think) and playing fields.  If you turn round though you get a much better view … the startling reflections caught Dave’s eye. 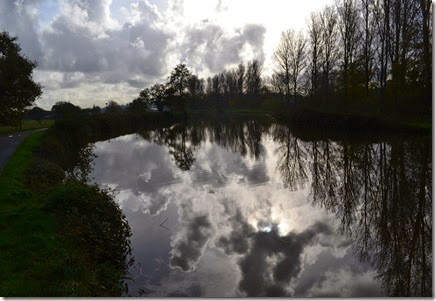 The canal terminus is below the city of Exeter and close to the river Exe.  Seagoing ships had sailed up the river to Exeter for trade, but some time around 1280 in the reign of Edward I, Isabella de Fortibus, Countess of Devon, had a weir built across the river downstream to power her mills.  Unfortunately for Exeter, this not only damaged its salmon fishery but also prevented ships getting up the river to trade.  So ships were forced to unload (and pay harbour dues) at Topsham, which itself became a thriving port.  Despite Exeter traders’ petitions to various kings, permission to remove the weir was not granted till 1550 – by which time the Exe above the weir had silted up and passage of ships was impossible.  So Exeter traders paid for a canal to be constructed and the first part of the Exeter Ship Canal was opened in 1566. This is what the Quay looks like today, from the canal basin side. 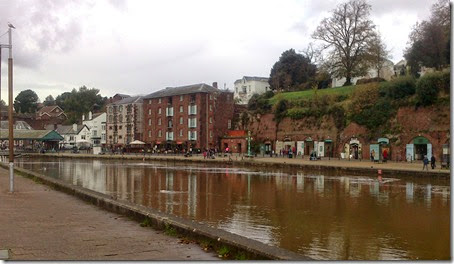 It is the oldest surviving ship canal in England.  To start with it was less than two miles long and had three locks – the first pound locks in Britain.  However, boats still had to pay dues to pass Topsham, and the canal could not be reached at all stages of the tide.  By 1701, however, it had been extended and the three locks were replaced by a single one, known as Double Locks. The cut was then 10’ deep, 50’ wide and could carry coasters of up to 150 tons. This is what Double Locks looks like today.  It’s huge – as well as allowing passage of sea-going vessels, it was also used as a passing place.  Max dimensions given in Nicholson’s are Length 122’, beam 26’3”, draught 9’9” and headroom 32’9”.  The lock itself is longer than 122’, but the canal basin (according to Nicholson) is only 120’ wide …..  I think one figure must be wrong there. 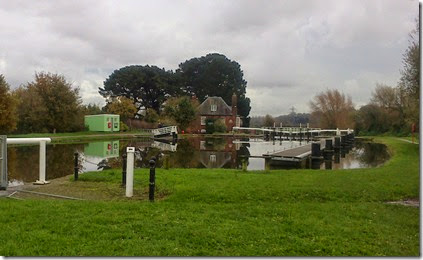 The white post nearer the middle of the photo is to lock the top gate closed – at the moment the top gates are locked open, and you can just see the end of the balance beam locked to the white post on the left. The pontoon to the left of the towpath runs along most of the lock and you can just see the bottom gates with the Double Locks pub below them.   The paddle gear looks familiar – bottom gates on the left, top on the right.

There is winch gear in place to operate the gates – they look pretty heavy!

In 1825 the canal was extended a further two miles as far as Turf Lock, where it meets the Exe estuary on the opposite side of the river from Topsham.  Exeter was a busy port, but activity started to reduce in the early nineteenth century when the wool trade ceased, and then of course when in 1861 the railway reached Exmouth (situated at the mouth of the river, as you may have guessed) its fate as a port was sealed.  However the canal was still used commercially after the war and the last commercial vessel sailed out of Exeter in 1972.
The basin today has been poshed up and the Piazza Terracina is an attractive square with restaurants, canoe hire and the Quay Climbing Centre nearby.  It is also the end of various races organised by local running clubs, such as the First Chance 10k, run in January, and weekly Parkruns http://www.parkrun.org.uk/exeterriverside/. The warehouses on the far side of the basin (below) used to contain the Exeter Maritime Museum. 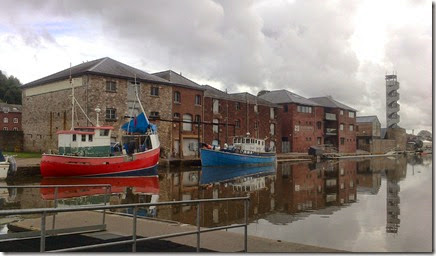 This was a fascinating collection of boats and ships of the world, which our kids loved - smaller things such as a coracle and dugout canoe inside, and larger craft in the basin outside.  Unfortunately it closed in 1997 but some of the collection can still be seen at Eyemouth in Berwickshire.  For more info and photos of the exhibits, see http://www.exetermemories.co.uk/em/maritime_museum.php.   The tower on the right of the picture is the climbing wall at the Haven Banks outdoor pursuits centre. 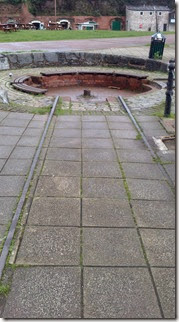 There are few other reminders of the basin’s busy trading past.  This is a turntable used for trucks which ran along the rails – there is another set of rails running off to the right along the side of the basin. One set is standard gauge and the other broad.  It was one of two turntables in use, and was excavated in 1985 as part of the 150th anniversary celebrations of God’s Wonderful Railway which ran through Exeter. (Still does though it’s not called that now!)


The basin is still used by leisure craft, of which there is a huge variety.  As we walked up to the basin, we passed a long line of boats laid up for the winter, either moored or on the hard standing – a yacht had just been craned out alongside what looked like small fishing boats.  Most of these have their summer moorings on the estuary at Topsham or Lympstone, and come onto the canal for the winter.  Still in the water were larger boats like these - the one in front had an MOD plate and may have been a troop carrier. 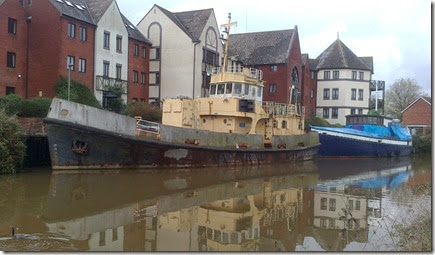 We walked down as far as the main road and bascule bridge at Countess Wear, two miles from the basin.  The village here (now swallowed up by Exeter) was named after Isabella and her weir. 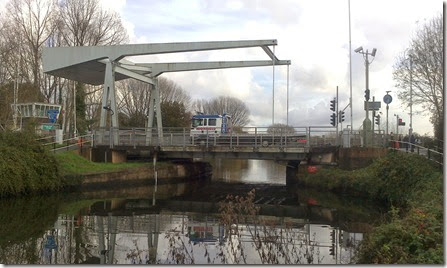 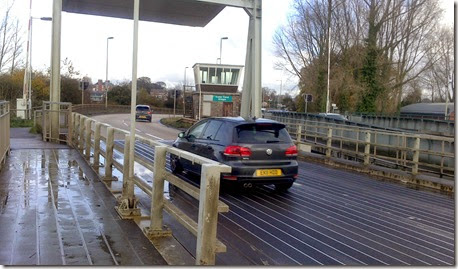 The control tower is not manned full-time so any boat wishing to pass  - indeed, any boat wishing to enter the canal – must book with the Exeter Harbour Office and pay the fee.  The road is very busy so it’s probably just as well the canal is not heavily used – just summer boat trips and at either end of the summer when boats pass through on their way to and from the basin.
We stopped for lunch at Double Locks, the pub by the lock.  It’s a lovely setting and very popular in the summer.  Road access is not easy – through the Industrial estate, over the swing bridge and down a single-track road, watching out for the cyclists who share it (luckily you can walk the towpath on the other side of the canal to avoid them).  In spite of that it’s always busy in summer as it’s a pleasant walk from Exeter through the playing fields. Dave and Meg were quite keen to get there  ….. 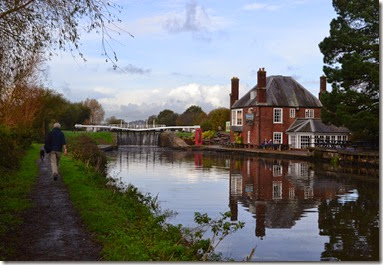 How dog-friendly is this?  Clean towels hanging on the wisteria! 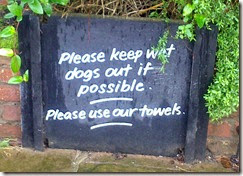 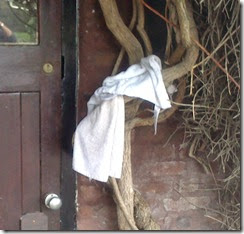 Meg could have stretched out by the fire but it was far too warm inside!  So we sat outside happily listening to the rush of water over the lock gates.  This is as close as we got to any narrowboats though. 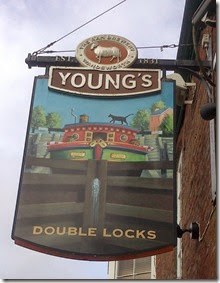 A large part of Hopwas Woods - the size of 44 football pitches – has been under threat of destruction for the creation of a sand and gravel quarry.  (For those not familiar with the location, it’s on the Coventry canal near Tamworth and Fazeley Junction).