The weather breaks (a bit), but it’s still warm

Sunday 22nd September; Radford Semele to Hatton locks
There was rain overnight and while we had breakfast.  But although it was overcast when we left, the rain held off as we cruised through Leamington.  There were lots of runners on the towpath but few boats on the move.

There is more artwork on the bridge by the student flats. 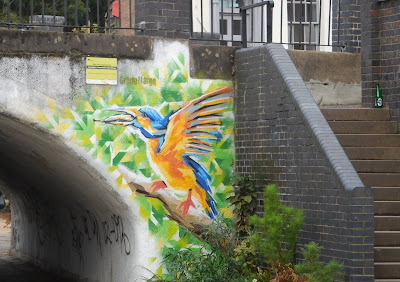 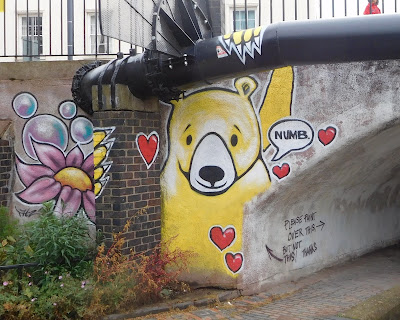 Further on, we have always admired the lovely cloud-shapes of the shrubs in front of a block of flats.  But not now! The shrubs still have a smooth rounded outline, but vandal contractors have shaved off all the berries where there should be a ripening banquet for the birds.

We crossed the river Leam and passed into Warwick.

Most of the Kate boats are out – we have seen most of them in the last couple of days!  We were surprised to find the Tesco moorings vacant so moored quickly and popped over for a quick shop.

The clouds had darkened while we were inside and were distinctly threatening as we returned to the boat. The first drops fell as we waited for two boats to ascend Cape bottom lock, but stayed light while we waited for another boat to join us for the two locks.  We just managed to moor and close up before it poured down.

But by 2 it had cleared again.  We decided to stick to our original plan and moor above the first four locks of the Hatton flight.  What joy! Two boats had clearly just come down.  And even better, as we rounded the bend by the Saltisford Arm, a boat pulled out in front of us.  With two crew and four empty locks we fairly sped up, and both of us moored on the long pound below lock 30.  The weather stayed dry and it was still very warm.

During the afternoon, Dave replaced the Whale water filter under the sink and took Meg up the flight to play ball where the towpath widens out further up.  I took the opportunity of the pan cupboard being empty to clean the shelves and tidy the cupboard, before cooking up yesterday’s blackberries with some apples from our tree at home.