On Monday we spent more time with family in Bucks and Berks and returned to Calcutt in the early evening.  After the very poor meal we had in the motorway services last Friday we treated ourselves to something from M&S as we were rather too tired to cook from scratch.

We were up bright and early on Tuesday morning, as Tim Garland from Milton Keynes was due to measure up for a new cratch cover.  The existing one, having had running repairs for the last few years, was finally giving up and we could delay the evil moment no longer.  Tim spent a long time carefully creating the pattern from which he will make the new cover. 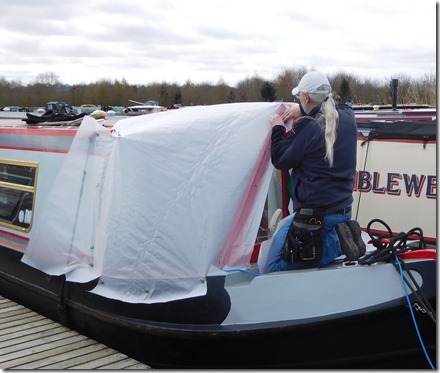 The pattern fabric was carefully pinned to the cratch board and cratch front, and magnetic fittings were used over the steelwork so the fabric was nice and taut.  A marker pen was used to indicate positions of seams, retaining straps, etc. 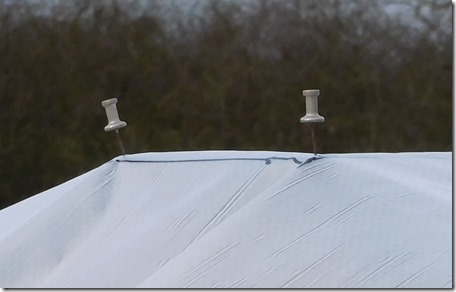 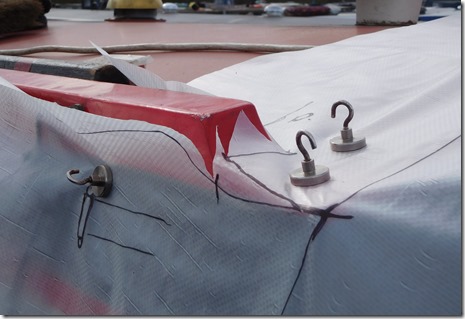 Tim explained that he never uses an existing cover as a pattern as the fabric may have shrunk; ours certainly has as the studs on the lower front of the cover no longer reach the gunwales.  The weather was luckily dry with only a light breeze.  Wind obviously makes fitting the pattern very difficult and his marker pen needs a dry surface or it won’t mark.

After he had gone we finished packing up and went home.  We have mostly restocked the galley cupboards but some spring cleaning will be in order on our next trip, and the outside will need washing and waxing.  We still have not made firm plans for this year’s cruising but are anticipating going south rather than north.

Trip stats;  we spent 6 nights on board but only cruised for 2 days, covering 1½ miles and passing through 6 broad locks.  But by car our total mileage was nearer 800.

We have had a week of mixed emotions.  After the joy of meeting our new grandson on Wednesday, we spent Friday in Berkshire on the sad occasion of the funeral of a close family member, Dave's brother-in-law.  We returned late to the marina, well after dark, to discover at the gate that we didn’t have the security code to open it.  No-one was about – the drive to the mooring areas is very long, and anyway most of the boats are unoccupied at this time of year – but I managed to squeeze through a tiny gap and went back to Chuffed – nearly 700 yards! - to find the code.  But it wasn’t on the boat either.  So I had to find an occupied boat and get the code from the rather surprised occupants before Dave could bring the car in.

On Saturday morning we got on with a few jobs, and considered how to spend the weekend.  The water to the pontoons had just been switched back on after the winter, so we could fill the water tank which was getting very low.  After an early lunch we made our way up the first two Calcutt locks and refuelled at the wharf before continuing up the top lock and on to Napton junction, where we turned left.  There were a fair number of boats on the move – must be springtime!

We didn’t go far, just to bridge 107 where we winded (turned) and came back to a stretch of piling where we moored.  We were sitting having a cup of tea when the ‘shed’ boat we had seen on Thursday came past. 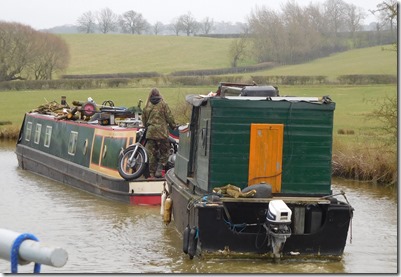 Apart from needing a change of scenery, we wanted to go out to try and get a decent internet signal.  Although Calcutt has Wi-Fi, we can’t access it on our pontoon and even outside the boat the phone signal is weak.  I managed to get a signal while we refuelled, so I could confirm the arrangements for Tuesday, when Tim Garland is coming to measure up to make us a new cratch cover.  But the signal was too weak to do much else. 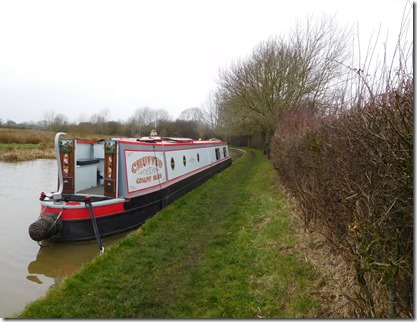 It’s grey and chilly but at least we’re out of the marina.

The signal where we moored was barely enough to get the weather forecast for tomorrow, and nowhere near enough for posting or catching up with blogs. No TV signal either, so we’ll have to give the England - Scotland rugby match a miss too.  But we were pleased to be out of the marina and away from the Canada geese which live on the marina and continue to call right through the night at this time of year.

On Sunday the rain which had started yesterday evening was still falling.  So we spent a relaxing morning reading and nearly finishing the Guardian crossword, which is quite an achievement for us.  There was a fair bit of traffic this morning in spite of the rain, which was not really surprising considering this is a busy stretch of canal.  At least the view was pleasant …. 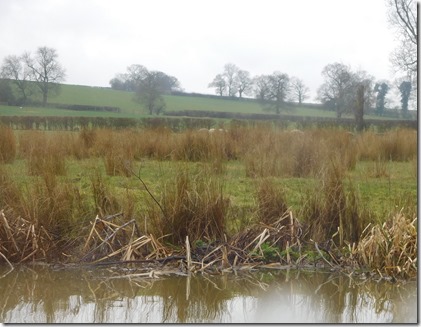 unlike the constant reminder greeting our eyes in the marina! 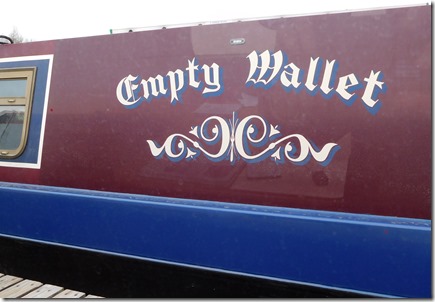 When we emerged into the brightening morning to start our return journey, I noticed some unusual rubbish floating around by the bow.  On our last trip we had passed a boat moored near Napton Narrowboats with several books floating in the water around it.  We couldn’t imagine what might have happened.  Perhaps someone was having a clear-out and thought they would sink out of sight. 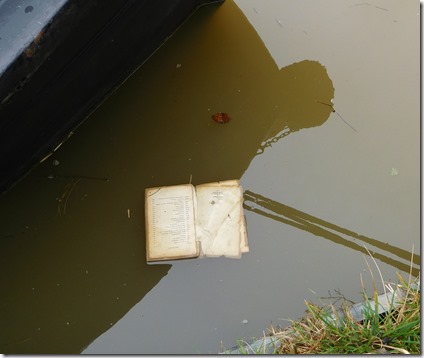 ‘Little Women’ by Louisa May Alcott must have gently floated about a mile in the last four weeks.  I haven’t read it since I was a teenager but I don’t think I’ll bother to keep this copy, even though it’s got pictures! 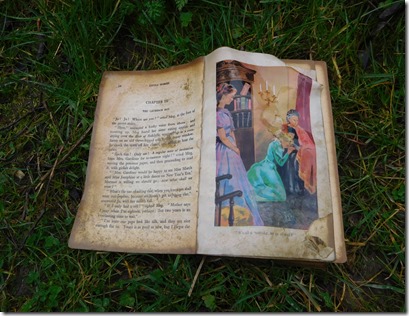 Into the rubbish bag it went.  Then we pulled in just past the next bridge, where we had passed some rubbish dumped in the hedge on our walk on Thursday – a trolley without wheels and a bag of kitchen rubbish.  Rather too much to carry for another few miles walking in the mud, so we left it where it was.  Obviously it hadn’t been collected in the meantime so …. 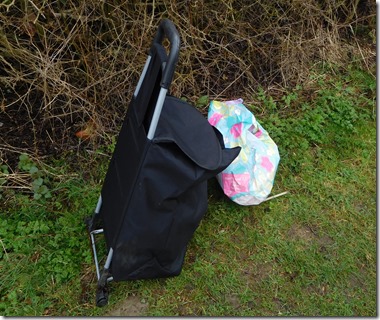 it joined ‘Little Women’ in the well deck.  We pulled in above the locks for lunch and succeeded in getting a TV signal so Dave could watch the Cup match between Tottenham Hotspur and Milwall.  I took the rubbish over the top lock and to the skip in the marina, and Meg, wearing her special Spurs collar, did her duty as the Lucky Dog. 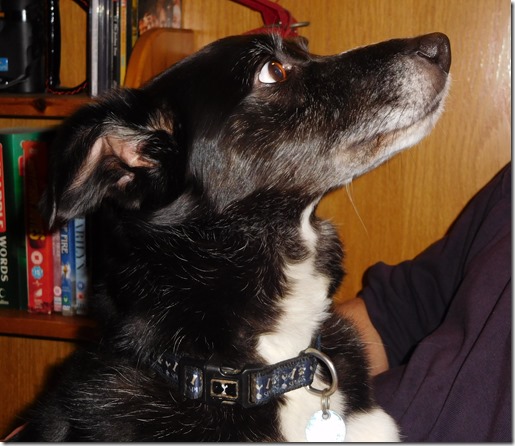 At half-time, with the score at Spurs 3, Milwall 0 we went off for a run.  When we got back both teams had doubled their score (6-0 in case you’re not mathematically inclined) and Dave was very happy!

TV aerial stowed, we shared the locks with a couple of new owners on their maiden trip. After spending just one week on a hire boat last year they were smitten with the canals and had collected their new boat the day before from Whilton marina, only a few miles away.  So they were still very much finding their feet with locks and very pleased to have company.  Then for us it was straight into the marina and our berth.

Are we chuffed? Oh yes.

Because today (Wednesday 8th) we met our beautiful grandson for the first time.  He is 2 days old. 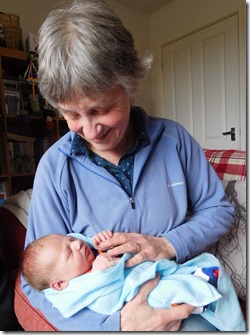 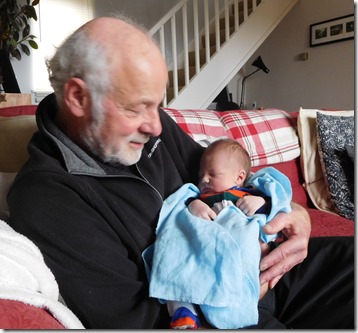 The besotted grandparents with little Finn.

We have a complicated few days ahead of us with family matters and Calcutt is much closer to it all than Devon, so we will be on the boat for nearly a week and may even have time for a short cruise.

After a detour to visit our daughter and her family – how lovely to be able to say that! – on the way up on Wednesday, we stayed in the marina on Thursday.  I took the folding bike and trundled off to Napton shop.  I say trundled, because although a lot of the way is level there was quite a strong side-wind.  By the time I reached the uphill bit from the King’s Head – up which I had to walk - I was really quite warm.  The flowers are coming out in the gardens and it is beginning to feel like spring at last.  A small tortoiseshell butterfly was feeding on these flowers but wouldn’t stay still long enough for a photo. 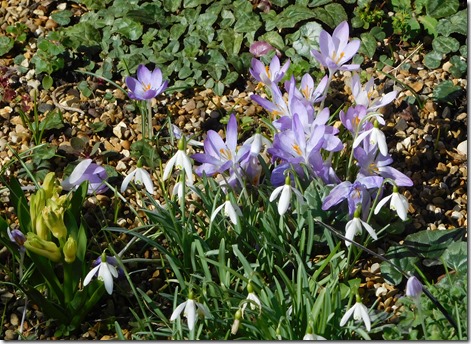 After lunch we took Meg for a good walk, starting  at Napton reservoir, glittering in the sunshine 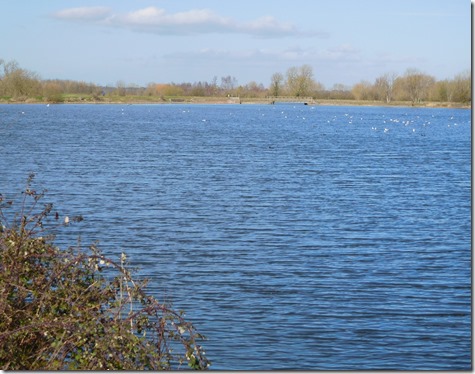 and across the fields to join the towpath at bridge 109 on the South Oxford canal.  The fields were very wet and boggy especially around the gates; the towpath was much better.  We walked over the bridge at Napton Junction and on to Nimrod bridge 108 on the Grand Union.  It was glorious in the sunshine and there were violets along the towpath. 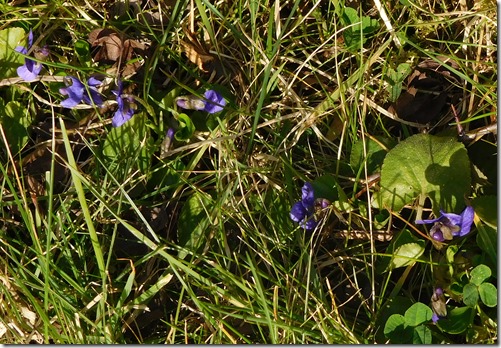 There was an interesting boat moored along this stretch; it had an outboard motor and looked like the sort of ‘shed’ boat you sometimes see with a liveaboard boat; and it had this on the roof where people put stone ornaments or a pot of plants. 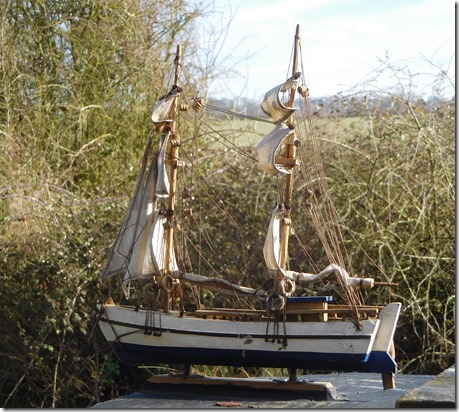 We walked up the road for a short way and then across a field of oilseed rape.  The path is clearly not heavily used and the crop had been sown across it, so we picked our way carefully between plants.  The mud here is very sticky and we had to scrape it off our boots at the gate.  Judging by the mucky lower rail of the fence we weren’t the first to do it!  As we walked past the woods near Calcutt farm we spotted an old tree house, now roofless and looking rather sad.  The lower rungs look to have been removed to prevent access. 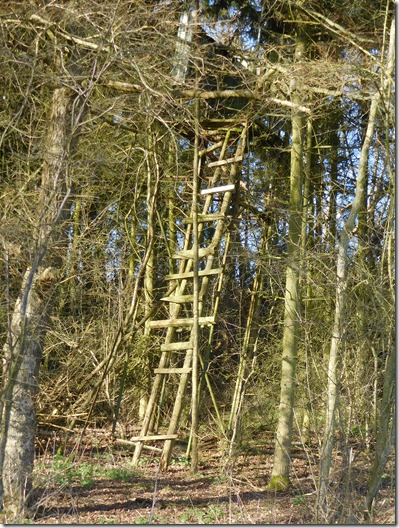 The paths crossed more wet and muddy fields past the back of Ventnor marina, till we rejoined the towpath at bridge 18 on the Grand Union, Tomlow bridge.  We crossed back into the marina at Calcutt top lock, and it was so warm that Dave felt obliged to have the first ice cream of the season.

It took a good 20 minutes to get the mud off the dog and our boots.  The evening quickly got cold so the fire was lit and we were sorted.