Glorious sun to start the journey back to Droitwich Spa

Friday 20th September; Calcutt Marina to Long Itchington
After an easy run up from Devon we were unloading the car by lunchtime, and ready to leave before 3 – even allowing for a pleasant chat with some neighbours, whose boat has been gutted and is having a new fit-out.

We turned left towards Warwick for the first time this year.  The weather has been glorious for a while and today’s was wonderful.  I think Saturday will be the end of the summer though.

Our initial plan had been to moor near the Willow Wren base before going down the ten Stockton locks in the morning.  But we didn’t want to waste the beautiful afternoon sitting around when we’ve been away from the cut, so on we went.  There are quite a few old working boats moored along this stretch. 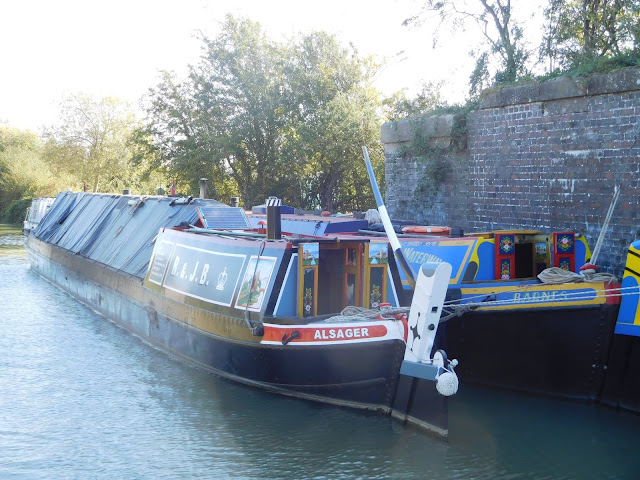 The steam tug Adamant was moored there too but in deep shade and I didn’t get a photo.  One boat had such a high polish on the sides that our reflection kept pace with us as we passed. 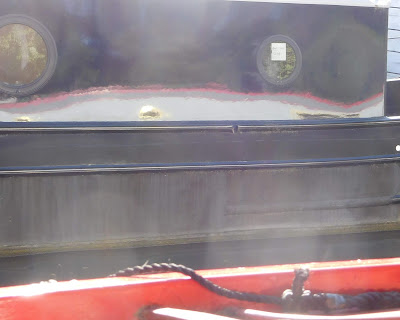 We were delighted to see a boat waiting for us in the top lock, clearly new hirers under instruction.  But unluckily for us they were being taught to use the lock before turning below it and going back up towards Braunston!  Makes sense though, as it’s only a three-day ‘taster’ hire.  So we did the rest of the flight on our own.  We met one boat coming up, but the bottom gates on these locks leak so much that we ended up having to fill, at least partially, all but two.

We weren’t in a hurry, and only used the paddles on the towpath side.  The paddles were stiff and the gates heavy, and even with Dave sharig the work I was pretty tired by the bottom lock.  Even so, having left the marina at 2.45, we were delighted to be mooring up between the bridges below the Two Boats by 5.30.  After a well-earned cup of tea (did I mention the chocolate cookies for essential locking fuel?) we repaired to the pub for beer and fish and chips.  As we returned, the sky was that beautiful translucent orangey colour you get at sunset in a clear sky..  My camera is only a point-and-shoot so can’t give anything like the real colour.  You can just see Meg standing at the stern. 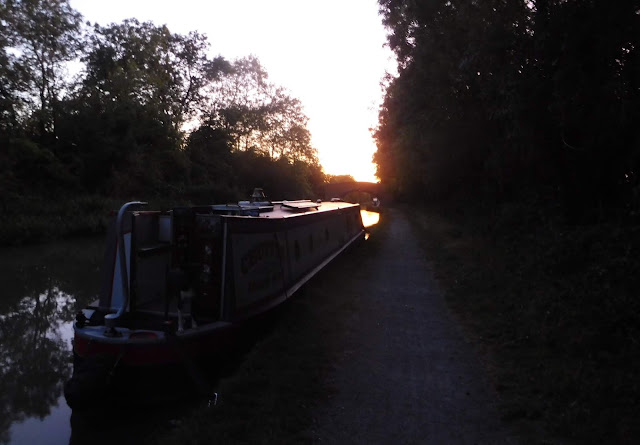 We are still having battery issues, so as well as no-signal areas (like our Long Itchington mooring tonight) affecting posting, I may not have a charged-up computer!
3 miles, 10 locks