A wet end to this trip – flaming June!

We have been waking early with the daylight and today was no exception.  Dave was straight out of bed and away well before 7 to the railway station to go and fetch the car from Calcutt.  As Meg and I returned from her early walk in the park two hot-air balloons rose into the sunny skies from somewhere to the west. 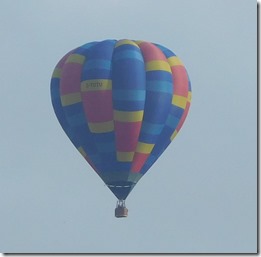 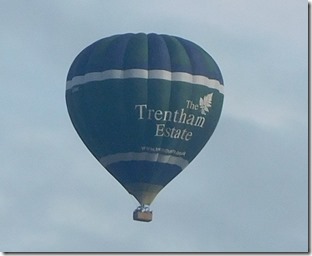 The second one is advertising the Trentham estate which you can walk to from the Trent and Mersey near Stoke on Trent.

During the morning I did a bit of shopping before I started cleaning the boat.  I took a couple of snaps on my phone as I walked through the park.  The mosaic depicts the history of salt extraction …

and the statue of St Richard presides serenely over the park. 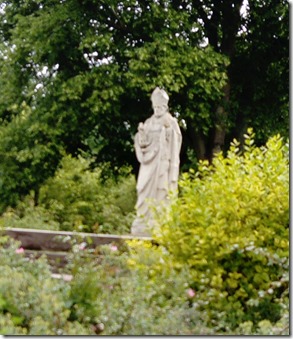 Remarkably Dave was back before lunchtime having driven down from Calcutt.  Unfortunately the bus service to Napton is very poor outside commuter times and he had to get a taxi from Leamington.  But did you know you can negotiate your taxi fare when they are not busy?

He left the car at the marina and walked to the boat, just avoiding the rain which started as he got back.  We had some lunch then got ourselves togged up with full wet-weather gear and set off through the park. 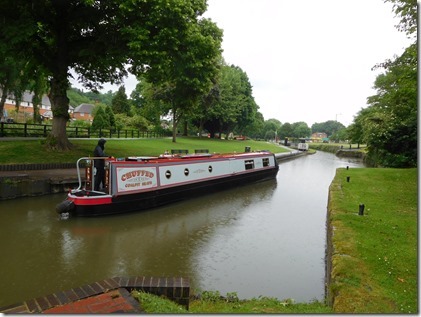 After the second swing bridge I was hot enough to remove my jumper.  My jacket sleeves felt unpleasantly clammy against my bare arms but the rain was too heavy to be without it. 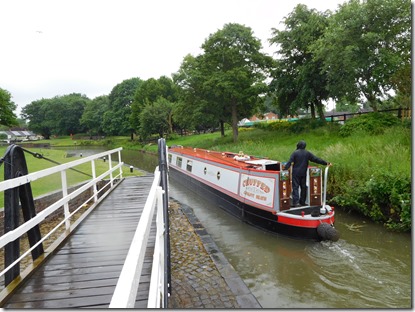 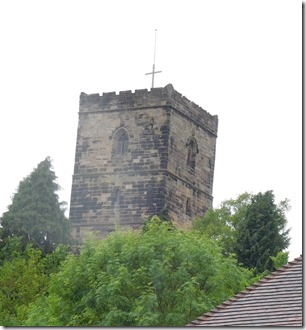 By the time we had reached the staircase locks the rain was easing somewhat and I could appreciate the wild-flower planting between the canal and the motorway. 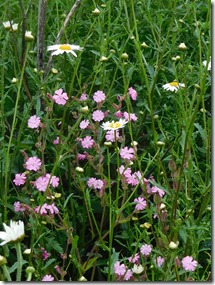 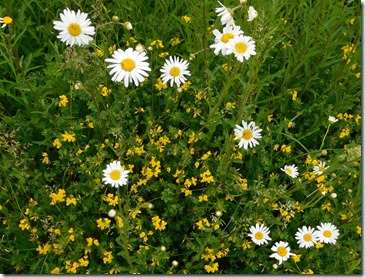 Red Campion, ox-eye daisies and a yellow vetch of some kind, but it’s too wet for butterflies to be out; 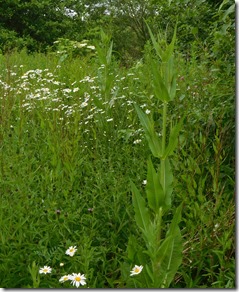 and teasels, not yet in flower, will be good for insects and finches later in the year.

Dave reversed neatly into our berth and we packed up the car between the intermittent showers.  We had to keep a strict eye on Meg;  the local swan family has very young cygnets and they were all on the grass nearby. 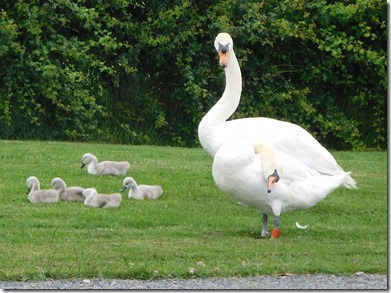 I was pleased with the success of my little tub of salad plants; loose-leaf lettuce, coriander, salad onions and some nasturtiums too though they were not yet in flower.  Tasty leaves though. 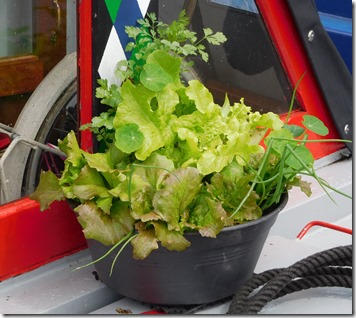 But I don’t think I’ll be in the running for an award in the CRT ‘Boats in Bloom’ competition this year!

We had a few delays on our journey home down the M5, but they were trivial compared with the heavy traffic and lengthy queues for the poor souls going home to the Midlands at the end of half-term.

We cruised gently down to Hanbury Junction in the cool of the grey morning, and moored above the Hanbury locks on the Droitwich canal.  Before we went on to Droitwich itself Dave wanted to call in at the marina to confirm our mooring for tomorrow.  There is only a short stretch of Armco piling here, where Dave secured the stern; no rings, and the ground is too hard for a mooring pin; but there are small holes in the other kind of piling so I used the odd-shaped mooring hook for the first time.  I have absolutely no idea what its proper name is or whether I have used it correctly! 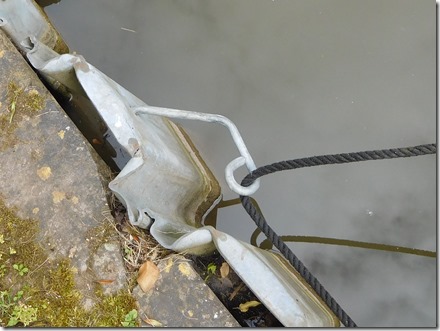 There was a bit of rope someone had looped through a hole further back so I ran my line back through that too in case a boat came by and pulled the hook out.  But no-one would have been able to come up the lock; Dave was soon back to get a windlass with the news that the top pound was completely empty. 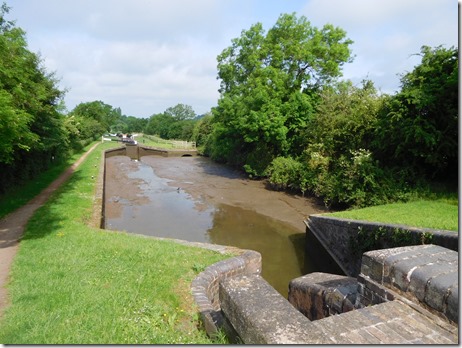 He started the top lock filling before going on down to the marina.  Meanwhile I got the dog, closed up the boat and went to start running water through.  The second lock was as empty as it could possibly have been without using a pump and the top gate had swung open with no water pressure to hold it closed.  And yet every paddle was firmly closed. 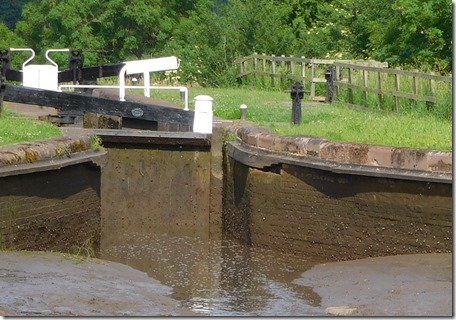 I thought I’d better call CRT to let them know but while I was on hold the first volunteer turned up and took over.  He confirmed there had not been any paddles left open and there were no leaks that would have caused the pound to drain.  He said that every now and then someone with a windlass is coming along overnight and draining the pound deliberately before closing the paddles again.  They are pretty sure they know who the culprit is, but as yet have no proof.

By the time Dave returned it was all back to normal and we were ready to leave.  Hanbury locks is one of the few flights where the side ponds are still in use. 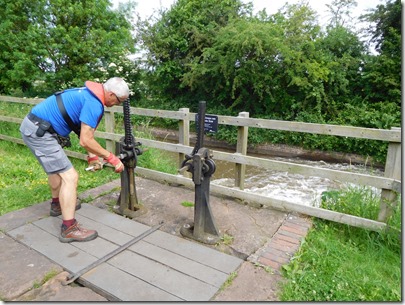 One of the volunteers fills the side pond.

You enter the lock and then empty the water into the side pond until it is full, before closing the side pond paddles and continuing with the bottom gate paddles as normal.  This saves half a lock-full of water, which is then used to half-fill the lock when the next boat comes up.  There are side ponds on the Grand Union, such as the ones on the Stoke Bruerne flight, but they fell out of use may years ago.  The bottom gates on Hanbury top lock will not stay open on their own, so a piece of wood is kept on the balance beam on each side to use as a prop. 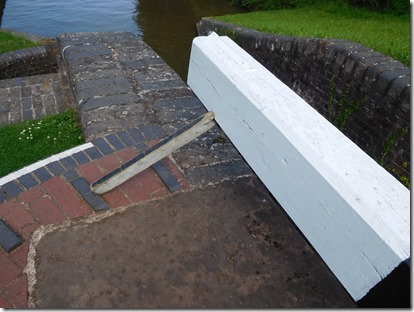 With the help of the lovely volunteers we were down very quickly.  Here is Chuffed on the way to the bottom lock. 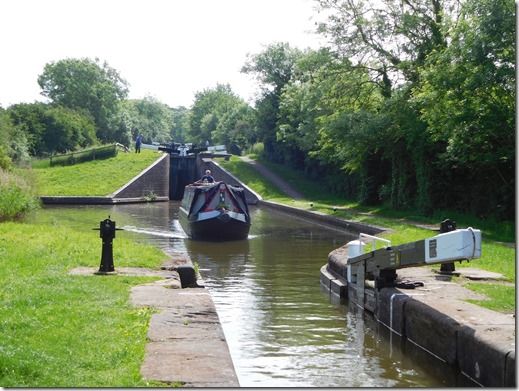 We had to wait for two boats coming up the staircase and while I helped them up I found this evidence of why you should never try to use your boat pole as a lever.  I just hope the other end didn’t injure anyone when it snapped. 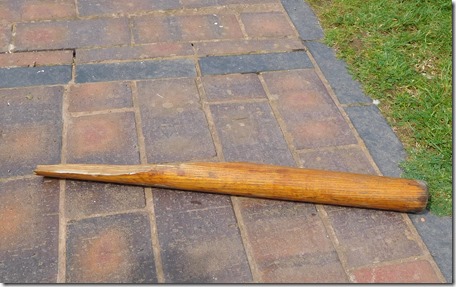 It’ll make a nice bit of firewood though.  We dropped down the staircase without incident.  This is the lock where there was a fatal accident last year.  A paddle has been chained up to reduce the rate of flow when the bottom lock is emptied.  We are always careful here as the locks are very deep; even more so now. 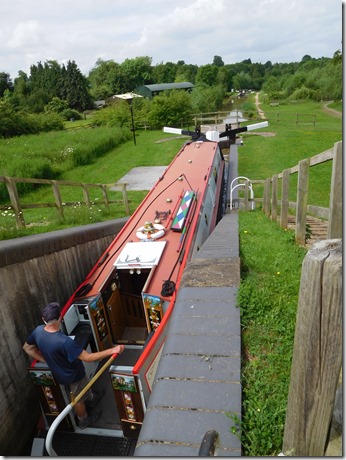 Rather different from the tunnel under the M5 where headroom is very low, even today when the river Salwarpe, which flows in the canal bed for part of its course, is also low. 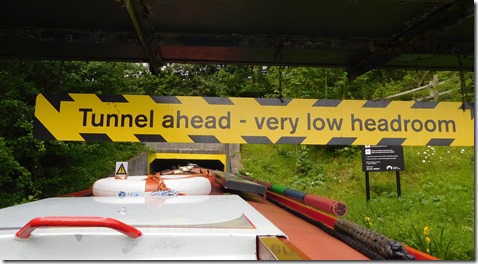 We had to put the painted can on the deck and it wasn’t really safe to look over the roof during the transit.  We had forgotten to lower the DAB radio aerial which ping-ping-pinged against the tunnel roof all the way through.

The river, here where it joins the canal below lock 7, was so low that the water didn’t even reach the green band on the depth indicator. 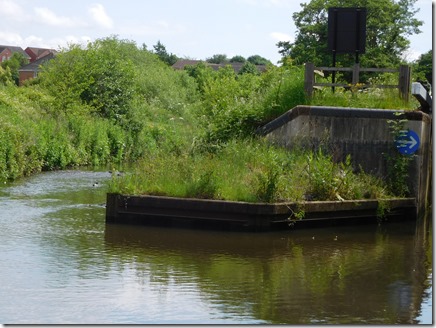 And the Barge lock, which normally has a drop of a few inches, had no drop at all.  But you still have to open the swing bridge across it before you can go through.  There are two more swing bridges in Vines Park before you reach Netherwich Basin, where only one other boat was on the visitor pontoons when we arrived.  After some lunch and a bit of shopping we took Meg and went off for a walk.  It took nearly ten minutes to get her off the boat and onto the pontoon; she could see the water under it and refused to move.  The last time we were here we still had old Tess who coped fine.  Once Meg was off the boat she quickly overcame her fear and was fine when we got back.  Two hireboats and a share had arrived in the meantime but there was plenty of room for everyone.

Droitwich was renowned for its brine springs, which were first exploited by the Romans.  The suffix ‘wich’ (as in Northwich and Middlewich further north) indicates a town where salt was extracted.  Here is one of the springs, rather prosaically at the bottom of someone’s garden, debouching into the Salwarpe. 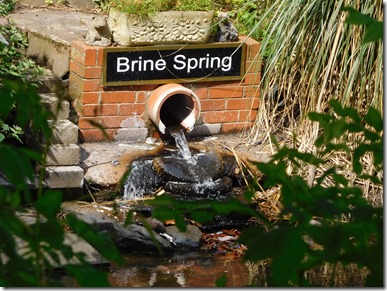 As the concentration of the brine is ten times that of seawater, it must make for interesting conditions in the river downstream.  I would guess there is different life in the water where the salinity is higher.  I wonder how far downstream the effect lasts?

Following Jennie’s recommendation (NB Tentatrice) we followed the footpath beside the Gardener’s Arms which leads up to St Augustine’s church.  The churchyard is large and the more modern graves especially are well-tended.  There were glimpses of the view but with the trees and hedges in full leaf it was largely obscured.

We had a lovely meal in the Gardener’s Arms that evening.  It was warm enough to be comfortable outside in one of their curtained marquees which had the side rolled up.  It reminded me of Jane’s Enchanted Tea Garden on the South Oxford.  Very pleasant indeed. 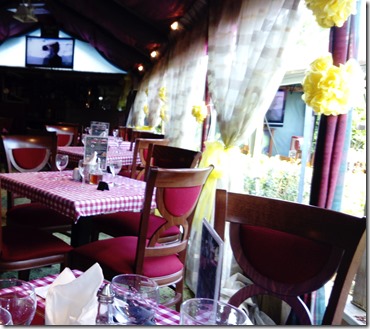 It has the comfiest pub chairs I have ever sat in.