Did anyone see this programme last night on More 4?  They went from Bath to Devizes in one of the new black Anglo-Welsh fleet.  There is a lovely review of it here (I particularly enjoyed the swipe at Top Gear):

Very poignant because Pru has a form of Alzheimer's.  There are 3 more episodes on other canals.

If Pru (at 81) can do all the lock work up the Caen Hill flight then I’m sure I can!

The dog had a great time on her first trip!

And so did we, though now I’m looking at the rain beat down on our soggy garden while a pile of muddy washing waits to be done. Even though we arrived last Friday in the rain, we had a couple of brilliant sunny days and only one wet one, which doesn’t really count because we were tied up before it got really bad.

We spent Tuesday doing various jobs.  The marina has good facilities so I washed the muddy dog towels which dried quickly in the stiff breeze.  Provided the back was closed up to keep the wind out we could have the side hatch open and enjoy the sun.  In the evening we drove to the Three Magpies at Sells Green, where Caen Hill moorers get 10% off meals! very nice.

On Wednesday the engineer from Foxhangers came to service the engine, and we packed up to come home. 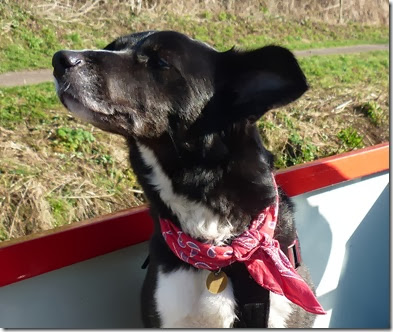 Meg seems to have taken to boat life with enthusiasm, especially the walks.  She loves to watch the world go by from her perch on the locker and the first passing boat she saw had a good laugh at her wide-eyed astonishment as they went by. She has had her first lessons in leaving swans and geese alone though she thinks ducks are another matter – bit of work needed there I think.  She is also learning to stay put until told she can get off the boat, though we are not taking any risks with locks or manouevres like winding or pontoon mooring yet, when she stays shut inside.  We had forgotten the extra cleaning involved when you’ve got a dog on board but we think we’ll put up with that ….

A dismal day but we moored opposite the pub ….

Not terribly cold but grey skies, light showers and ferocious winds. At least the heavy rain held off till later!

We set off making for the winding hole between Hilperton and Bradford to turn and get back up the Seend locks before they close on Tuesday.  We stopped briefly at Hilperton to get the paper, watching another boat expertly reversing a couple of hundred yards back down to fuel up – all going well till he got to the bridge and a sudden gust pushed him into the bridge and then the moored boats the other side.  We were lucky that the winding hole was very sheltered.  We had planned an early lunch stop on the 24-hour moorings below Semington locks, but as yesterday they were chock full of what looked like empty boats.  So as the wind was strengthening all the time, we decided to crack on and have a late lunch when we got to the Barge at Seend.

It was difficult getting into the top Semington lock with the wind, but at least Dave was in the middle of the cut and didn’t have to get the boat off the lock moorings – a hire boat was approaching as we rose and made the mistake of pulling on to the lock moorings.  We were blown onto the wrong side of the ‘dual carriageway’ bit as they struggled to get into the lock.

The first swing bridge was so heavy in the wind that I had to get Dave to come and help me shift it, then the wind made it really difficult for him to get the line of the bridge , so after he’d gone through I took the dog and we beetled up to swing the other two so he didn’t have to pull in again.  The middle bridge by the farm, Lowes, has been difficult for a while and now has a ‘CRT aware’ notice and a phone number to call if you can’t shift it.  They have piled concrete blocks at one end to improve the balance and I had no problem with it, apart from the wind. 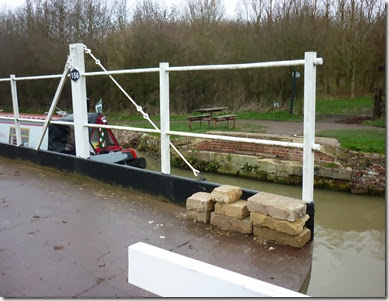 As we approached the bottom Seend lock we had to pull in as a boat was coming down.  The wind was so strong that it took two of us on the bank to get it off the lock mooring and into the lock, with both gates having to be open.  We were sheltered enough on the lock moorings below for Dave to have no trouble getting off, but they were blown straight into the boat on the moorings behind.  Unfortunately the next lock had started to refill and before I could empty it, Dave got blown onto the lock moorings.  I had to push the bow off with the pole for him to get into the shelter of the lock tail.  At least we had no problem getting moored opposite the Barge!

After a late lunch we lit the fire and relaxed for the rest of the afternoon, rocking in the wind and listening to the rain hammering down.  Then a quick dash to the Barge for an excellent meal.

It was another dismal damp start, but the sun soon came out and it was a lovely day, though still a bit breezy.  The towpath unfortunately was a sea of mud after last night’s rain and Meg, just dry after her morning walk, rushed out to meet another dog then straight back in treading mud throughout the boat.  Grrr.

Workmen had arrived at the middle lock, where the ground paddle culvert and its surround is being repaired from tomorrow.  There were two men in high-vis gear and an engineer, there to assess the job.  They said they would set the lock for us, and as we were untying, the engineer rushed off to his car and disappeared.  The poor man had been standing on the broken surround of the paddle gear looking down the hole and it had collapsed, throwing him into the water – luckily above the lock with the top paddle closed.

It was not as warm as Saturday but still spring-like with the blackthorn blossom out, coltsfoot and snowdrops in flower and birds singing. 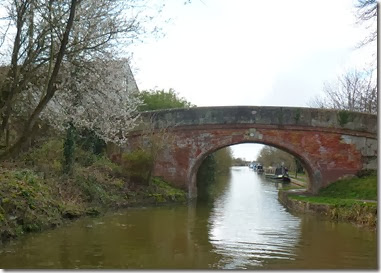 We moored easily at Sells Green.  Dave cleaned the mud off the towpath side of the boat and I seized the opportunity to clean out the cupboards under the sink with the sun streaming into them through the open side hatch – so much easier than using a head torch.  After lunch we went back into the marina, though as the wind had got up again it was a bit tricky getting cleanly round and under the bridge; 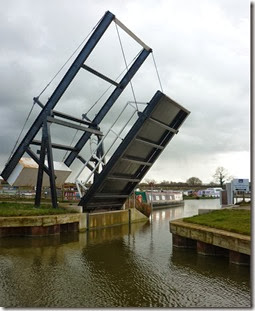 though nothing like as tricky as actually getting onto our pontoon.

I took Meg for a run up to the top of the Caen Hill flight, where the work at lock 41, repairing damaged coping stones (boat impact last season) was in progress. I forgot to take a picture though.

We are now waiting to hear whether Foxhangers can service our engine in the next couple of days.

On the last day of February we drove up to Caen Hill marina in miserable wet weather, and unloaded in the rain into a freezing cold boat.  We decided to stay put for the rest of the day!  Chuffed was damp with condensation and there were a couple of patches where the rain had forced itself through the mushroom vents – we had to dry the top of the cooker before we could light the gas for a cup of tea!  We soon warmed up with the Mikuni (for hot water too) and then the fire.

What did Meg think of it all?  To start with she hated the pontoons – she spread her legs wide and scuttled along like a little crab.  After a couple of times she was much more confident and thoroughly enjoyed a run along the towpath in the afternoon.  Once she knew where her bed and food bowl were she was fine and loved the fire of course.

On Saturday morning we were woken by sunshine and a little wet nose.  She skipped her way up the frosty pontoon for her morning walk then hopped up onto one of the lockers to take charge as we set off westwards. 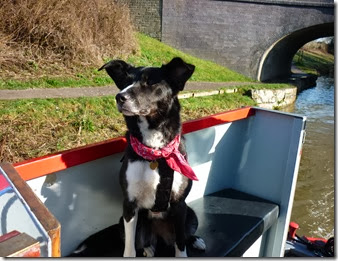 There were quite a few boats out today in the glorious weather.  We met the first, naturally, at the first bridge.  Meg found the first swing bridge puzzling, then was fine until she thought Dave was leaving without her!  We shut her in for the locks today until we are more sure of how she gets on with the water and the boat.

I had forgotten what hard work the Seend locks can be.  We moored at Seend Park swing bridge for a quick visit to the Tesco Express, had lunch and went on straight afterwards to enjoy the sunshine while it lasted.  We had hoped to moor on the 24-hour spot below the Semington locks, but it was pretty full so we went on and found a wild mooring near Wheddon Bridge.  After giving directions to Trowbridge to a young man who had walked from Melksham, courtesy of Nicholson's, Dave took Meg off for a walk and I got the fire lit.  An excellent day.