A bit of a queue

Friday 30th and Saturday 31st August; Fenny to Calcutt, and home
It was pretty windy last night, enough to wake us up now and then.  But the sun was shining at 7 am, and this bunny by the boat was enjoying it too. 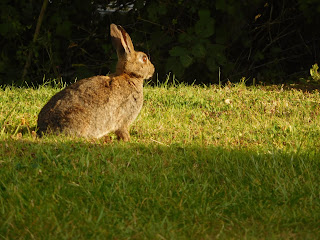 The noise from the building site on the main road started at 7.45, but we were waiting for the chandlery to open so we had to stay put, apart from pulling back to the fuel pump.  Several boats were on the move early, and as soon as we had fuelled up and disposed of rubbish we were on our way too. Fenny must have been jam-packed last night, as there were still plenty of boats on the moorings.  We didn’t stop for water, instead trickling off to potter our way across the summit pound.

It is noticeable how much easier it is to cruise in the morning – the result, we understand, of overnight pumping to raise the level.  Autumn colours are developing, with the native Guelder Rose (Viburnum opulus) leading the way with its glowing jewels. 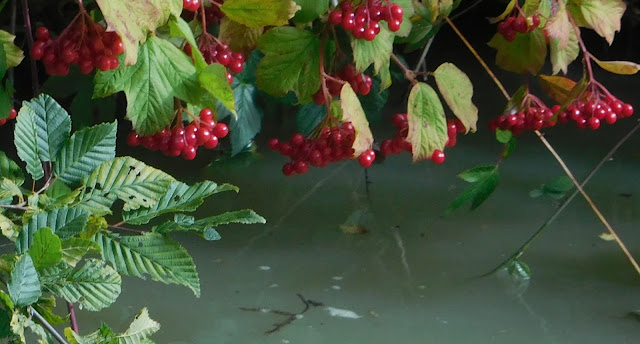 We met a few boats coming towards us, but not, this time, all at Griffin’s Bridge - the one that doubles back on itself and has terrible visibility!

As we passed the HS2 works, carrying on apace in spite of the review that is currently taking place, Dave wondered whether they would have to put all that earth back again..... 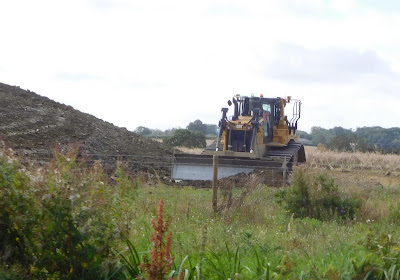 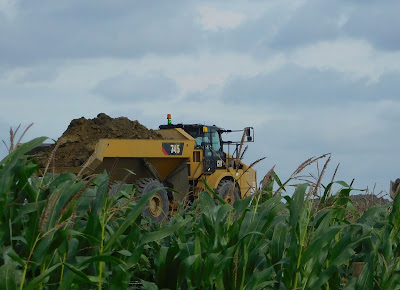 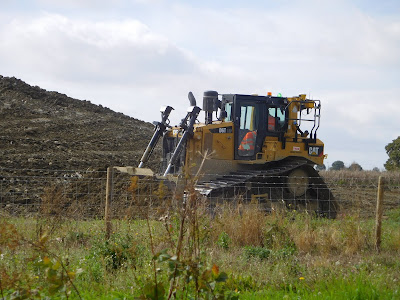 Then we were on the approach to the top of the Napton flight at Marston Doles.  Would there be a queue?  Oh yes.  We were at least 6th, way, way back from even the sight of the lock moorings!  The bend makes it a dodgy approach to the lock at the best of times, and the wind had been causing problems.  I had an interesting chat with the owners of NB Muleless, which was one of the first hybrid boats to be built.  Ange d’Eau, which we had passed and repassed on this trip, was on the water point.  As they had nearly run out, they were having a relaxed lunch while they filled.  Muleless were also waiting for water, and were so frustrated at the delay they had gone along to check that the tap was actually on!  It was - it must have been a very large tank and a slow tap.  Muleless let us take their place in the queue, just as Ange d’Eau were coiling their hose.

We went down the first two locks and stopped for a belated lunch. We also wanted to avoid the boat in front of us – we heard that the two on board hadn’t had the boat long, kept getting into fixes, and were rudely refusing all offers of help, including that of volunteers at locks.  I helped them down the top lock. There had been a bit of a delay, as the wind had pinned them to the offside.  I made a friendly comment about the tricky wind, as you do, and got glared at by the steerer for my pains.  I tried chatting to the crew and she just scowled.  I’ve only ever met one other person on the waterways as unpleasant as these two, and that was a long-ago hotel boat operator.

So we had our lunch, watching the boats going by, and eventually set off again down the flight.  Apart from the fact we were following a boat down and had to turn every lock, it was very straightforward.  The water buffalo are still monumentally uninterested in boats. 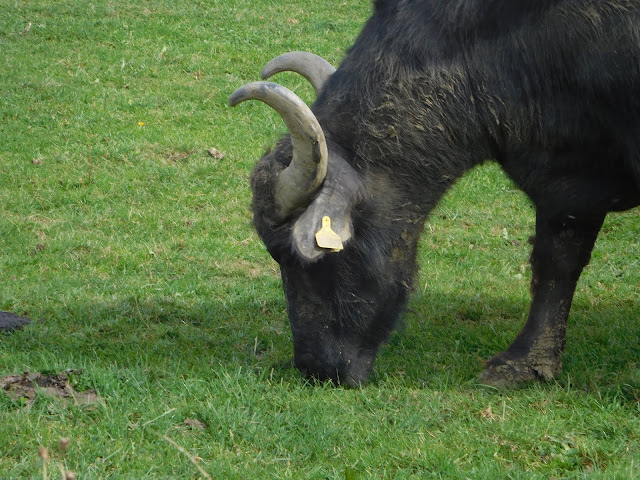 We emptied cassettes and filled the water tank at the bottom of the locks, and continued towards Calcutt.  Once more we came across this widebeam moored a couple of hundred yards before Napton Junction. 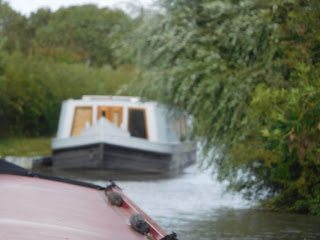 It is a work in progress and was locked up.  Last time we saw it here there was a boat coming towards us and we had a good old grumble about inconsiderate mooring – the bend and the offside vegetation meant neither of us could see the other coming. 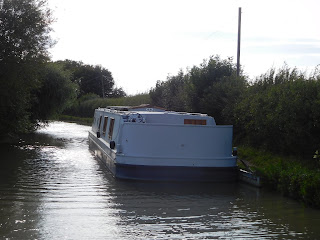 Ugly thing.  We thought he would probably have to reverse to the junction to wind, as it would be very tight further towards Napton.

We crossed three Kate hire boats, freshly out of Stockton Top, as we dropped down Calcutt locks.  The troublesome wind didn’t prevent us getting into the visitor moorings.

We started packing the car in the evening, ready for a speedy getaway on Saturday morning.  We just had to hand the keys in at the office – already open, as it was changeover day – and were away before 9.  We had an easy journey back down to Devon as the schools go back next week, so the traffic wasn't too bad  – but we did feel sorry for the families stuck in miles of jams going north on the M5!