Well, I’m over a week behind with the blog, better get cracking now we’re back home ….
Sunday 29th June
We were away by 9 in sunshine, and made our way down to Waltham Abbey.  The Lee Navigation is beautiful below Dobb’s Weir Lock, and Carthagena Lock is kept pretty with hanging baskets. 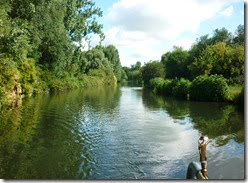 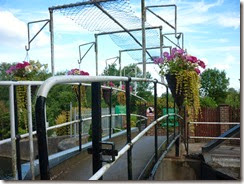 At Cheshunt lake a watersports centre has been set up, with sailing (not on the navigation thankfully) and canoeing.  For the landlubbers there is the ice-cream boat! 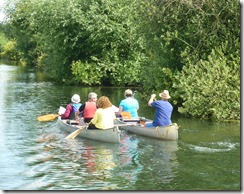 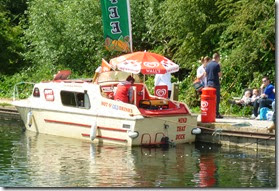 Daughter Liz was cycling up from Hackney to arrive in time for lunch, which was delightful and relaxed in the sunshine.  We walked over to the Lee Valley White Water Centre, which was home to some of the Olympic events, to watch individual kayakers (who knew what they were doing) and the White-water Raft Experience punters, who really didn’t!  Luckily each raft had an instructor to keep them the right way up, and it looked immense fun.  In the first picture you can only see the instructor and a few paddles. 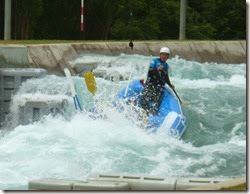 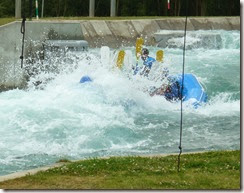 I borrowed Liz’s bike to buzz down to Waltham Abbey Church to have a look round and get some photos, while she and Dave took the boat down the lock.  As I went into the church the rain started and it tipped down.  I spent a happy time chatting to the volunteers about the Tour de France which is passing nearby in a few days’ time (actually today as I write) – sadly we won’t still be in the area – and admiring the beautiful stained glass.  By the time I went outside it was still raining but not so much I couldn’t take a picture of Harold II’s likely final resting place.  He rebuilt the church in gratitude for having been healed during a pilgrimage to Waltham. 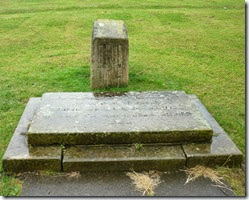 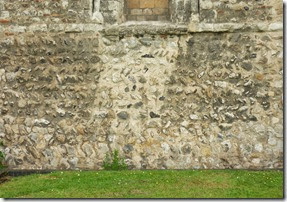 The church was rebuilt in the twelfth century, but the section of herringbone-patterned wall above is thought to be a survival from Harold’s time.  As an Abbey, the church was much larger than it is today.  It was partly demolished during the Dissolution of the Monasteries by Henry VIII and only the nave was spared for use as a parish church.  The first picture shows a column on the outside wall, which would once have been inside, and the site of a long-gone column.  The second shows the rough edges where the rest of the wall was demolished nearly 500 years ago. 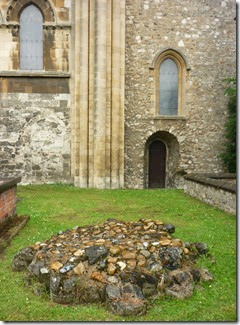 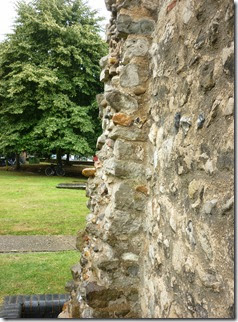 And finally some knapped flints, which are knocked or ‘knapped’ into shapes suitable for building from the large lumps of flint found in the chalk. 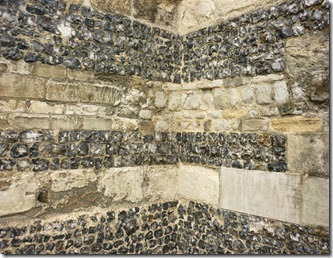 When I cycled back to the canal, I caught up with Chuffed leaving Town Lock.  Dave and Liz look pretty grim in the rain but at least they had waterproofs, unlike me!  I waited under the M25 bridge to be picked up.  Liz helped us down as far as Enfield Lock, where she had to leave.  It was still raining but she would get back home far quicker by bike than by boat! 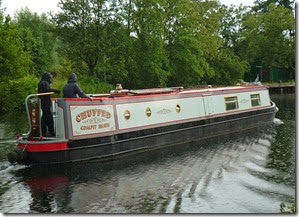 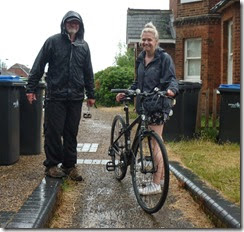 She was home and showered before we finished for the day.  She had got plastered in mud from the towpath (her back mudguard having broken a few days before).  We continued in the rain to Pickett’s Lock, where the inhabitant of the cottage keeps it looking attractive.  The water point (one of the unattractive grey metal ones, in the right of the photo) is lockside, but has an appropriate ‘tub’ next to it! 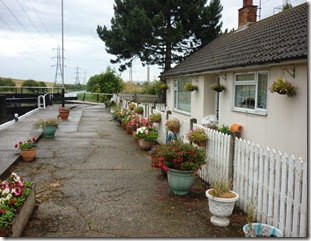 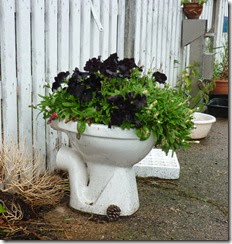 We finished up on the stretch above Stonebridge Lock, where there are good moorings and walks for the dog.  The sun finally came out and the rain stopped after 7 for a fine end to the day, which Dave captured on film. 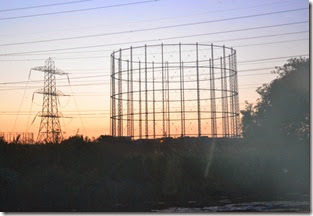 11 and a half miles, 10 locks (1 electric, 3 partly electric)
Monday 30th June – off the Lee Navigation
The sun was hot as we set off around 10.  An easy start work-wise, as Stonebridge and Tottenham locks are electric.  It’s clear that nobody uses the manual lock at Tottenham nowadays (there are no beams so you couldn’t open the gates anyway). 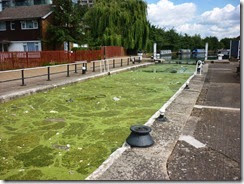 As we approached Lea Bridge the weed was getting bad again – if anything worse than before – and all three weed-cutters were out.  A local boater told us they are out every day.  The first big one was operated by a cheery woman; the weed is drawn up a conveyor and drops into the barge bit behind the cab.  The small one (below), driven by an even cheerier man, operates like an aquatic digger tractor, scooping up the weed from the surface and dumping it into a barge. 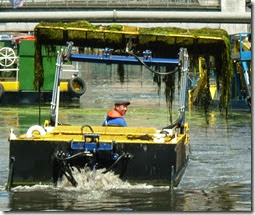 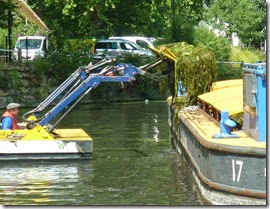 In spite of their efforts, we still had trouble, the only clear water being behind the boat! 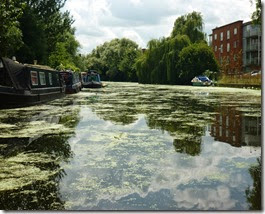 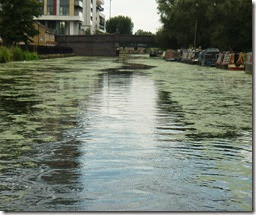 The moorings at the filter beds were full but there was plenty of space further on by Hackney Marshes so we could stop for lunch.  Dave spent some time hauling weed off the rudder with the hook, and we have a short pole which I used to dislodge the weed from the bow.  We took Meg onto the football fields where we had great fun with a football Dave fished out of the water – until she burst it. 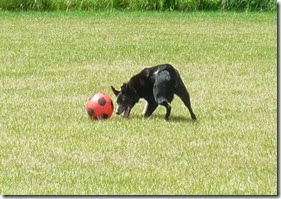 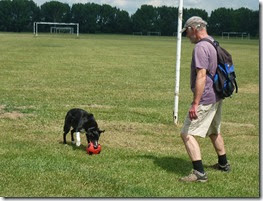 We ploughed on towards the Hertford Union, where the problem quickly lessened.  We were amused by this graffiti, where a second contributor has added their tuppeny-worth. 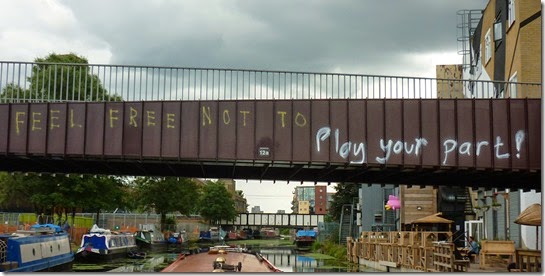 We locked up with a single-hander, and met boats coming down, so it was an easy transit apart from the bottom lock.  On the way down, we had seen a boater-written note on the paddle gear on one side warning that it wasn’t working – as I started to raise the other, a local liveaboard told me that side had failed too – the pawl (catch) is not staying put in the rack (upright bit) so you have to hold the paddle up with your windlass.  Luckily the bottom lock is not deep and he also stayed to help - thanks mate.  It’s been reported but there’s no sign of CRT involvement yet.
We moored at the first opportunity above the locks at Victoria Park, where Dave spent half an hour down the weed hatch – although we had reversed the engine and pushed weed off the bow several times, and the prop appeared to be OK, he thought he’d better check it and got a carrier-bag full of plastic, fishing line, old tea-towels and underpants.
Up went the TV aerial for the football before the rain started for yet another wet evening.
5 miles, 5 locks (2 electric)
Posted by nb Chuffed at 02:48