The Serpentine Gallery and Willowtree

We started off with some cleaning, taking the rug out onto the pontoon, which was an ideal place to shake and brush the dog hairs off on a flat clean(ish) surface.  Before we set off out of London, we decided to go to Kensington Gardens again for the morning to walk the dog and read the paper in the shade.  I left Dave and Meg under the trees and went into the Serpentine Gallery to see the Marina Abramovic … what, exactly?  It’s called 512 hours and billed as a ‘durational performance’.  It was free, but you have to queue as there is a limit on how many people the gallery can hold, and you can stay as long as you like.  The staff outside warned that by entering you agree to be filmed, you will be silent, and you are required to put your bag, camera, watch, sunglasses and phone in a locker before you go in (so no photos).

If you aren’t into weird artistic things, skip this paragraph!  There were three white rooms. The first contained a raised cruciform platform in the centre, with 4 rows of 3 chairs radiating from it.  People were standing on the platform, some with eyes closed, very still, though occasionally someone rolled their shoulders.  A lot of people stood round the edges, watching, or with eyes closed.  Occasionally an assistant – or even Ms Abramovic herself, though I didn’t know at the time what she looked like – would take someone by the hand and move them onto the platform, or to another room.   Not me, though.  Some of the people on the chairs were wearing headphones.  When one of the chairs became free, I sat down.  The headphones are noise-cancelling, and the already low-level noises of creaking shoes and distant traffic became muffled.  It was surprisingly easy to sit very still, close your eyes and relax.  After a while I moved (slowly and quietly, of course) to the second room, where people were walking, very slowly, up and down the room.  I joined them.  They were completely silent and absorbed in what they were doing.  No-one caught another’s eye, giggled, or laughed.  I tried walking with eyes closed – interesting – but after a while the urge to do a Monty Python ’silly walk’ became too strong to resist.  Only a small quiet version of the Michael Palin effort though, not the full-blown extravagance of John Cleese!  though it would have been interesting to see the reaction from others if I had  ...  The third room had two rows of low camp-beds, each one with an prone occupant, eyes closed, under a brightly coloured sheet.  One chap was starting to snore quietly, and still no-one giggled.  Before I left, I was invited to sit on one of the chairs.  As I’d had two goes, I declined, but got a nice little back rub and the hope that I’d enjoyed the experience.  Had I?  Well, yes. It was strange, calming and meditative.  If I lived locally I would probably go back again.  Mmmm.  I think I’ll go and sit in Pseud’s Corner for a little while.

Back to real life!  Dave declined the chance to go in – lucky really, as the queue was snaking out into the park and there was no guarantee the people at the back would get in at all.

On the way back to the boat we checked out the progress on the bridge at the end of the basin; 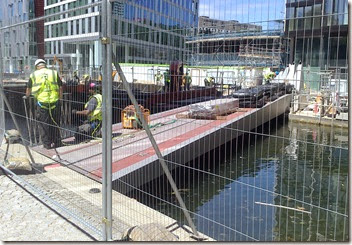 After lunch we got a bit delayed by chatting to Barry from the delightfully named ‘The Slowness of Cows’ moored a bit further down the basin.  He knows a lot about the ‘Idle Women’ who crewed the working boats during the war; http://canalrivertrust.org.uk/news-and-views/features/international-womens-day-the-women-of-the-canals/inspiration-of-the-idle-women and http://www.telegraph.co.uk/news/uknews/3135333/Reunion-and-plaque-for-the-Idle-Women-the-Land-Girls-of-the-canals.html. He has met Emma Smith, whose ‘Maidens’ Trip’ (still in print) is one of the memoirs written in subsequent years, and has named his boat after something in her book.

We stopped at the Alperton Sainsbury’s for some supplies, where I met a very well-spoken elderly lady who was buying herself some champagne.  She says the Sainsbury’s selection is as good as Fortnum’s, where she used to shop.  She had just moved from Sloane Street to the Alperton area – bit of a change!  and wanted some fizz as a little treat amidst the unpacking. Did you know if you have any left over you can put one of those wine-saver rubber cork things in the neck, and it keeps it bubbly till you open it next day?  I don’t think I’ve ever seen a champagne bottle that wasn’t speedily emptied though!

We got an excellent mooring at the Willowtree public open space.  So relaxing and quiet after the noisy office extractors at Paddington Basin! 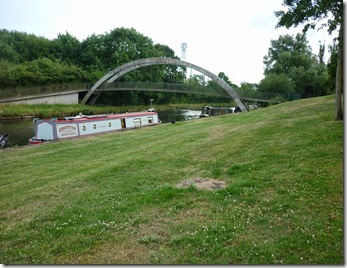 It’s very hot today but with a cooling breeze, and we decided to stay put.  Dave took out the hopper windows and gave all the glazing a really good clean, before starting to rub down and varnish the wooden frames inside which have condensation damage.  I spent the morning sitting on the grass with a cup of coffee …. mending yet more bits of the cratch cover where the original thread has rotted.  We may be looking at a new cover before the winter.

We walked up to find the Yeading Tesco in the afternoon, and Dave posted the failed water-pump back to Mack Engineering in the post office nearby.  The postmaster was extremely helpful in advising which service to use.  We went on to the marina, to check out the restaurant which has recently changed hands.  We had been warned that the drinks were expensive - the food was too, and the menu included things like beetroot foam which has always struck us as odd.  So we had a posh Tesco Finest meal instead and cheap drinks on board.

It got cold and started to rain as we finished our meal – but the poor souls behind us had just started a barbie.  Luckily we’ve got a large umbrella which came in handy for them.