Hard work in the sun

We left our excellent mooring at Cassiobury Park around 9 in blissful coolness.  The first of the Cassiobury Park locks has to be left empty, so that was ready for us.  I left Dave to finish and close up and went to turn the lock above, which had both top gates wide open.  On my way I passed a very dour walker with a windlass and an i-pad or similar who turned out to be CRT.  Both locks have one paddle chained up and he appeared to be making notes on their condition.  He was nothing like any BW/CRT employee or volunteer we have ever met – not only had he left the top gates open after he checked the top lock – he must have seen we were coming up – but he let Dave open the top gate, drive out, moor up, come back to close it and then walk right up to him at the bottom gates to open a paddle without even looking up!  He had a windlass so must have had his training, but trying to be charitable we thought it was perhaps his first day on his own and he was a bit shy?  He didn’t even look up till Dave said good morning!  Anyway, here is Dave leaving the bottom lock. 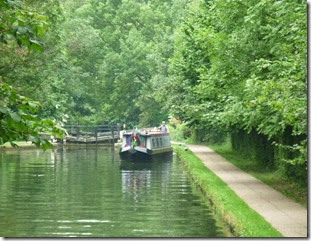 We joined the very pretty stretch where the canal follows the course of the River Gade. 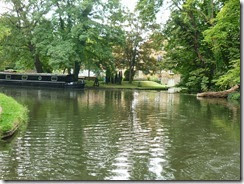 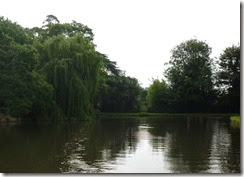 and passed under The Grove Bridge, which had to be made decorative to satisfy the Earl of Essex whose land the canal crossed. 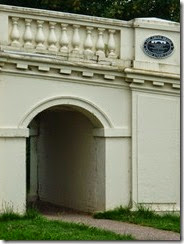 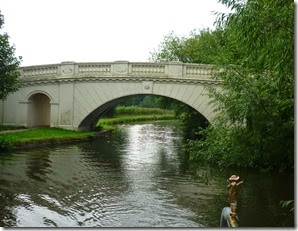 Below lock 71 we passed men working on the upgrading of the towpath between Watford and Hemel Hempstead. 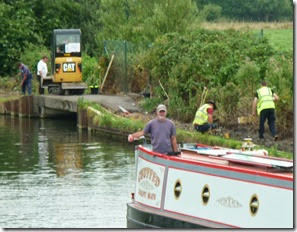 At the lock itself is a pretty cottage whose ground floor rear wall is part of the construction of the towpath edge.  The owner was weeding the flower bed adjoining the lockside and we got chatting, as you do.  She is really upset about the upgrading of the towpath, as her gate opens onto the ramp leading down from the lock and she already has to take care not to get knocked over by cyclists – the visibility is poor, as I could easily see.  She is also worried about the effect diggers might have outside her cottage, as there has already been subsidence on the other side of the lock.  CRT has told her that they want to ‘encourage people to cycle to work in Watford rather than using their cars’ but as articles in the magazines have pointed out, they don’t seem very interested in the views of boaters, residents or walkers.  In the photo below you can see where the path has to bear right as it goes down past the far end of the cottage – it is very easy to see her point and I wonder whether anyone from CRT has ever been out there. 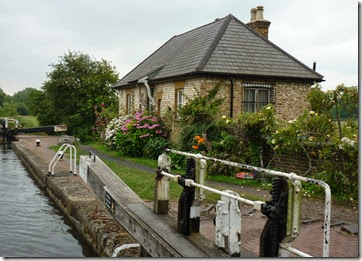 Near Home Park lock is a leisure park of some kind, unless there really are dinosaurs in Hertfordshire! (if that’s where we are). 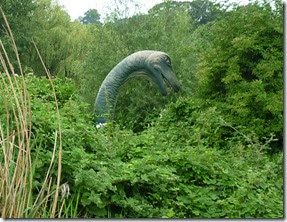 We soon caught up with a single-hander on board Fingall, which he bought 4 months ago, and shared several locks with him until we stopped for lunch at Apsley Marina.  At one lock we saw an unusual combination – it turned out to be 3 boats as well as the car! 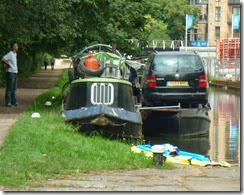 When we stopped, I also had to bathe a grazed knee and hand - a bollard at the last lock had leapt out at me and I smacked down onto the concrete. Ouch!  I am crossing my fingers after application of Arnica ointment to my knees and forehead that I won’t have too many bruises. At least I didn’t knock myself out – thick head obviously.  At Apsley there are bollards outside the marina for the use of residents, who have to open a bridge across the towpath to get in, but there were no notices to stop us mooring.  There is an Elsan point and rubbish disposal, both of which we made use of, and recycling bins which were unfortunately full.

At the first lock this afternoon another single-hander was waiting to buddy-up with someone, and we shared with him as far as Winkwell, where we grabbed the last space on the 48-hour moorings above the swing bridge.  It was cool and shady after a long hot day.  We have done a lot more than we had anticipated the last few days, partly due to buddying up for locks but also to get past built-up areas to find quiet and shady moorings.  We went to the Three Horseshoes to eat and had a great view from our table canalside; it’s a long time since we’ve sat out late without jumpers. 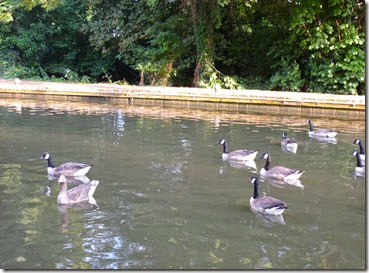 A cool beer went down very well but the menu was expensive and not very exciting, though it was tasty enough.