Well, no rain overnight or today in spite of the forecast.  It’s very sultry though, shorts and t-shirt weather all day, though cool enough for the morning’s cruise.  First up was Widewater lock, with the quiet and peaceful marina below it due to be bisected by HS2 – horrible thought.  There are protest signs all over the place. 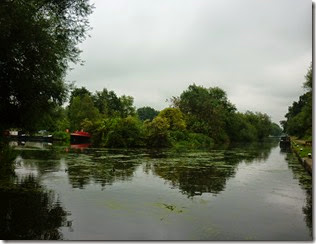 At Black Jack’s lock we had to beware of this chap who had his eye on us – though as there was an arm lying on the grass we thought we were probably safe!  He was chained down to protect the passers-by -

though this was probably because the B&B at the lock had had a carved totem pole stolen a few weeks ago.  At Coppermill Lock, where there were two strong flows coming in below the lock, we disposed of rubbish and recycling, and at Springwell, with no boats around, Dave grabbed the opportunity to change the gas bottle, which had just run out.  At Batchworth there are 2 locks – one takes you up onto the river Chess which is navigable for a short way, but they don’t seem to want you to go up there ….. 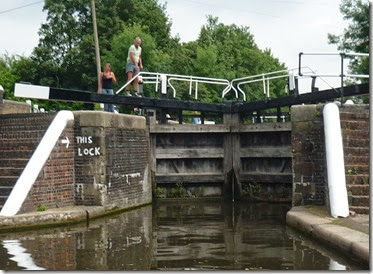 We paused briefly at Frogmoor Wharf, which is now a Tesco mooring, to get a few things, then stopped for lunch shortly before Lot Mead lock, where it was a lot quieter.  It got even hotter after lunch, with the sun coming out occasionally, and we carried on up to Cassiobury Park.  As we arrived at Ironbridge lock there were a few children keen to help with the gate, but by the time we left all the gongoozlers had come out of the woods – I think this is the most I’ve seen at one lock (not counting Camden where they are not there to watch the boats on the whole).

We moored below Cassiobury Park locks in some shade.  Though there had been lots of boats this morning, with all the locks in our favour – for once – there were much fewer this afternoon.  Dave got on with some jobs in the engine hole, including putting a bilge sock in the bilge.  We had not heard of these until we saw a small article in last month’s Towpath talk, with an email to get a free one from The Green Blue, an environmental project run by the RYA and the British Marine Federation. The idea is they absorb all the oil and other nasties from the bilge so when you pump the bilges the water is pretty clean.  Anyway our free one arrived before we left for this trip and it is now in place.  It’ll be interesting to see how it performs.

Although there had been thunder rumbling around, after we’d eaten we thought it might be cool enough to take Meg out at last.  We found a path which led up through the woods to a golf course, where she belted around after imaginary rabbits and had a great time where she probably shouldn’t have been ….. 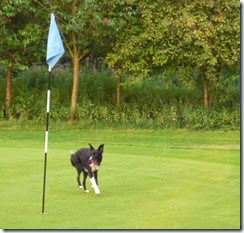 You can probably tell golf isn’t our game.  We found our way back down to Ironbridge lock, where we crossed into Cassiobury Park which was full of families when we came up the lock.  Now, with the kiddies all gone home it was Meg’s turn in the river Gade – this dog who was such a wuss with water when she first came to us! 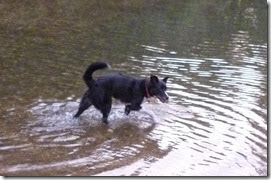 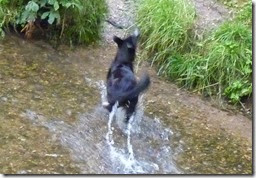 There is a miniature railway track through the park and we were lucky enough to see a fox on the far side.  He clearly knew we were no threat the other side of the fence and calmly gazed at us for a while before slipping quietly away. 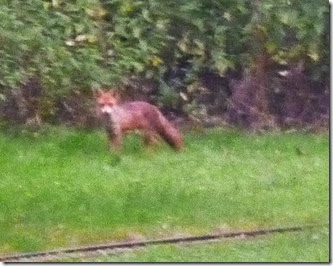 Not a good photo on my little camera but it’s the only fox I’ve ever caught on film!