Gosh that was hard work!

Saturday 30th May – New Islington to Chadderton
Up in brilliant sunshine soon after 7 (after being woken several times by the geese) and by 8 we had shuffled across to the services to fill and empty as appropriate.   I took this pic from the boat just before we moved over – the swing bridge that protects the far side at night is open.. 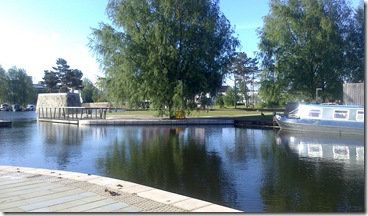 By 8.40 we were approaching the first of the 18 locks to get out of Manchester.  It was all going so well in the sunshine!  Oh dear – as we approached the first lock the engine cut out. 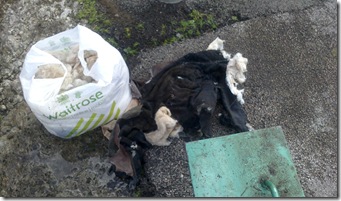 This is about half of what we cut off the prop.  It was some kind of large cushion with a very thick fabric cover, and stuffing that had partly exploded into the water.  It took 2 hours to clear. Dave did most of the work but I did half an hour when he managed to cut himself.  Anyway we were on our way again by 10.30.  Most of the people we met were fine, someone jokingly offered his services to get down in the water to clear the prop!  but some of the areas look really deprived in spite of the green spaces around them.  The Miles Platting area was friendly and didn’t look too bad, even had a cormorant on top of a lamp-post. 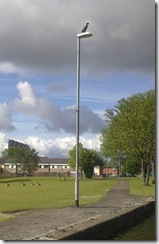 Miles Platting also has a large mill opposite a playpark and sports area; it looks as though it is being converted to flats. 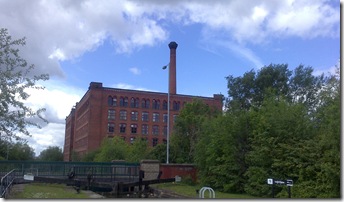 We were very glad of the folding bike which enabled me to lock ahead.  Yesterday we bought some snacks in M&S in Piccadilly, so Dave had his peanuts and squash on the boat and I had a packet of falafels and a bottle of squash in my bike basket and we just kept going till we cleared Failsworth later in the afternoon.  There was a pub at one point, behind some security fencing to protect it from towpath vandals, and a very loud drunk woman in the garden – this was about 12.30.  At one lock there was a lot of water coming down and it was hard to operate the windlass while keeping my feet dry – but no worries about water levels yet anyway. 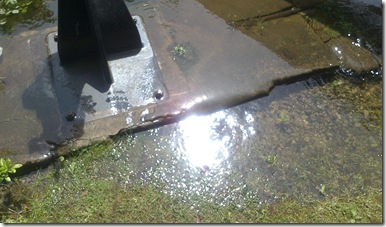 There was a large Morrison’s further up, where I managed to dash up and get a paper while Dave worked the lock.  We eventually cleared lock 65, which is supposedly padlocked at 4, by 3.30.  At the next – phew, the last – lock there were 2 boats waiting above for CRT to arrive as there was a problem with a paddle which wouldn’t close.  They had been stuck for 2 hours but luckily for us the CRT guys were just arriving.  We weren't really held up but the other boats had a long way to go for a ‘safe’ mooring as recommended by CRT – there are apparently some ‘very dodgy characters’ around the sixty-something locks...
The last work before we could moor was the Grimshaw Lane lift bridge.  We've not seen a vertical lift like this before, only the drawbridge type. 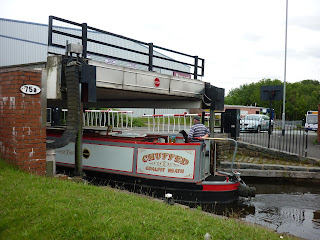 And soon after saw some wildlife! 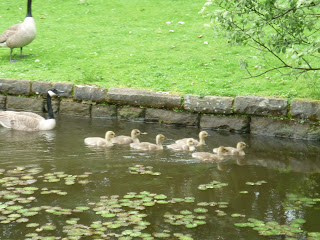 We finally moored for the night at the River Irk Aqueduct, just past the Rose of Lancaster pub, the first recommended mooring above New Islington.  Peaceful, countryside views, cake, friendly dog-walkers, birdsong, swallows in the air, more cake and relaxation – what a relief.  Dave listened to the Cup Final on the radio and I just drank tea (till it was time to drink wine).  And eat chocolate.  Well I think I deserved it, don’t you?