Tuesday 20th August; Thrupp to Oxford
When we set off at 8.30 it was sunny.  The Boat looked lovely in the early sun, but the gravel works a little further on in Kidlington must have made the permanent moorings there a very noisy place to live. 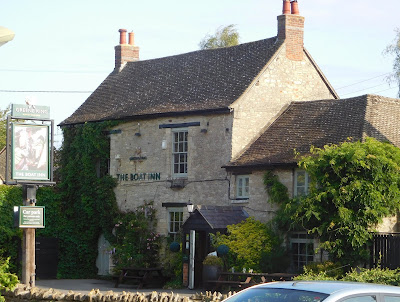 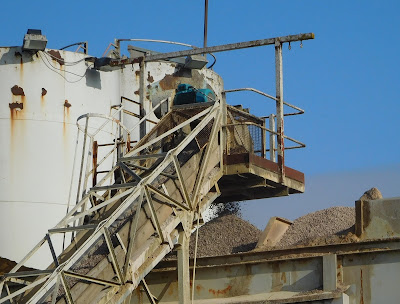 It was still chilly enough on the shady cut to need a fleece and woolly hat.  There were quite a few permanent moorings.  This is one way of ballasting your boat, though I’m not sure how well it would last if it were cruising. 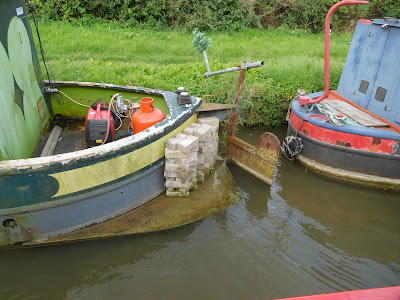 Once we got to Roundhams, the first lock, the work soon warmed me up.   The bottom gate was leaking so badly that I had to keep both paddles open in order to get the top gate open.  Kidlington Green was less deep and easier, and also had a lovely crop of blackberries for us.

At the horrible Drinkwater’s Lift bridge, CRT were in attendance trying to correct the balance, so I didn’t have to work it.  Hurray!  We stopped for water at the point above Duke’s lock, and were passed by the hire boat that had been dogging our footsteps, so to speak.  By the time we had filled up they were long gone, and after a boat had come up Duke’s lock we went down.  The field where the dredging spoil was being spread just a month ago has greened over and there is no evidence of dredging – apart from some easy cruising and this notice.  It shows the locations for the dredging that has been taking place over the last few months. 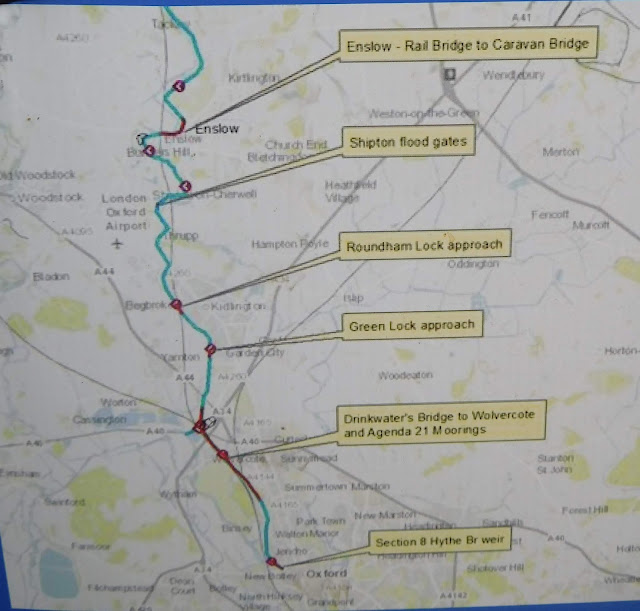 There is another water point at Perry’s lift bridge, where we wanted to stop to empty a cassette, but the hire boat was there (we should have waited to get our water!). So we stopped on the bridge moorings temporarily.  Then it was on, under the decorated Frenchay bridge 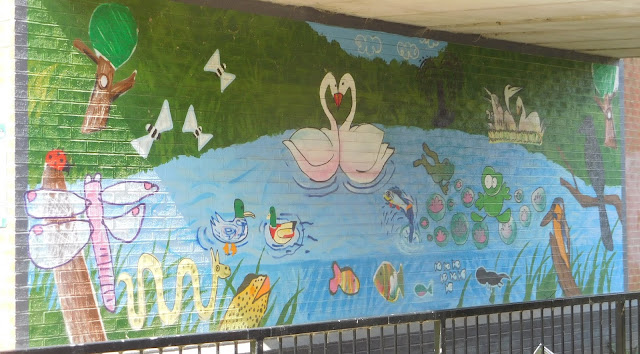 and we moored at Jericho as we usually do.  We had run out of bread, so I made a quick loaf of soda bread for lunch 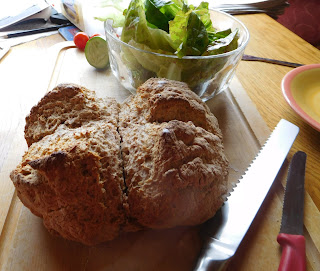 before we went down to the Ashmolean to visit the Pompeii exhibition.  It was fab, though not as large as the one at the British museum many years ago.  There were objects we are still familiar with

And some cooking pots we would not use today, 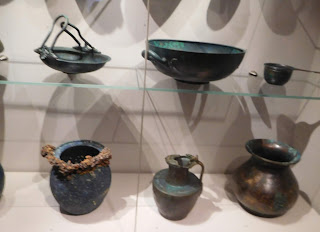 though the bun tin looks familiar (but not a good photo unfortunately). 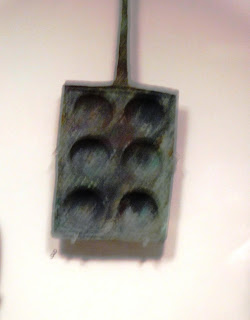 They even had non-stick 'red' ware with a special coating. 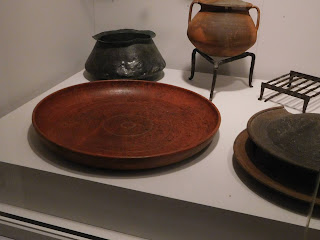 We saw the lovely fish mosaic we remembered from the London exhibition – we bought the poster then, though I fear it is long gone now. 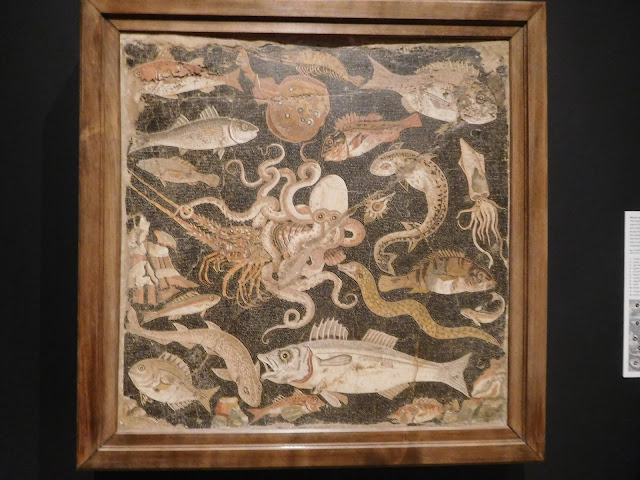 You might think that the cooking pots were fairly rudimentary, but just look at this decorative strainer – a bit smarter than my plastic colander! 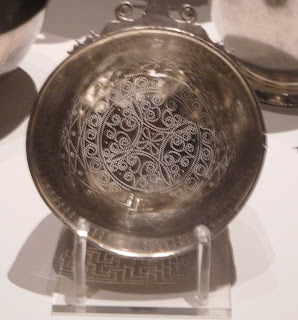 There were some examples of carbonised foodstuffs recovered from the excavation (you did remember Pompeii was smothered by lava and ash from Vesuvius, didn’t you?) 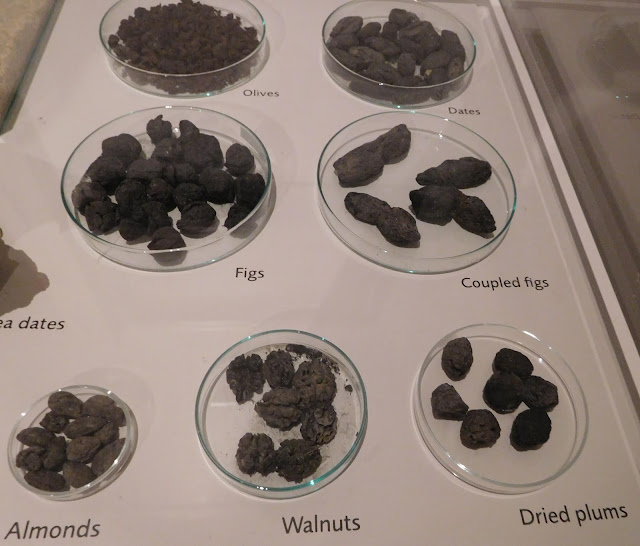 There was even a cast of a poor lady who had been overcome.  The cast was in resin and showed her poor mouth agape in her last agony.  It didn’t seem right to take a photo.

But my favourite exhibit – very appropriate for a boater, don’t you think?  was a chamber pot! 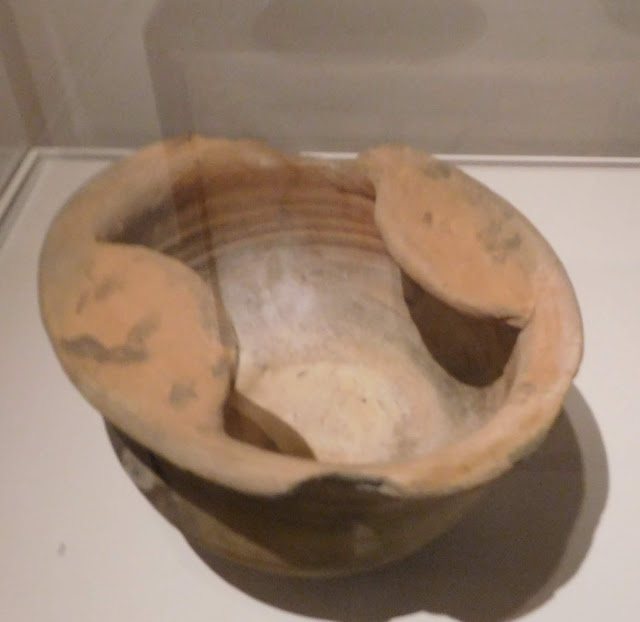 On our way out we passed a (free, unlike Pompeii) exhibition by an artist who began his career in the GDR before the unification of Germany.  He used A R Penck as a pseudonym, which he adopted to avoid persecution by the authorities.  The stick man motif appears in most of his work.  It made us think, once we had read the info about him, but it’s not what we would fancy on our walls. 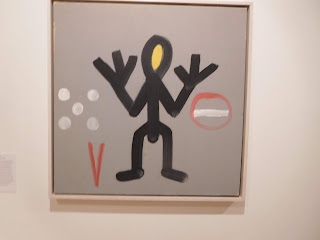 When we got back to the boat, we took Meg back up the canal to Aristotle bridge for a play in the park, and came back via the Bookbinders Arms in Jericho for a pint.