Meg woke us up at midnight, warning us of some dreadful monster outside.  The morning proved it had just been an innocent cow wandering by, who had left evidence of her passage right outside the cratch.

We started cruising at about 9.15, feeling as though we were the only boat on the cut.  But that’s never really the case, is it?  We had to wait at the first lock, Heyford Common, for one going down and one coming up.

We had a plastic container ready at the next lock, Allen’s, at Upper Heyford, for we knew there were some good blackberry bushes here.  There was just enough fruit to add to the apples we had picked at home.  We hope there will be more ready on our way back!

As we moved on to Dashwood lock we were caught in a couple of heavy showers, which was a shame for the poor chap we passed who had just put a large washing load out to dry.

We should have had lunch above Dashwood lock.  There were 4 boats waiting, filling the lock moorings.  The first went down, and then there was a long wait while another boat approached from below.  The next went down, another longish wait.  Then, joy! The two in front of us were together and short, so they squeezed in together. They were very relaxed about the whole thing, which was fine, but we were getting hungry by this time.  Eventually it was our turn, an hour after we had arrived. 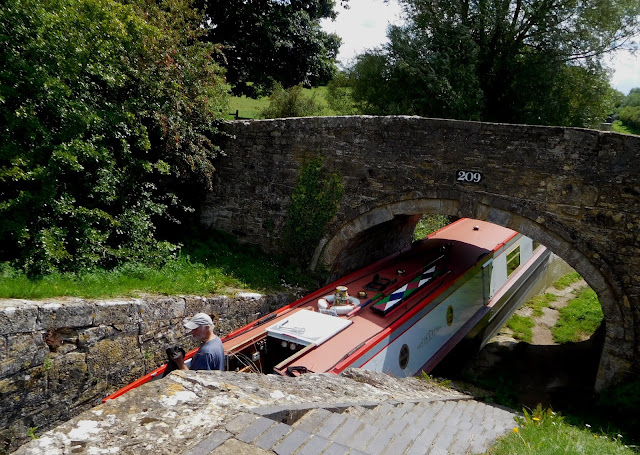 We stopped for lunch on the way to the next lock, Northbrook, hoping the boats in front would have all moved on by the time we started again.  They had, or were moored for the day so we had a quiet cruise down to Pigeon lock.  The quarry moorings were deserted, but were not for us today.  The pipe bridge nearby had a couple of herons keeping an eye on things, but only one stayed put for a photo.

We passed a dredger moored up on the offside, then at Gibraltar there was another with two pans ready for the next stage of dredging. We were quickly down the river section and were soon entering Thrupp.  The first moorings were full, so, hearts heavy we pulled in at the facilities point to fill and empty, and also to drop a couple of books off at the book exchange.  We expected to have to move on past Kidlington.  Then I looked round the bend at the bridge to see several lovely spaces just waiting for us.  So, watering up completed we went through the bridge and had a choice of moorings for the night. 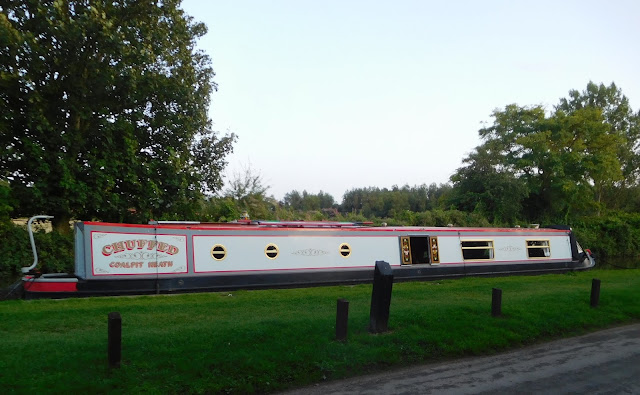 We went to the Boat for a celebratory drink and a meal – partly for the luck of the moorings, but mostly for the birth of our third grandchild.  This is why we opted to come back down to Oxford – the travel options are a great deal better than the other routes we could have taken.  So in a couple of days’ time we hope to be taking the train from Oxford to go and visit.