Good and bad timing along the summit pound

The forecast for today was light rain from late morning, then heavier this afternoon.  So we were on our way by 8.30, relieved we had finished Napton locks yesterday.  We hadn’t been going long when we came across a swimming cow.  She had been paddling along below her friends in the field, and before we got to her was right under a bush, having a nibble.  Suddenly, she turned into the canal and swam – unfortunately no picture – to return to the shallows and her friends.  There was a low bit at the end of the Armco where she could walk out, so we didn’t feel we had to notify anyone. 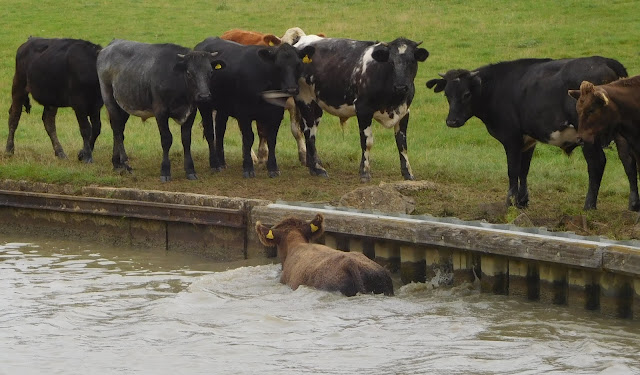 A little further on, a long way from habitation, was a small tent.  No fishing gear visible, so we thought it was probably a long distance walker having a lie-in.  He should have been up and about to beat the rain, we thought, and get a few miles under his belt.  But before long it had started – light, but enough to need waterproof jackets. 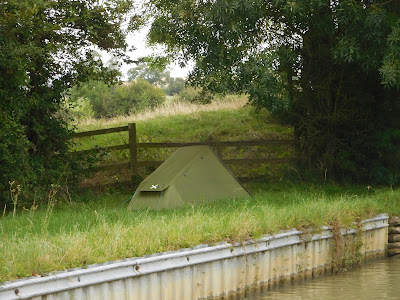 Then we reached the super-bendy bit between bridges 126 and 127, and the depredations of HS2.  Here, if the huge machines weren’t whizzing back and forth, you might not notice it across the wheat field - 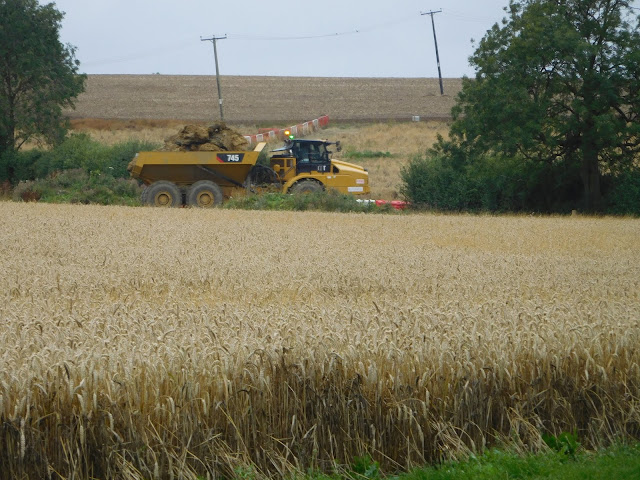 But a little further round was this enormous heap of subsoil, getting higher by the minute. 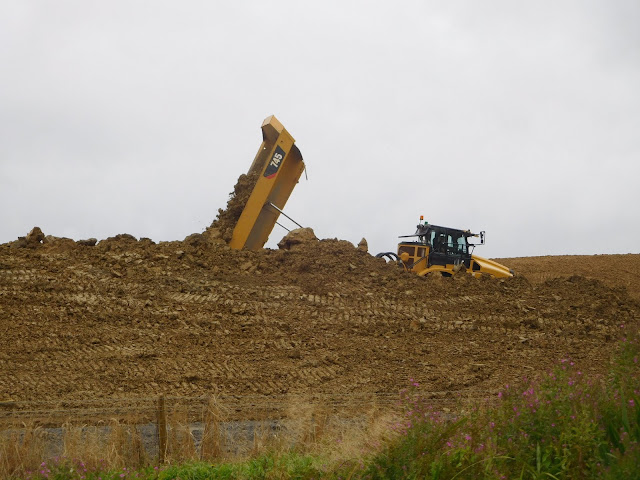 The rain was now hard enough to need over-trousers too, and boaters were mostly suitably dressed, though some hirers clearly didn’t have waterproofs, or couldn’t be bothered to put them on.  Not NB Tyseley and the Mikron crew though, on their way towards Calcutt for a performance.  It’s a shame our timing couldn’t coincide. 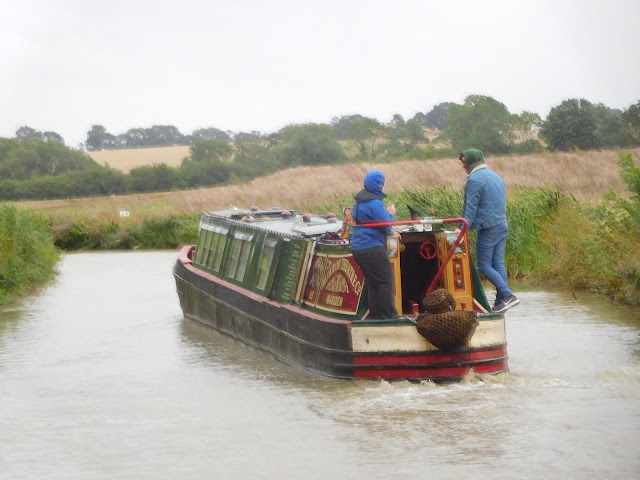 There hadn’t been a lot of boats coming from Fenny, till, naturally, the most awkward bridge – 131, Griffins Bridge, where the canal turns almost through 180°.  We knew there was a boat in front of us and they had gone through ok – or so we thought.  Suddenly a boat came through far too fast and ended up on the towpath side of the canal, clearly not realising there was a tight bend to be negotiated.  We had time to safely change course and passed him on the ‘wrong’ side (starboard to starboard) only to see, just through the bridge, the stern of the boat in front which must have been pushed into the trees.  They didn’t have anywhere else to go though, as another boat had arrived.  Luckily no contact was made at all, though both boats had to be passed on the ‘wrong’ side, and the usual comments about meeting boats in bridgeholes were exchanged.

We called in at Fenny chandlery for a gas bottle, and continued in the rain through the ‘tunnel’.  The collapsed towpath repair we saw last trip has been completed. 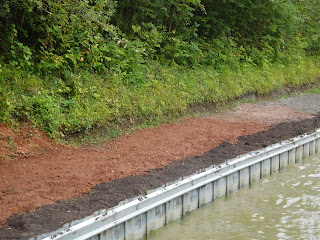 The rain had eased a bit and we were enjoying the cruise round the sweeping bends on the way to Claydon locks.  On one, an oncoming boat was on the wrong side and appeared to be changing course to get back to where he should have been.  Luckily we were going very slowly, but realised, too late, that he hadn’t changed course at all and was still coming towards us!  A quick slam into reverse was not enough to prevent a collision.  We were annoyed, as none of the four people at the stern had made any sign to show that they were in trouble. In fact they had positioned themselves wrongly and were trying to change course while ploughing through the shallows.  They apologised profusely of course, and we were very nice back to them, but at the very least they could have indicated that we were to pass to starboard.  We didn’t get stuck although they had pushed our bow into the shallows.

After a quick check inside – open cupboard doors, tilted glasses (but thankfully no breakages), and a TV that was perilously close to the edge of the shelf – we continued to Claydon locks.  The renovations at the top lock cottage were continuing, with a new ‘Private’ sign by the gate. 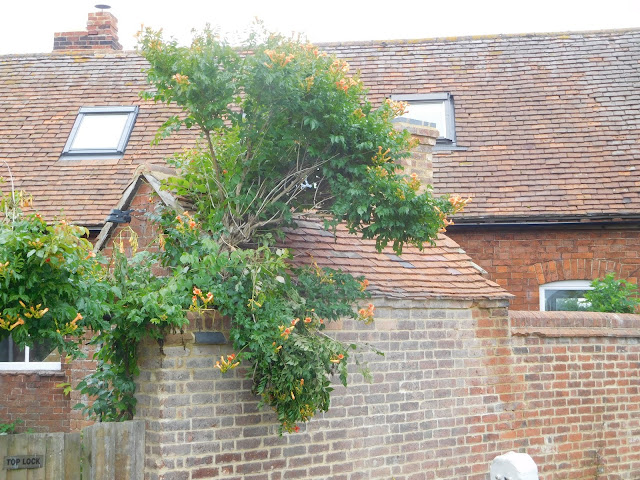 I hope they keep that lovely orange climber (Campsis, I think).  We were fortunate to meet boats emerging from all the locks except the last, and moored below the locks for a late lunch. The rain got worse for a while, and then eased off again, so we opted to drop down to Cropredy.  Not the best decision it turned out – the rain got harder and my jacket turned out to need reproofing.  At one of the locks was a boat that appeared to have no steerer - without proper waterproofs, the steerer was crouching down to try and avoid the rain as he came out of the lock.  He then proceeded to zig-zag his way towards the bridge, luckily managing not to hit anything as he went.  Dave was waiting between the bridge and the tree but can't be seen in the photo. 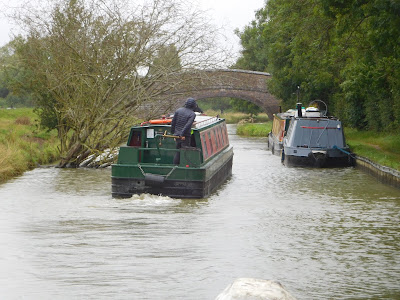 We got to Cropredy and were astonished to have a wide choice of moorings.  So, easily finding somewhere that wasn't under a dripping tree, we moored, on went the Mikuni, and I could dry my sodden jumper and waterproof.

We had been thinking of having a meal in one of the pubs, but the weather was so miserable we stayed on board.