It got rather windy …

Sunday 18th August; Banbury to Somerton Meadows
It rained overnight, and it rained over breakfast.  But it stopped, Meg got an early play in the park, and I had the joy of a Tesco visit.  It was only for a few things, but as the wine was 25% off if you bought 6 bottles, I was jolly glad I’d taken my shopping trolley!  On the way back I noticed a Waitrose had opened at the road junction – noted for future use, as it’s half the distance to Tesco.

Dave had spent the time with some Sikaflex, stopping the leak that had developed under the cratch board.  We didn’t leave till about 11, in sunshine, pottering gently past the almost empty Spiceball moorings.  The town centre moorings were fairly busy, in spite of the building sites on either side.  Not pretty.

There was a bit of a to-do at the lock.  I had the lift bridge open for Dave to come through to the lock which was just being vacated by a cruiser.  The crew was closing the gate – I yelled, but he probably couldn’t hear.  Meanwhile, the boater on the water point above the lock had spotted the bottom paddles being opened before the gate was even closed and the top paddles still open, so she yelled too, and got an earful back from the lady on the bottom gate.  But the bottom paddles were closed; I opened the top gate again and was profuse in my thanks.  Talk about two sides to every question – though we had been told she was abusive to the crew on the water point, she was now full of apologies for ‘not having seen’ us.  Whichever, we parted on friendly terms.

It was perfect cruising weather as we left Banbury, with puffy clouds and a light breeze tempering the heat of the sun.  The M40 was busy with people speeding along on their Sunday outings. 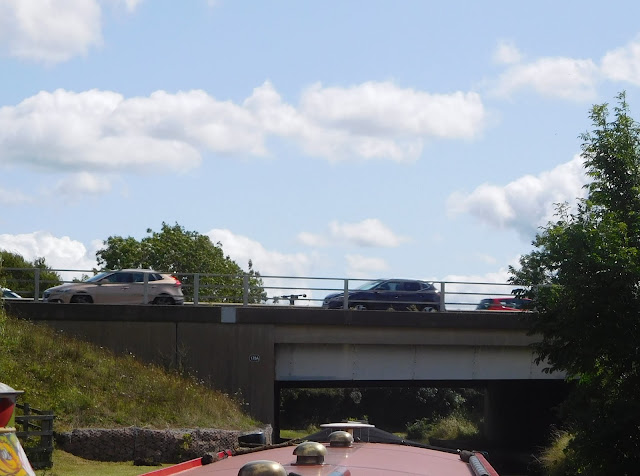 There were enough boats on the move to make life interesting and friendly at the locks.  As we’d had a late start, we continued to Nell Bridge before stopping for lunch.  By now the breeze was stiffening, and although it was quite sheltered going through Aynho it was very noticeable on the more open areas.  Between Nell Bridge and Aynho we spotted an enclosure of what looked like wild boar in the middle of a field of goats. 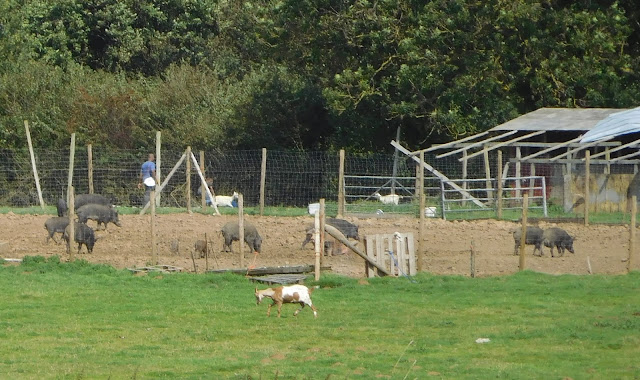 At Aynho lock we had a bit of a wait while some young teenage lads faffed about with the gates while their Dad had trouble holding their day-boat in the wind.  Eventually we were in. 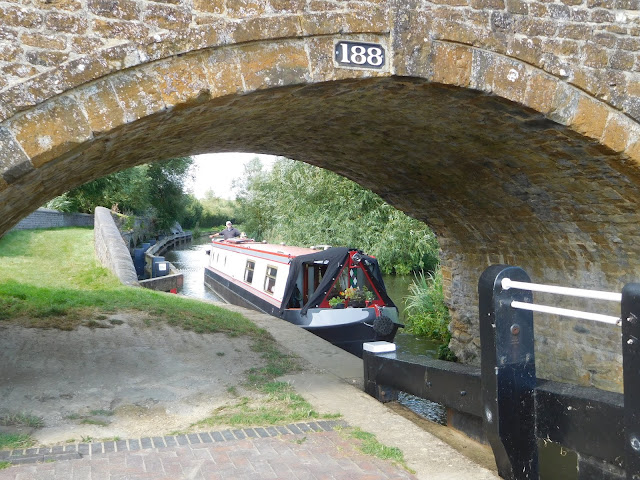 Once we had come through Aynho itself, the wind had become very strong, and by the time we got to Somerton Deep lock it was so bad I could barely hold the boat on the centre line as we came into the lock moorings.  Dave had to come and take over.  A boat was just coming in from below, and I went to help close the bottom gate, wondering if my arms still worked!  They did luckily, as the top paddles were extremely stiff and the other crew was unable to shift them with an ordinary length windlass.

We were a bit worried the wind would prevent us mooring on the meadows, but the canal had curved round a bit, and a belt of trees was sheltering the canal, so it was easy after all.  As we came under Somerton Road bridge just before the meadows, Meg suddenly sat up and whiffled her nose – she loves it here and was out waiting for playtime as soon as she was off the boat. 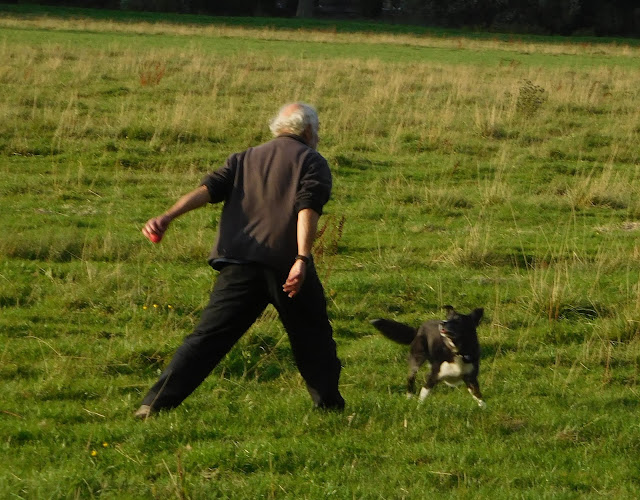 10 miles, 6 locks, 2 lift bridges (Banbury, and Chisnell which was down for a change).