We had an early start today, before 8am, for two reasons – one, rain is forecast for later, and the other, Dave is going to collect the car from Calcutt and really did not want to be wet before he even started!  It was quiet grey weather and it stayed that way.  The elegant Linacre bridge was the first point of interest.  It is one of the rare surviving examples of Brindley’s original structures. 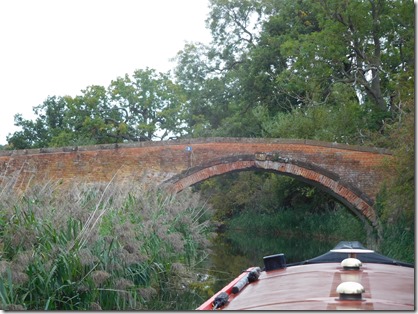 There is nothing dramatic about it, just a fairly low parapet quietly curving down to the bank on each side.  The locks unfortunately are all doubles and were almost all against us, and the gates are heavy – not impossible by any means but they take a while for a smallish crew member to get moving.  I managed to get a few late blackberries at one of the locks.  To save time, as Dave has a train to catch, once the locks were closer together I left him closing up while I went ahead to empty the next lock.  The banks of the Barge canal are very reedy and there are few spots to moor, with more fishing spots than open areas for mooring.  Once the sun made a feeble, failed effort to break through the clouds. 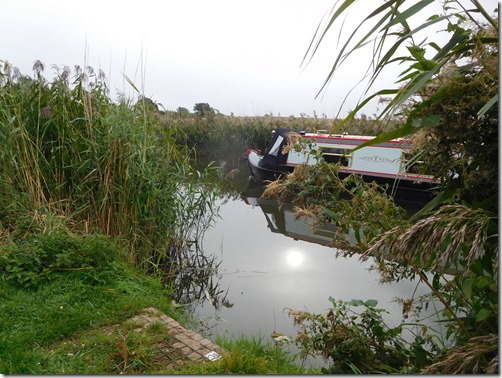 But the rain held off until we reached the playing fields with their Saturday morning matches on the outskirts of Droitwich Spa, and it was really just wet air as we moored.  Luckily the towpath moorings on the park were empty.  The pontoons in Netherwich basin were all vacant, but you need the BW key to get into the park which is inconvenient if you have a dog.  Dave left for the station at about 11, and Meg and I collected a bag of conkers and played ball.  By our mooring was a signpost showing the furthest parts of the network reachable from here by water.  We have been to Llangollen but not the others (yet). 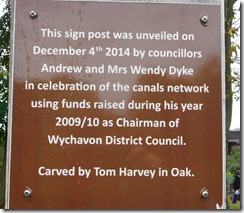 It was raining lightly and the signpost is much higher than me, hence the odd splotch.   It was still only drizzly when I nipped over to Waitrose for a bit of shopping.  The little bakery nearby was open and I got some nice-looking rolls and fruit scones.  I also disposed of all the paper, card and glass in the car park bins, and a couple of plastic milk bottles went in the public bins in the park.

After a while the rain got a bit heavier, but Meg still needed a decent walk.  We had a quick play in the park, then went for a mooch around town.  The shopping centre is surprisingly large once you find it – I thought it was only Waitrose and the run-down High Street!  There is a Morrison’s, and many of the high street names such as Boots, WHSmith, Specsavers etc.  There are artworks too – this one on the edge of the shopping centre is ceramic.

At the other end is a sculpture of saltworkers; the whole family was involved in what must have been pretty unpleasant work. 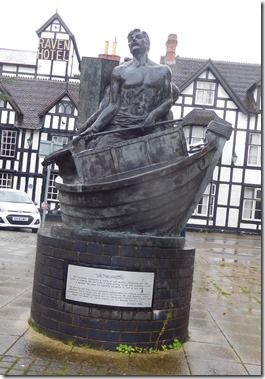 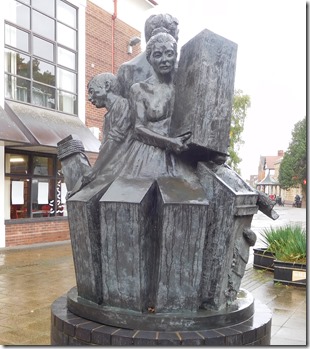 Droitwich is proud of its history as a centre for salt production and we wandered around the back streets to see the Tower Hill brine pumping station, which has been restored to working order https://www.visitdroitwichspa.com/droitwich/high-street/.  It is visible but protected behind a grid, and it was too dark to see much.  The weather was such that photo opportunities were a bit limited anyway.

We wandered back towards Waitrose, near which is the Gurney’s Lane brine pump. 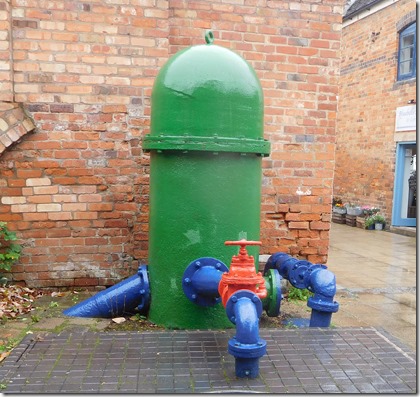 Then, as Meg had been such a good patient girl we went into the big pet store behind Waitrose to buy her a treat.  I much prefer small independent pet shops as you can have a chat, dogs are usually given a biscuit and the treats are cheaper!  Amazingly she didn’t immediately pick up one of the treats which were displayed at nose height though she did move towards a bucket of balls very purposefully.  After buying her a chicken’s foot, and getting a couple of tasty little samples from a bowl on the counter, we crossed over to the park for another, very wet, game of ball.

I spent the rest of the afternoon cleaning through the boat, setting the fire ready for later, and adding some more conkers to my spider deterrent system.  It’s not that I mind spiders particularly, it’s their cobwebs which tend to catch dust and expose my tendency towards slovenliness.  A steady procession of boats went by, mostly hire boats from Worcester turning in the basin before starting the return journey, though we were joined later by a private boat, also with a dog, who moored up next to us.

Dave made good time in his mission and was back before 5, having walked, in pouring rain, from the marina where he had left the car.  We thoroughly enjoyed the fruit scones from the bakery.  We put the Mikuni on to warm the boat up and dry some things off, and a little later lit the fire for a cosy evening inside while the rain rained steadily for an hour or two more.