Rain, and an expensive day

At the end of the wharf here were two Avon Navigation Trust workboats.  The longer one was tucked in behind a long wide pontoon and the small push-tug can be seen in the photo below, to the right of the pontoon.  We are opposite. 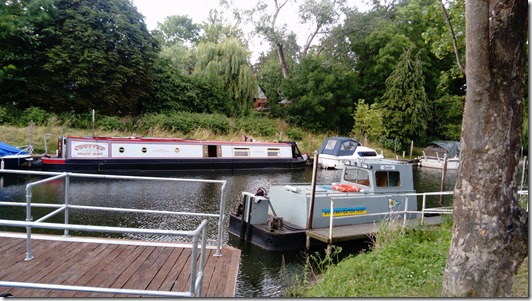 At 8 this morning three CRT workmen appeared.  They detached the pontoon from the long workboat and fixed it to the little tug which slowly and skilfully reversed out of the wharf 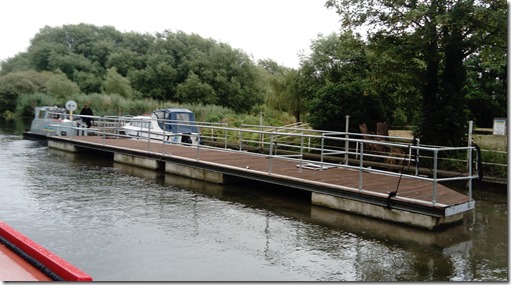 with one man making sure they didn’t touch the little cruiser moored further back, while a third opened the lock gates. 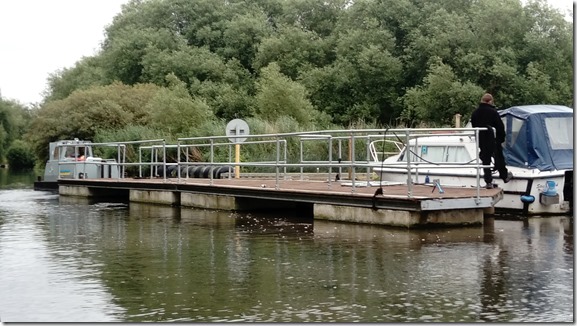 While they descended the lock, I chatted to the man about their day.  Although this lock is wide enough for the tug to slip in beside the pontoon, some locks are narrower and they will have to take them through separately.  I imagine that is quite a job if the pontoon has to be bow-hauled in by hand. 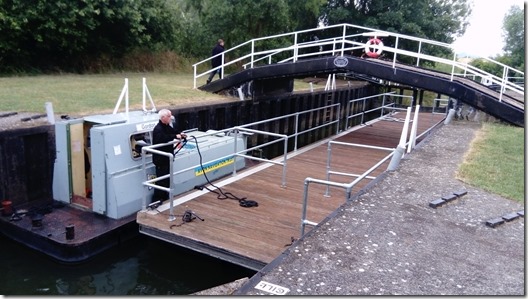 They were hoping to make it as far as Harvington (Robert Aickman New lock) tonight.  I would hate to meet that pontoon coming round a bend.  And I bet the hire boat that went down a short while later would soon catch them up and be none too pleased!

We pushed across before we left to use the Elsan point and take on water.  There were some interesting bracket fungi on a stump nearby.  The sawdust-like substance caught in the spiders’ webs seemed rather to be bits falling from the trees. 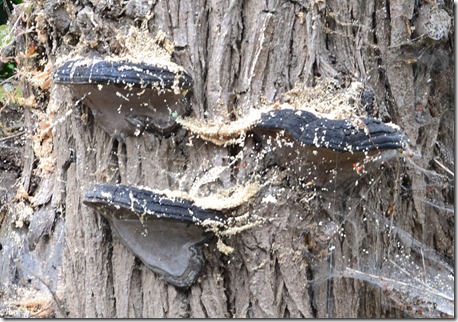 We were away soon after ten and it wasn’t long before we were at the first of today’s two locks, passing through some very pretty stretches on the way. 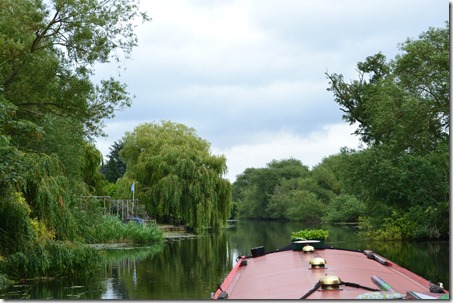 The first lock was open and ready for us, and two boats arrived at the top as we went in.  This lock, originally Weir Brake, was named Anonymous Lock after restoration, for the many donors who wished to remain anonymous. 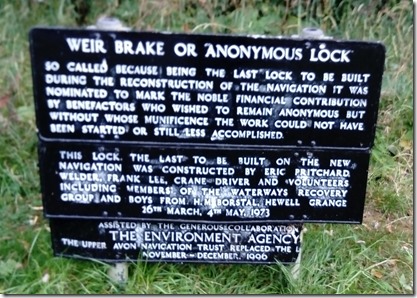 But Nicholson’s has it labelled as ‘Gordon Grey’ lock.  Gordon Grey was on the board of the restoration trust.

The last lock, Colin P Witter, was soon dealt with 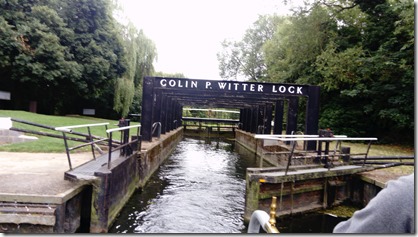 and Dave took a picture of the sculpture marking the completion of the restoration. 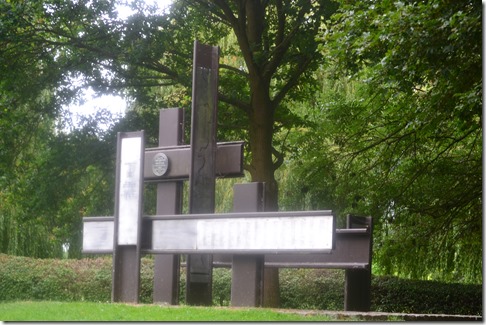 We moored by the park, a hundred yards or so before the ferry.  The rain started soon afterwards and set in for some hours.  But we had to go out; Meg’s underneath has been getting quite sore and we decided to get a vet’s advice sooner rather than later, as it has happened before and she ended up quite poorly.  So, fully togged up in wet-weather gear, we set off for the 15-minute walk and 45 minutes later, and £100 lighter in the credit card department, we were saying hello to Julie and Steve (Hakuna Matata) who were moored in Bancroft Basin.  But we were so wet we felt we had to decline their kind offer of hospitality.

Back on the boat, we drank tea and watched the hire boats carrying on as normal.  The scullers were out in force later on, and a large group of children and young people in little kayaks followed, all defying the weather.