Bit of a false start

Well …… the plan was for Dave to drive up to Droitwich Spa marina on Friday, with most of our gear and the dog.  The boat had to be out of the berth on Saturday.  We had hoped – as has always happened in the past – to be able to extend our stay for a few days as daughter Jen and grandson Finn were with us till Sunday, and we also had tickets for the Mikron performance on Sunday at our local RNLI station!

It was not to be.  The ‘owner’ of the berth wanted to come back in on Saturday, so off Dave went on Friday.  I was having some quality Grandma time at about 11.30 …… 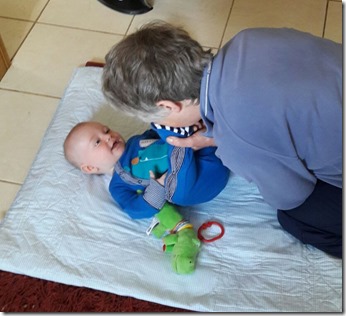 when Dave called, just an hour up the motorway – he had broken down.  Green Flag came up trumps; diagnosis (failed fuel injector, expensive and time-consuming) within half an hour, and a tow from Bridgwater services to the garage in Exmouth by 2.30.  Pretty good service.  I met him there and somehow we managed to cram everything into my small Fiat and he was all set up for a bonus bit of Grandad time!

He left again early on Saturday, this time in my car, and made it to the marina in excellent time.  After getting some shopping in he did the two jobs required to renew the Boat Safety Scheme certificate.  Last time he needed a mod to prevent the batteries moving forward or backward; this time he had to add a bar so if there was a side impact they wouldn’t tip towards the engine.  The other mod was to use a longer chain so that the spare gas bottle was also tethered.

Then, with Meg safely shut inside, he single-handed up the first of the Hanbury locks.  The volunteer on duty soon spotted him and came down to help him through the other two.  He reversed onto the moorings at the junction and got on with a few more jobs.

On Sunday  I waved goodbye to Jen and Finn and caught up with the jobs I had been distracted from over the last few days.  In the afternoon I went (with friends) to the Mikron Theatre’s performance of ‘In at the Deep End’, their production about the RNLI, which was held in the lifeboat station of our nearest town, Exmouth. 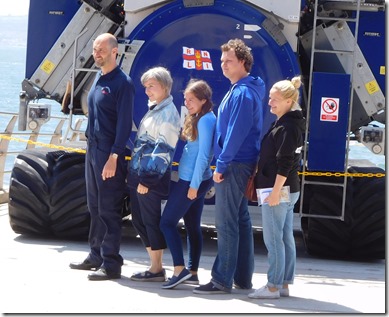 The four on the left are the cast members, but I’m not sure who the lady on the right is, as they pose for the local press.  As you can see it was brilliant sunshine outside but it made taking photos inside rather difficult. 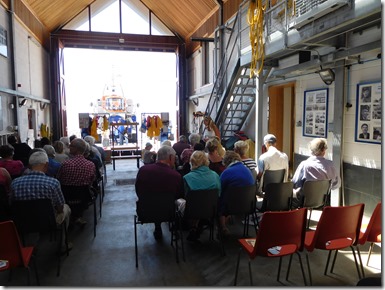 The audience sat inside the lifeboat station and the cast members were pretty much silhouetted against the brightness outside. But we enjoyed the production although the acoustics were far from perfect.  The cast, as usual, acted, sang and played their instruments with great aplomb and skill.

Afterwards we came out to join the holidaymakers along the seafront taking photos of our lifeboat, the RNLI R & J Welburn. 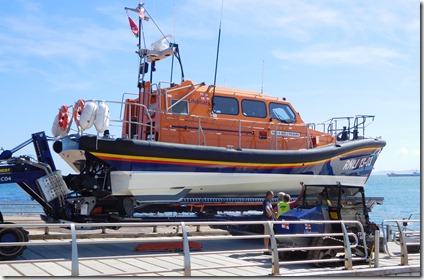 and here is the tractor thing which puts her in and pulls her out of the water. 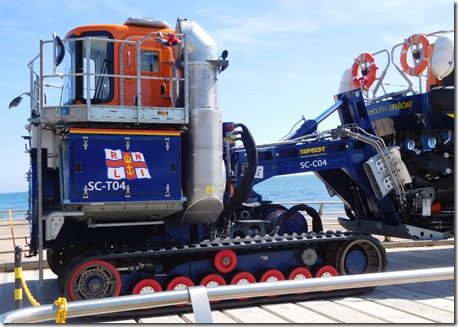 It’s amazing to think that our lifeboat service is almost entirely funded by voluntary donations – it’s up to us to keep our lifeboats going!

Meanwhile, back at Hanbury junction ….. after completing various paint and varnishing jobs, Dave had strolled over to the New and Used Boat Co to see what was on offer.  To his surprise several were widebeams – why, when all the routes from here have narrow locks?  Odd.

It feels weird writing the stats, as I wasn’t there ……

Half a mile and 3 locks