Although the rain had stopped by the time we pulled pins, it was still much colder than yesterday.  As luck would have it, our companions from yesterday had moored closer to the locks and were just pulling out as we came round the bend.  So rather than take on water opposite the Blue Lias pub, as planned, we opted to go straight up the locks with them. 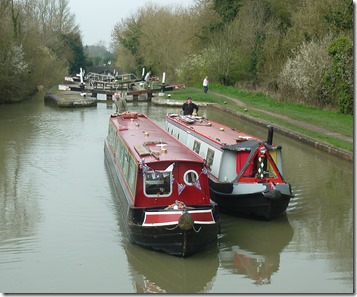 The Stockton gates are heavy, and one bottom set in particular, which looked new, needed two people to close them.  The primroses were carpeting the area where lime kilns and wharves once were. 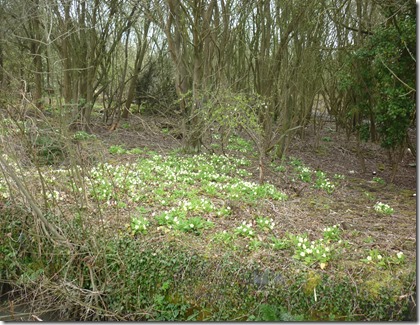 One of the old chimneys is still standing. 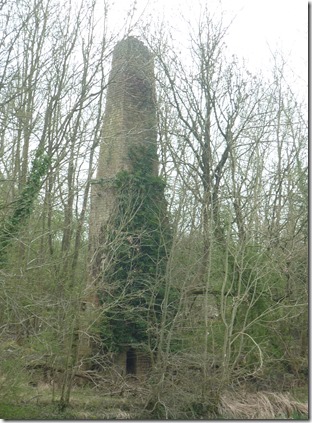 We waved goodbye to our lovely hirer companions, who had to make Gayton marina for handover day, and moored in a lovely sunny spot past the long-term moorings near Gibraltar bridge.  On the way we passed steam narrowboat Adamant moored at Willow Wren.  At first glance the tree behind makes it look as though it is in steam! 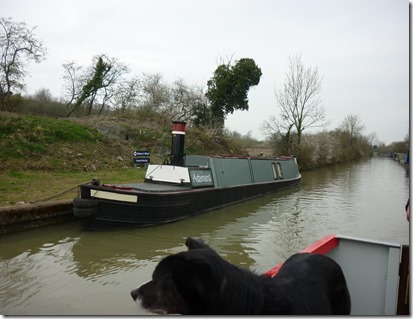 After lunch – chicken soup, made with the last of the chicken from the weekend! – we got on with cleaning the boat.  Dave did the brasses using a tip from a neighbour at Droitwich Spa Marina – Toilet Duck.  It cleaned off the tarnish much better than Brasso with just a little on a cloth, then I rinsed the tiny bit of residue off when I swept and washed the roof. They looked pretty good I think – this is before Dave Brassso’d them (actually with Waitrose equivalent, which doesn’t smell as strongly). 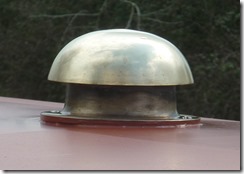 The sun came out and it got warm again.  It was a relief to have some dry towpath – I think this has been the muddiest trip we have had for a long time.  The towpaths have been so wet and muddy that the dog’s towels have needed drying every day.  The little cordless Dyson has been doing sterling service too. 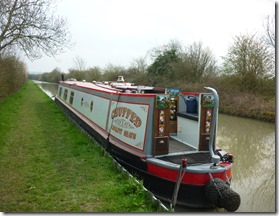 After an hour or two we moved to moor closer to Calcutt locks so Dave could walk over the lock gates to the office to find out our pontoon number for the next few weeks.  By 4.30 we were moored up and drinking tea before taking advantage of the dry weather for touching up a little bit of paintwork and cleaning out the well-deck.

Friday was wet.  Dave left early to walk to Napton to catch the bus to Leamington and the train back to Droitwich Spa to collect the car.  I started cleaning and replaced a gas bottle (well I got the chap to do the lifting in and out of the bow locker as I can’t quite manage it alone).  Then when the rain stopped it was time for Meg’s walk.  Rather than getting her across the lock gates (which she doesn’t like) onto the towpath (which would have been muddy again) we went up to the Napton Reservoirs, as the access road is by the marina gates.  I had to be a bit careful where we went as swans were patrolling, but saw plenty of coots displaying - 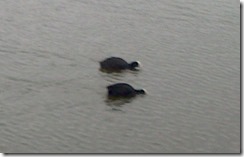 a pair of Great Crested Grebes doing the heart shape display with their necks, though no picture – and best of all, a large flock of swallows.  I thought I had seen one bird yesterday but wasn’t sure.  They were feeding above the water, chattering nineteen to the dozen in a tree and generally zooming around.  I think they may have just arrived. 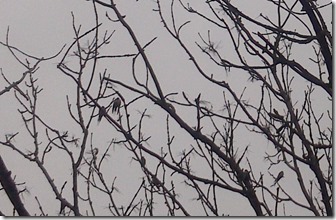 I only had my phone with me unfortunately so the pictures are really not up to much.

Luckily Dave had got a lift into Leamington so caught the fast train to Birmingham and had time for a look at the new New Street station concourse from the inside.  We decided to pack up and go home rather than wait for the morning.  Half past five is not a good time to be on the M40 in the Warwick area – but even so we were home by 9.  It’ll be a few weeks now before we are able to get back on board.