Hailstorms and a scary Aqueduct

Wednesday 6th April; on to Wilmcote

Not exactly a dry day today.  It stopped raining before we wanted to move, but was cold and windy.  We moored at Wootton Wawen to get some provisions.  Dave walked under the aqueduct to the Anglo-Welsh base to see if they had an engineer with Mikuni skills and I went into the farm shop and then on up into the village.  The farm shop is ok, but the vegetables looked very tired – you could almost have tied the rhubarb into knots – though I did get some bread and a delicious sausage roll and veggie roll.  Then I went up to the village shop, walking past the mill race.  Off to the left (out of the picture) is the manor house, looking grand but apparently home to a caravan sales business. 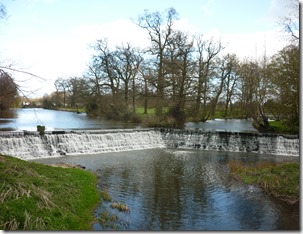 The village shop has a good selection of pet treats and I got Meg a pig’s ear.  I anticipated Dave might be some time, so I went into St Peter’s church.  Part of it is Saxon, and there are later additions from the 14th and 15th centuries.  I could hear some feminine chatter from further in, and a group of very friendly ladies emerged from the far end where they had just finished a mid-week communion service.  They were keen to tell me all about the church.  There is some beautiful modern stained glass which had unfortunately been vandalised.  The woman who created it also did some of the stained glass in the Chapel of Reconciliation in Coventry Cathedral. The ladies gave me their forthright views on last week’s Tim (West) ‘n Pru (Scales) programme which had been about the Stratford canal.  We haven’t seen it yet.  One lady had been interviewed for the programme about local history and some restoration in the village but had been disgusted to see that Wootton Wawen was represented only by a fleeting shot of the top of the Anglo-Welsh office.  She was particularly cross that T & P didn’t talk about the restoration of the canal – she remembered it when there were trees growing along the canal bed – and was not impressed by their quoting Shakespeare to shots of water and trees.  Anyway, the church is interesting and well worth a visit.  For any bell-ringers reading this – practice night is Monday! 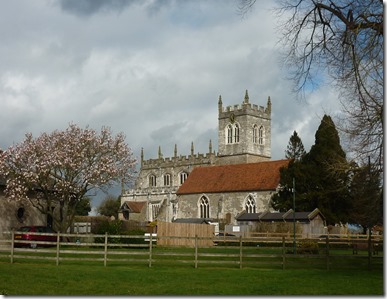 I got back as the weather broke.  We had lunch while a hailstorm raged about us.  Dave had found the hire base deserted, though everything was open, so we will still have to do without any central heating.

The afternoon started dry but cold and the wind was very strong.  Bearley lock was ok, but the Edstone aqueduct was frankly frightening.  The wind was blowing directly from the starboard side, and with the towpath on this aqueduct at the same level as the bottom of the channel, ie way below the boat on the left of us,  it felt extremely unsafe.  I shut the dog inside, and although I knew perfectly well there was no risk to us I held on tight all the way.  Dave had the tiller hard over all the time or we would have scraped the sides but even so there was quite a lot of banging as we crossed.  The picture doesn’t show the wind, but you can see how far down the towpath is.  I took this snap as we left it – I didn’t feel like slackening my white-knuckle grip just to take a photo any earlier. 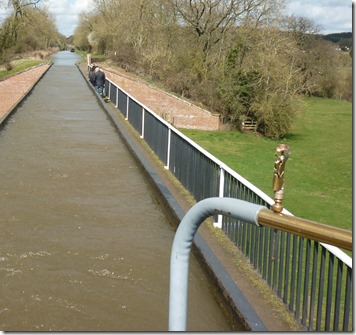 At this time of year with the leaves all gone you can see the bare bones of the hedges and appreciate where they have been laid in the past. 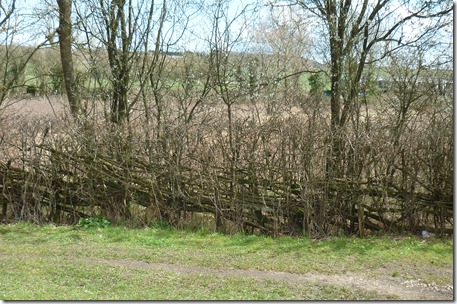 At 2.30 we pulled in before the winding hole at Wilmcote and Dave went on to check the moorings further up.  It turned out that our spot was the most sheltered so we stayed put.  Dave had a short window of dry weather to get some touching-up done of the paintwork before the next hailstorm swept in.  We could see the tree-tops tossing in the wind but it was calm at ground level.  It was a little noisy this evening, but we don’t mind sheep and lambs. 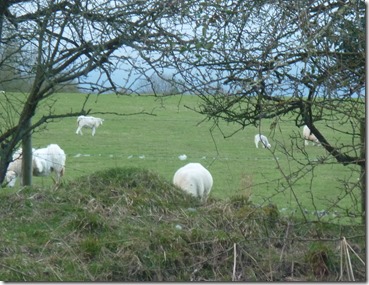 4 and a half miles, 1 lock, 2 aqueducts (Wootton Wawen and Edstone).