Robin in the tree – still there after all these years!

We woke up late to bright sunshine showing above the trees, but there was still frost on the shed roof of the wall by our mooring.  Before we left I went up to the village for a few bits in the shop – the towpath is a quagmire in places after yesterday’s rain, especially the narrow bit where the collapsing edge is fenced off nearer the bridge.  The sun on our backs was lovely but the air is still pretty nippy so no casting off the thermals yet.  Edstone aqueduct was a lot easier to cross than a few days ago, though it still makes me uneasy with the towpath so far below the boat. 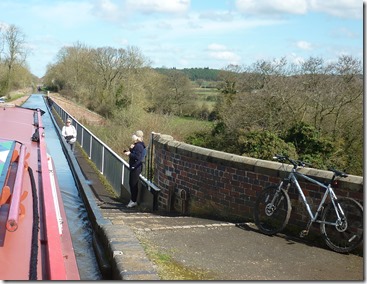 There is still plenty of blackthorn blossom frothing along the cut and below the aqueduct too. 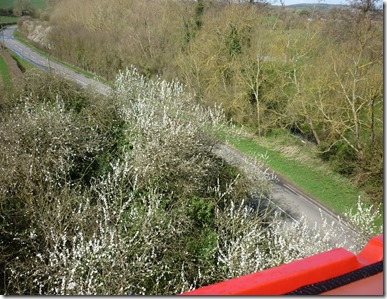 We thought we had problems with moles at home, but this invasion below the aqueduct is something else! 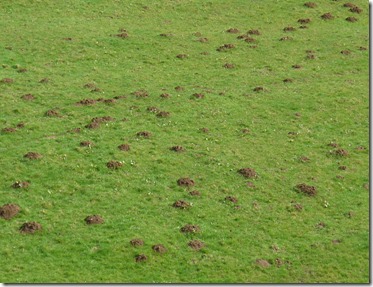 We stopped for lunch near bridge 50, where we spent the night last week.  The cloud had come across by now and it was grey and cold for the rest of the day.  Between the bottom and middle Preston Bagot locks is a house with a sheep on the balcony peering down; 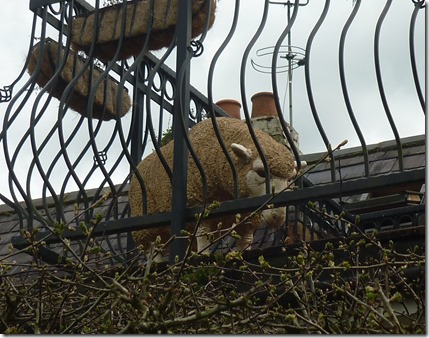 and the Reliant Robin is still there in its tree.  I didn’t spot it on the way down to Stratford, as the hedge has grown up and it’s difficult to see now except from the gate.  It could do with a bit of a clean.  Even my car isn’t that dirty!  I wonder if any birds have made a nest in one of its various cavities? 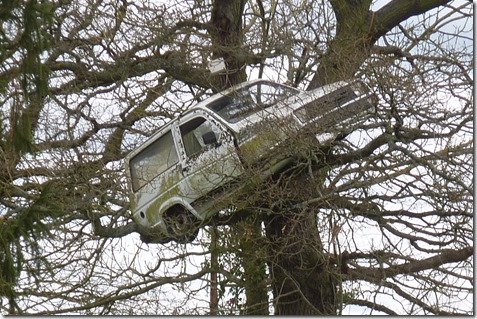 At the middle lock we crossed with a hire boat on the way back to Wootton Wawen.  The chap was on light steering duties only – they had started down Hatton locks only for him to fall off one of the lock walls and injure his shoulder.  The staff in the CRT base there were wonderful – ferried them to Warwick hospital, looked after the dog etc.  Now the couple was creeping back to base.  The woman has been living on a widebeam near Lincoln, but they want to get a narrowboat instead so they could explore the rest of the network; I hope this hasn’t put them off.

The house at the lock – the one with the mirrored windows - has just changed hands.  Apparently it takes a bit of getting used to seeing the passers-by staring in, although they can’t see anything except reflections.  But at night it’s a different matter, as the reflective effect disappears when the lights are on inside.  The new owner’s little nephews were visiting with their Dad, and the boys were thrilled to help with the next lock, though they had to pick their way through the mud to get to it.  The sunny morning had brought out the weekend walkers and cyclists but they all had to contend with the soggy squelchy ground underfoot.  At least the boggy conditions keep most of the speed merchants away.  We moored at Lowsonford for the night.  It was cold and grey so the fire was soon lit.