Considering the buffeting the boat was getting from the wind, we slept surprisingly well.  At least, until 5 am when Dave looked out of the porthole to see we’d changed sides in the night …..  we secured the boat (to the lock mooring) and went back to bed, deciding to work out what had happened in the morning.  It was highly unlikely anyone bothered to lift the ropes over the bollards in last night’s weather – we’ll have to be more careful tying up in future.  Two boats had arrived yesterday afternoon, mooring above the lock, so we waited for them to come down before going up the “Highest Broad Lock in England”, where a CRT gang was re-siting the setts where you brace your feet to push the gate -  when the Rochdale was restored a lot of them were put in the wrong place and they have about 100 to reposition on the Rochdale and Ashton canals. 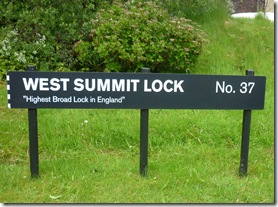 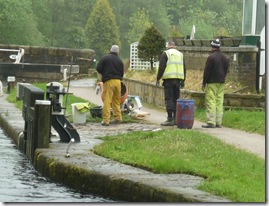 We crossed the summit in thick drizzle to the other “highest broad lock” – there have to be two of course!  I wish we could have seen more of the scenery though. 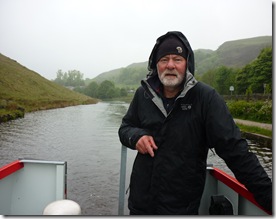 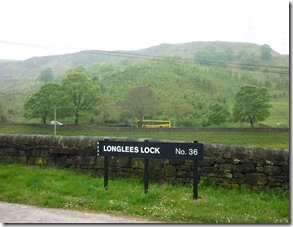 The drizzle got lighter as we went lower down.  The county boundary is between Warland Gate swing bridge and the lock.  In spite of the dampness we enjoyed the wild scenery. 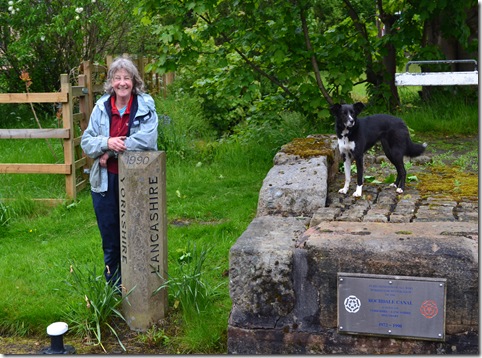 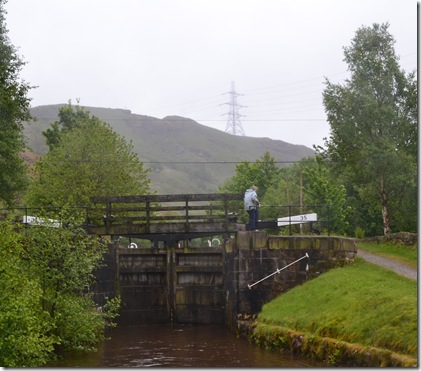 At lock 34 there was a magnificent bank of bluebells.  I’ll have to get some software to tweak the colours. 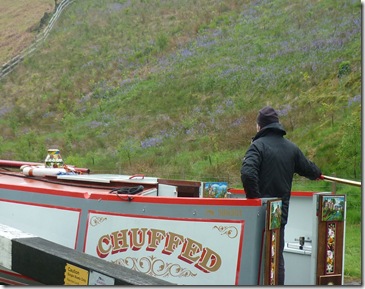 The lower we got, the more water was coming over the top gates, and the bywashes, which go under the towpath, had burst their manhole covers.  When I arrived to open up, the cover on this one had been blown aside and the water was gushing up to knee height.  I should have taken my photo earlier! 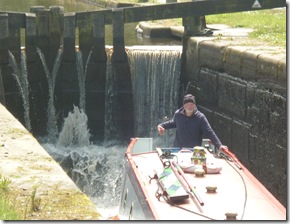 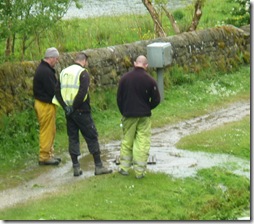 There was a lot of water on the towpath and at one point I could only just get through on the bike without having to put a foot down.  We met a couple of boats coming up – the second was unable to open the bottom gates at lock 30 as so much water was flooding over the top gate, so they filled the lock back up for us and fortunately, once we had emptied it, that was enough adjustment of levels for us to get out and them to get in.  We managed to moor below lock 27 at Walsden for fish and chips at Grandma Pollard’s.  Yummy!  it was after the main lunchtime rush so we got a lovely table in the bus and could watch the rain from warmth and comfort. I was so hungry I’d started to eat before I remembered to take a photo. 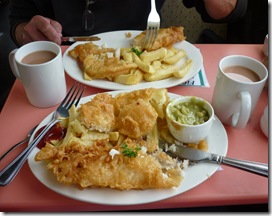 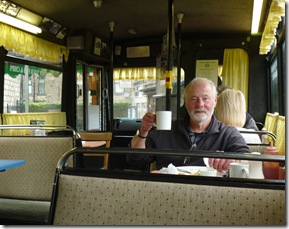 By the time we set off again the showers had ceased and, the strong wind aside, we had a pleasant trip down to Todmorden.  Several of the locks on this side of the summit have massive bracing beams below the bottom gates, presumably to prevent the gates from giving way under the pressure of water? 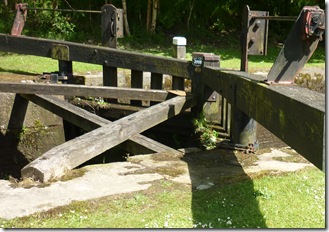 There are some sights to be seen – this is Gauxholme Arch railway bridge below lock 24, Gauxholme Highest.  Very grand!  After a few more locks was the Great Wall of Tod, which is the retaining wall for the railway line at Todmorden. 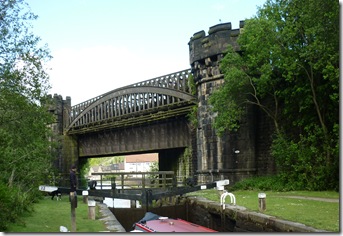 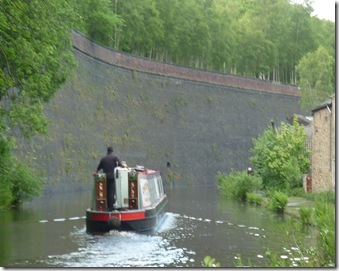 There was still a great deal of water coming down.   I had to help a boat up Gauxholme Middle Lock – he was single-handing – and it took two of us to open the bottom gate against the flow coming over the top gates.  And all the while the wind was howling down the valley behind us, making life difficult for Dave at the helm.  The water has been following us down and the towpath was flooded in several places.  At the last lock of the day, Todmorden (or Library) lock, there was a huge amount coming over the top gates.  Dave kept the stern well clear of that! 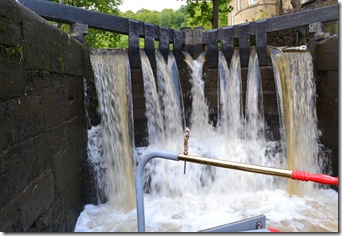 This was the first time we had used a lock with a guillotine bottom gate.  There was a notice warning that opening may be delayed if water flow is high, but the paddles were clearly big enough to allow the water levels to equalise without too much of a hold-up. 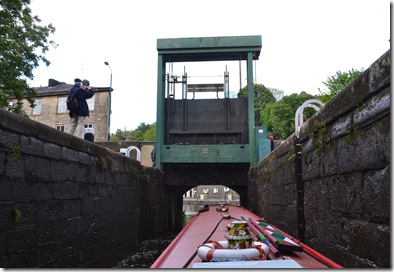 We moored next to the service block and I just had time to remove the large amounts of goose poo from my boots and the outside mats before the heavens opened and we were treated to a hailstorm.

We spent a pleasant hour with a pint by the fire in the Golden Lion before returning to Chuffed for the pies we bought at Grandma Pollard’s.  Not a healthy eating day today!

We passed six boats today if you include the hire boat from Sowerby Bridge which arrived tonight at 9 o’clock.  Nice to see other boaters again!