A steep climb to Heptonstall … but at least there were no locks! 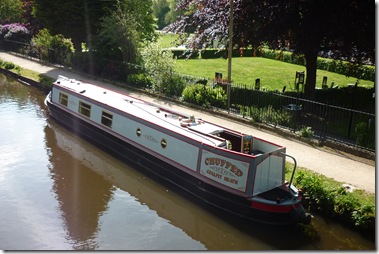 We didn’t plan on going far today so had a very relaxed start on our peaceful mooring.  I went off for a bit of shopping and Dave took Meg into the park for a run around, as we weren't sure whether she would be allowed off the lead on our planned walk.  There is a remarkable sundial in the town – is is known as the Fustian Knife. 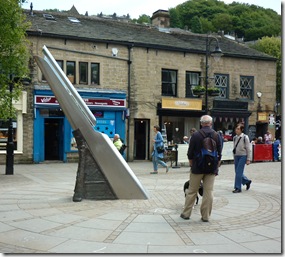 Fustian is a form of corduroy and was manufactured here.  There was some controversy when it was installed in 2008; it was called the “Faustian Knife” because Hebden Bridge was “selling its soul.”  We knew the time would be one hour out as it’s now British Summer Time, but even so the time it indicated didn’t match our watches.  This interesting site, which has more pictures, points out that Hebden Bridge is eight minutes west of Greenwich, so the time is one hour eight minutes out http://www.hebdenbridge.co.uk/news/news08/63.html.

We wanted to visit the village of Heptonstall, where the poet Sylvia Plath is buried.  The walking route starts up the Buttress, a steep cobbled lane, before crossing a road and going up a footpath to the road to the village.  Here is Meg wondering why we are not running up that hill ….. 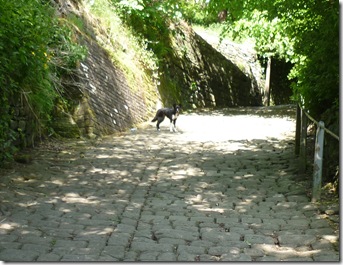 and Dave taking it at a more measured pace! 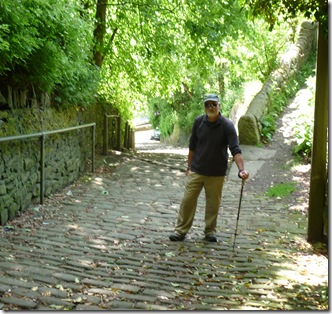 The incline is 1 in 3 in places, and there is an annual hill climb for cyclists known as “Up the Buttress”.  This is one of many videos which show just what hard work it is!   At the top we walked a short way along a road to join a footpath which is a series of steep steps with slopes between.  As compensation for the effort, the views are stunning.  You can see the road we had just crossed near the bottom of this picture. 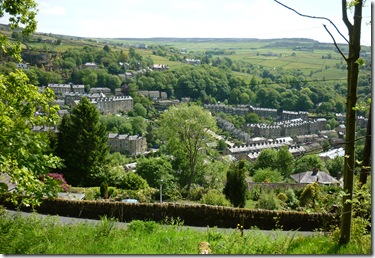 Finally we reached Heptonstall, which was quiet – there is a coach park but coaches clearly don’t come this early!  The village is very pretty even though it was dustbin day, with the cottages well kept beside the steep cobbled lane. I’m not sure how many are actually lived in permanently, though there were several local people about. 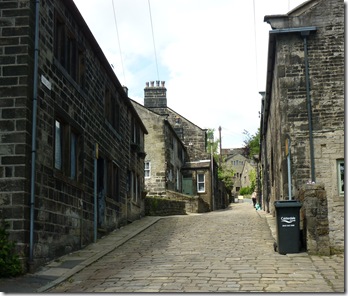 The church was easily found.  The original building was badly damaged in a storm in 1847, and was left as a ruin when the new church was built not far away. 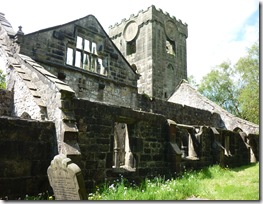 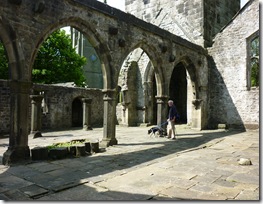 At the tower end of the new church is the pinnacle which was felled by a lightning strike in 1875.  The replacement has a lighting conductor on it! 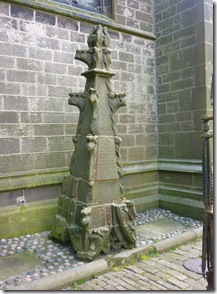 We found Sylvia Plath’s grave with the help of a local lady, who was very apologetic that it was so overgrown.  So we helped her clear some of the weeds to reveal some ornamentals that had been planted. 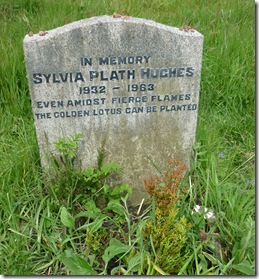 She was married to Ted Hughes, the Poet Laureate, and you can see that his surname looks fainter – apparently it is scratched out now and then as some of Plath’s fans hold him responsible for her suicide.  During the summer they get a lot of American visitors (SP was American) who leave little notes and tributes of pens and pencils. 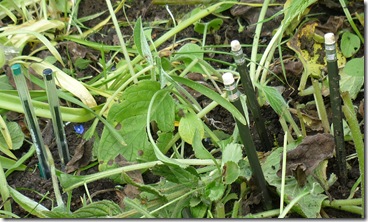 The other gravestone of note is that of David Hartley, the leader of the Cragg Vale Coiners, who, in the 18th century, clipped the edges of gold coins, returned them to circulation and then made counterfeits with the gold they had removed.  According to the information board they were so successful they almost destabilised the economy.  They were caught eventually and Hartley was hanged in 1770.  Most of the old gravestones have been laid flat (well, flattish) between the ruin and the new church. 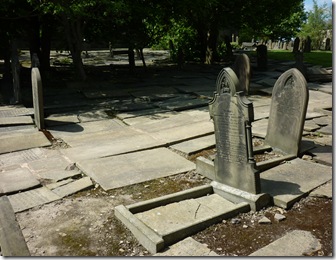 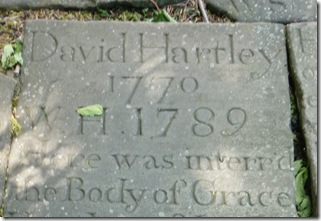 Hartley’s is a large gravestone with many names (and more details) of the more respectable members of the family.

We walked back down to the town – the way really is very steep!  and had lunch on the boat. 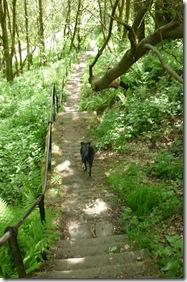 We didn’t go far this afternoon.  The views opened out as we passed through Mytholmroyd, the birthplace of Ted Hughes.  The route of the Tour de Yorkshire (major bike race) passed through on the road close to the towpath this year.  Nicholson’s says there is a sculpture of an ape at lock 7, but it’s a funny looking ape! 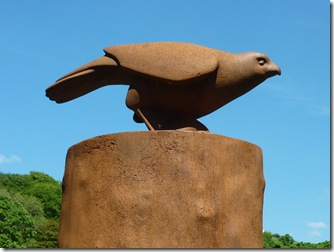 We didn’t want to go all the way to Sowerby Bridge, so moored up on the stretch below lock 7 – unfortunately with quite a wide concrete shelf, so a bit of a step to the bank, but with few boats on the move it didn’t bother us.  This interesting tree trunk was opposite – well I can see a deer’s head in it anyway. 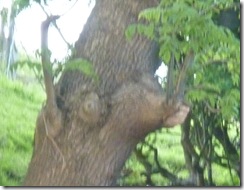