A lovely cruise to Hebden Bridge

Not so many locks today so we had a relaxed start. 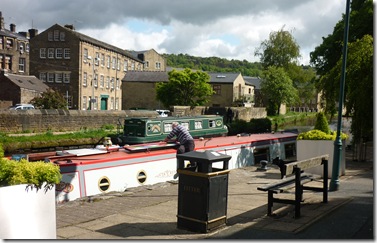 We lent our hose to a hire boat which arrived early, whose own didn’t quite reach the tap.  They had run out of water and didn’t even know what the tap looked like, or how to unlock the cover.  Their steering and boat handling tuition had clearly been thorough though – for first-timers getting into a space of a single boat length they were very professional and when they passed us a couple of days later while we were moored up their speed was exemplary.  All women, I was pleased to note!   At the service point is a large artwork of metallic fish and weeds on the gabion retaining wall. 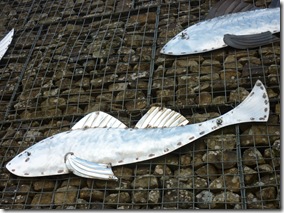 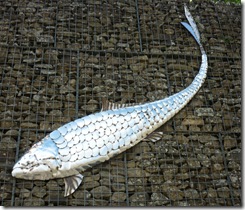 Todmorden was interesting with a good range of shops.  The public buildings in the north are wonderful, much more impressive than we’ve seen down south.  This is the Town Hall. 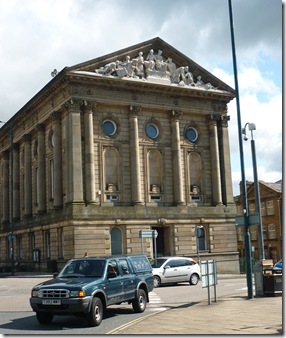 When we set off at 10.30 it was still cold enough to need woolly hats, but once down Old Royd lock we were sheltered from the wind and it was sunny and warm.  This side of the summit the locks are further apart, and we saw more boats on the move, with several hire boats from Sowerby Bridge and even a day-boat, as well as long-term moorings.  It’s much more like the canals we are used to apart from the landscape!  The land around is still steep, well wooded in parts, and with some glorious views.  This is Old Royd lock.  ‘Royd’ appears in many personal and place names in Yorkshire and appears to be an Old English word meaning ‘a clearing in a forest’. 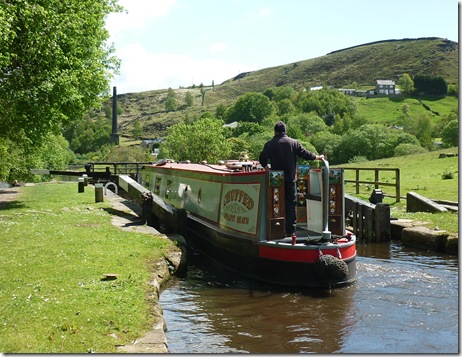 As on the western side, the canal is still accompanied by road and railway; the valley will have been the main route across the Pennines for centuries.  This is the road and the railway viaduct at Lobb Mill lock. 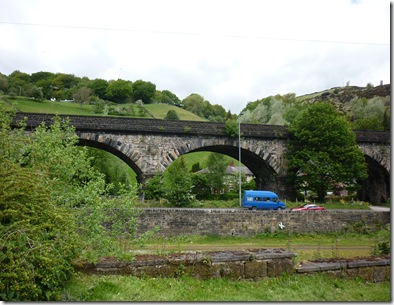 We saw several signs on the balance beams.  One was rather sad; 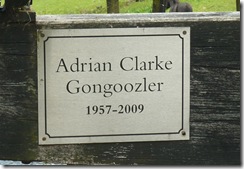 but another rather annoying.  Why do they APOLOGIZE for asking boaters to close gates? 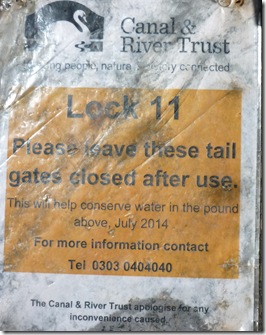 As before, we had snacks and plenty of squash to keep us going over lunchtime as it wasn’t worth trying to moor up for a short time.  We didn’t have any trouble with water depth for cruising  but the sides were shallow.  The approach to Hebden Bridge was attractive, though I don’t suppose it was so clear when the chimney was in use … 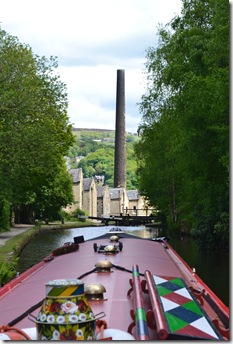 We moored at the first rings we came to after lock 9, at about 3 pm.  This turned out to be the best spot – good for access to the town and the park, but shielded from road noise by the Picture House cinema.  We had a rather belated lunch, then went for a stroll round town before taking Meg into the lovely park for a game of ball. 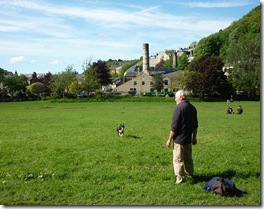 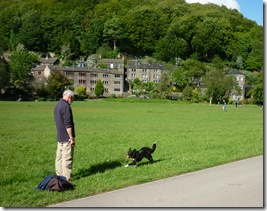 It made a nice change for me to ride on the boat inside of pedalling back and forth all the time.  Dave has pulled a muscle in his shoulder, which means he can’t wield a windlass or use the lock ladders so I was relieved it was only 10 locks today.

We walked back into town to find somewhere to eat as we didn’t fancy the film the Picture House was showing.  We went to the White Lion where we had excellent beer and a lovely meal.