Narrow locks at last, but the bottom of the canal was too close to the top ….

We hadn’t booked our passage through the Standedge Tunnel before today as we weren’t sure how long it would take us to get this far.  We didn’t want to leave Huddersfield until we’d got our slot sorted, and if we couldn’t go through till Friday we would have stayed put for another day.  But Wednesday it is!  After pausing at the service block to empty a cassette and dispose of rubbish, we were off.  Having read other boaters’ accounts of cruising the Huddersfield Narrow, we were a bit concerned about water levels in the canal, so held back on filling the water tank – wisely as it turned out!

Through the narrow bridge we went and past a canalside crane to the first of the locks on the Huddersfield Narrow Canal. 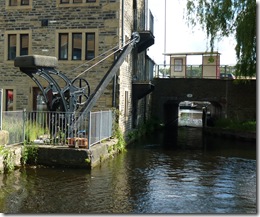 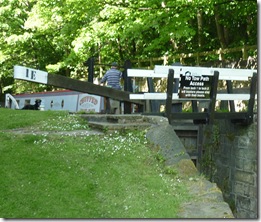 The notice warns that there’s no towpath access between the first two locks.  The canal runs between a high wall and the university buildings before disappearing into a tunnel through a very narrow channel. 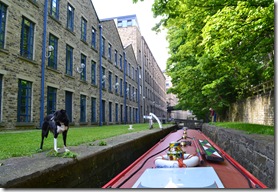 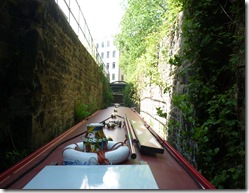 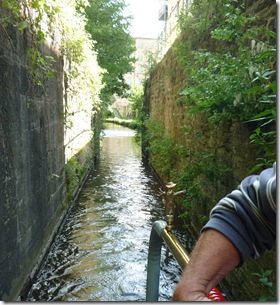 Dave's shoulder is better now and he was relieved to have a change from just steering.  Here he is at lock 2. 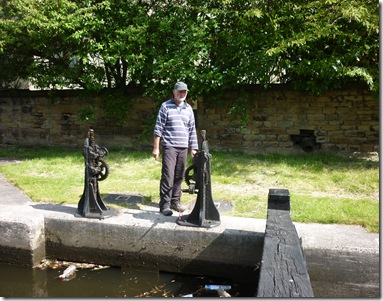 But once we’d reached lock 4 it was clear that I’d have to stay off the boat as the next pound was very low.  Dave crept along the very centre of the channel, scraping the bottom all the way, till he came to a standstill on the approach to the lock.  I carefully ran some water through in stages until he was afloat again; I didn’t want to let a lot through in case it caused problems further up. 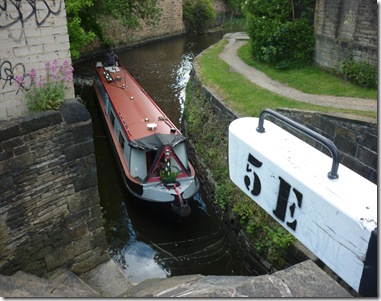 Just as well.  It was very slow going all the way to lock 11 and I had to let water down several times.  Some locks were leaky which had compounded the problem.  Lock 9E is one of the locks (like Hillmorton on the North Oxford) with lines of poetry carved into the balance beams. 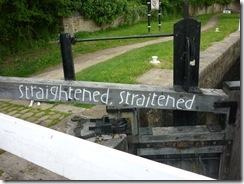 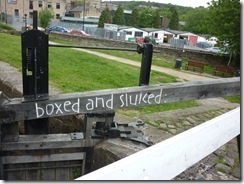 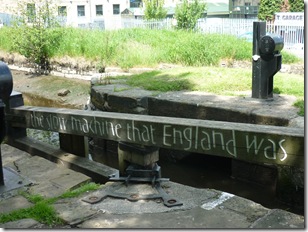 The words on the top gate are obscured by the paddle gear whether the gate is open or closed.  It reads ‘the slow machine that England was’.  Well, Chuffed was a pretty slow machine this morning!  The pictures show the water level in the pound above the lock, and you can see the boat is sitting a couple of feet lower than she should have been.  Dave had to be very patient. 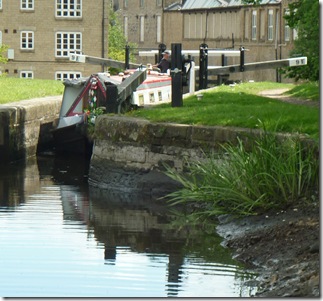 Short pounds like these are often prone to low water levels, but at least it means that it’s not far for the crew to go to let some water down.  But by the time we’d gone up lock 11 the water levels were fine.  When we met the boats that came up later in the day, they hadn’t had a problem with water levels, so our travails must have sorted the issue for everyone else!  Here is Dave ditch-crawling along the last low pound from lock 10. 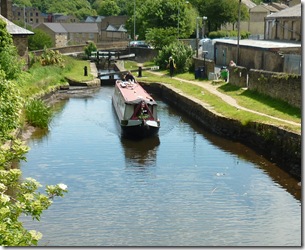 Now the towpath became busier with dog-walkers and there were more trees.  The higher parts of the town had attractive cottages and old mills and there were occasional glimpses of an impressive railway viaduct.  It began to feel quite rural, though you could often hear – or smell – the factories behind the trees. I’m sure it would be a lot less pretty in winter with the leaves off the trees.  Golcar aqueduct was very awkward, with a 90 degree turn at each end, like the Avoncliff on the Kennet and Avon.  But that’s a broad canal.  For those not familiar with narrowboat steering, you need to appreciate that aqueducts on narrow canals are often no wider than locks, and until the stern has left it completely you can’t change the direction of the bow even if there is a sharp bend ahead with trees growing out over the canal – so we couldn’t avoid getting swept by the branches.  We are only 55’ - a longer boat would have had a lot more trouble.

As we approached lock 13E we passed the site of the breach which closed this part of the canal a couple of weeks ago.  There was apparently a hole big enough for two men to get in. It has been patched up and will be properly repaired during the winter. 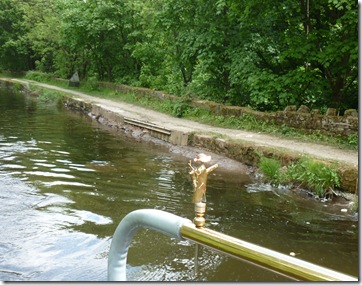 If you can avoid looking at the factories, which is often possible, this part of the canal is beautiful.  The Colne flows along behind the wall on the towpath side. 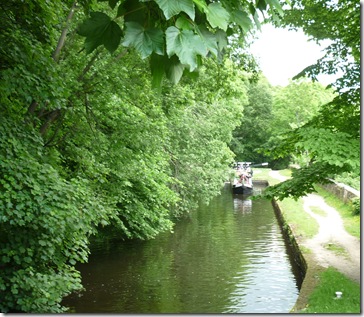 As we approached Linthwaite we caught sight of a huge mill across a wide flat meadow.  A passing walker told us that it had been derelict for years but had recently been renovated.  It now houses apartments and has a spa and gym on the ground floor.  It was called ‘Titanic Mill’ as it was built in the year of that ill-fated maiden voyage. 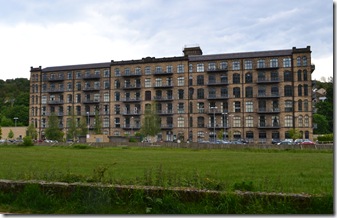 It had been clouding up for some time and came on to rain as we approached Slaithwaite, our planned mooring spot.  The visitor moorings are above lock 21E, not below as indicated in Nicholson’s.  We just had time to do a bit of shopping before the shops closed, finally finding a bucket with a lid, which we need for the stern deck.

We’ve seen a lot of wonderful old buildings this trip; lovely stone cottages and bridges, and the new housing mostly seems to be built of, or at least clad in, local stone.  The old mills, often 6 storeys high, have not been demolished out of hand and look impressive converted to offices or flats.  We just don’t seem to have anything like that down south.  Maybe stone lasts better than brick.

Two boats arrived during the evening, the only ones we have seen on the move today.  They are both booked in for the tunnel on Wednesday, so we will see them again.