The last non-leisure use of the Exeter Ship Canal that I know of was in 2013, when it was used during the construction of Clyst Bridge on the Exe Estuary Cycleway.  This atmospheric picture, showing a bridge section being transported down the canal, was taken by Hugh Griffith for Devon County Council (permission obtained). 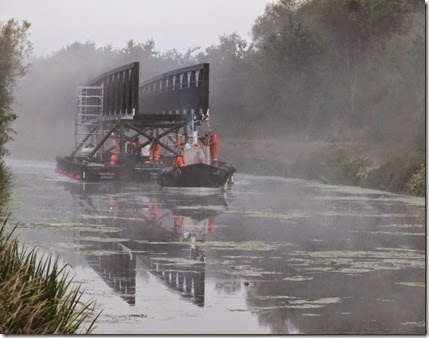 The cycleway, part of national cycle route number 2, runs from Exmouth along the eastern side of the estuary to Topsham, where the River Clyst, a tributary of the Exe, causes a detour along several roads to Countess Wear, where the route joins the west side of the canal and turns back towards the sea as I described in my last post.  It is a shared use trail, popular with walkers, runners, birdwatchers, mobility scooter users – oh, and rather a lot of cyclists too.  I took my pictures on a cold March Thursday morning, and there was plenty of traffic. 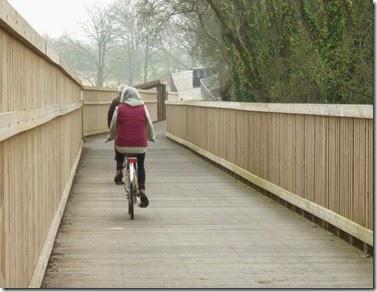 Clyst Bridge (above), which cost £2.6m to build, enables walkers and cyclists to get to Topsham and beyond avoiding the busy road along the Clyst valley.  It is approached from the Topsham end by 225 metres of elevated ramp and boardwalk across the reserve, and has a 120 metre span across the river.  As shown in the photo above, the sides of the boardwalk and bridge have high fences on the left (upstream) side because the bridge crosses the RSPB Goosemoor wetland reserve, a very important area for wintering birds. The construction work was severely constrained by its location and work had to cease between September and April in 2012 and 2013 to minimise disturbance. 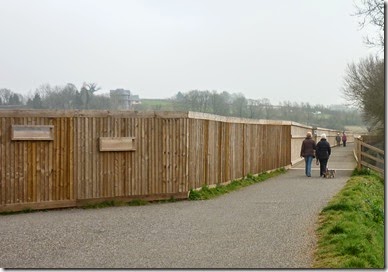 There are plenty of slots cut into the sides for birdwatchers and those who want to see the view as you can see above.  I took the picture below through one of them; the white dot just below the centre is a little egret.  I’ve already cropped the picture and it’s the best my little camera can do! 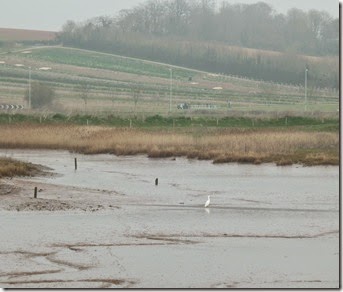 On the section over the water the fence has narrow gaps between the uprights, and if you cycle you can’t see much.  But if you park your bike, you can see upriver towards Odham’s Wharf, where there are several businesses including Tremlett Powerboats. 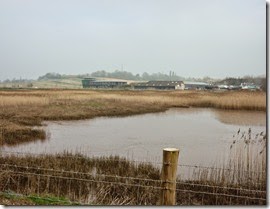 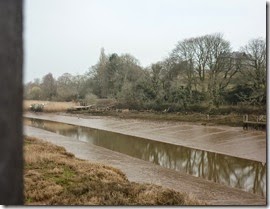 There were complaints that cyclists couldn’t see the view as they crossed, but we can’t let them have everything their own way, can we? 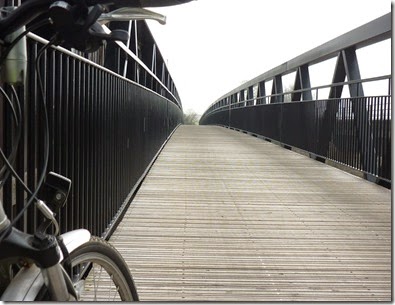 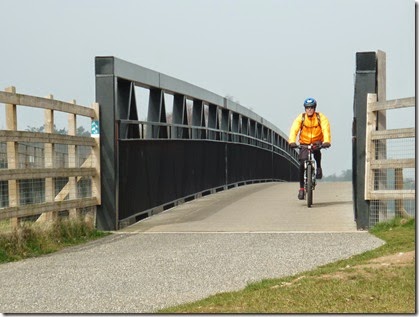 There isn’t much of a view downstream either, as the railway is in the way, either above the trail or crossing on its own bridge! 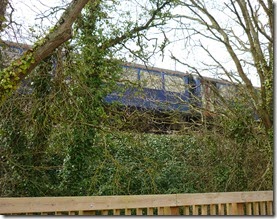 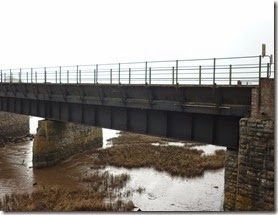 The canal interest involves the bridge sections, which were manufactured in Nottingham and transported in 6 parts down the M5 to the canal basin in Exeter.  They were then bolted into three sections, lifted onto pontoons and taken down the canal to Turf Lock.  At high tide they were taken down the lock to the Exe and downstream to the confluence with the Clyst before being pushed along the Clyst to the construction site.  The sections, each weighing 33 tonnes, were lifted into place by a specially-designed hydraulic lifter, as shown in this time-lapse video; https://www.youtube.com/watch?feature=player_embedded&v=fNACdTGoOeI

As the Clyst is navigable at high tide, the bridge piers have to be resistant to boat impact.  There are some large vessels moored upstream.  This is Pieter, looking rather smart; 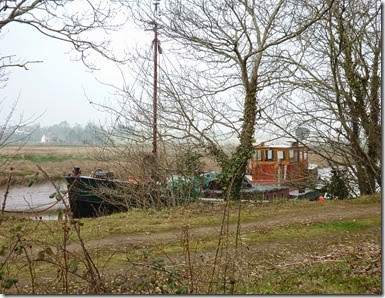 but I’m not sure this one has been out to sea for a few years ….  The bridge can be seen in the distance. 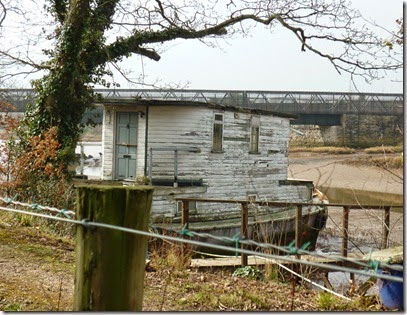 The website where I found the video is https://www.cycledevon.info/cycle-routes/cycling-infrastructure/, which has more information about cycle path construction in Devon.  Another video shows how a smaller bridge was built further up the valley, using cranes this time, to enable pedestrians and cyclists to avoid a dangerously narrow road bridge.  The video was taken from the excellent Bridge pub, the first pub ever to have been visited (in 1998) by the Queen.