A Banksy at Hawkesbury junction?

Although it was cold in the wind, the sun shone most of the day and we missed the heavy showers forecast.  It was quiet as we dropped the few inches to leave the Oxford Canal. 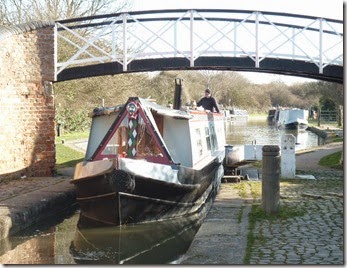 As we joined the Coventry, we spotted this lovely little artwork under the bridge – how long has that been there?  Not really Banksy’s style though. 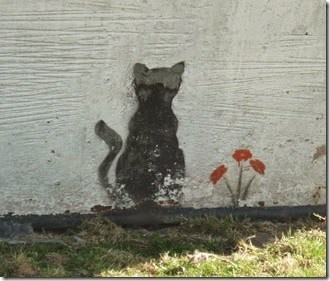 When we passed the moorings to the north of the junction we were glad we had moored on the Oxford side – heaps of ash, piles of dog poo and further up the brambles were full of rubbish.  Horrible.  We were glad to get past Bedworth, where the trees kept us in the chilly shade.  We were glared at by this chap in a garden on the edge of Bedworth. 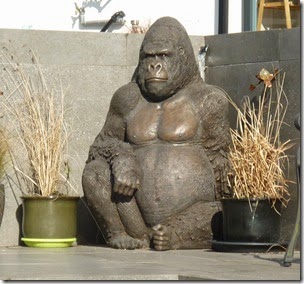 At Charity Dock most of the figures were tucked away somewhere for the winter – just the disembodied legs and the petrol pump figure to be seen.  Before we reached Marston Junction we were astonished to see a group of four workers in high-viz on the towpath.  Three were strimming grass that looked as though it had just been mown.  If you think that is a waste of our money, what about this – the fourth guy had a leaf-blower so the narrow earth path, out in the country as it was, wouldn’t be sullied by the few grass cuttings generated by the strimmers.  I think we will write and grumble about the waste of money. (Writing on Thursday – we spoke to a CC-er today who said CRT are prevented by law from letting grass cuttings go in the canal.  But a leaf blower?) 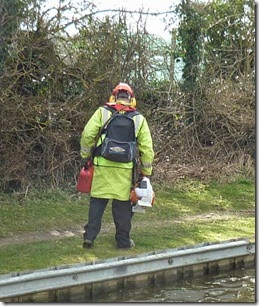 We passed Marston junction and just round the bend was moored Scrumpy Jack with a most unusual tiller arm.  Well, we are approaching the Land of Allotments, so I suppose it’s appropriate! 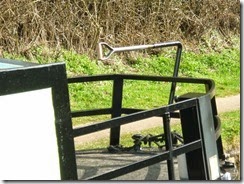 As we approached the outskirts of Nuneaton we had our exciting moment for the day – Diane and Raymond on NB Ferndale passed us and shouted that they read our blog!  Nice to see you – I will add you to our blog list!  We had to stop at Nuneaton as we had no bread for lunch. There were plenty of shoppers but still no decent baker.  I won’t add more to what Maffi and NB Ferndale have said in the last few days about the general grim scruffiness of the canal here, except to ask – if the Carling drinkers can take so much trouble to thread their cans onto railings and branches, why can’t they take them home or bin them?  Louts.  On the way out we actually saw two guys litter-picking.  It must be a thankless task round here. 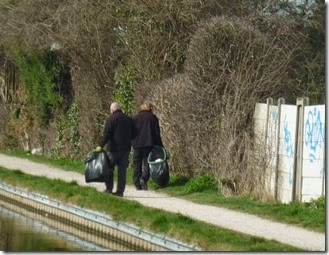 We arrived at the moorings before Anchor Bridge mid-afternoon, and once more could pick our spot.  We prefer to be a couple of hundred yards before the old railway bridge, to avoid the worst of the noise from the road.  Doesn’t help with the quarry noise though. 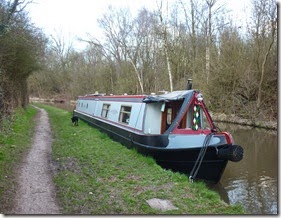 We went straight off for our usual walk here, down to Springwood Haven and off to the left to go down under the railway, past the riding stables and into the fields, where we were joined by a local terrier who kept us company over the river bridge, over the railway and almost back to the boat before she thought perhaps it was nearly tea-time and trotted off back home.  Meg totally ignored her.

8 miles and the stop lock.