We arrived at Calcutt in the last of the sunshine on Saturday, car crammed to the gunwales with all the stuff we’d taken home after our last cruise,such as the bedding and most of the kitchen contents.  We wanted to get going rather than hang about in the marina, so it was a quick ‘bye’ to our cosy winter berth and the marina - 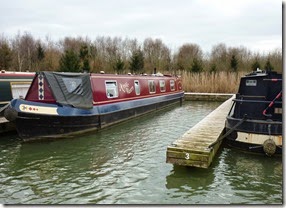 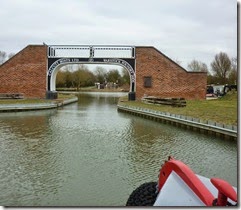 and straight up the locks, all in our favour!  A bit of a mad hair day for me today as I use my lovely new windlass for the first time. 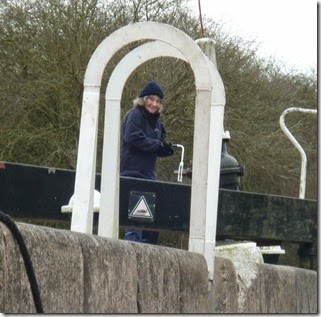 We rounded the junction into the caress of the lazy wind – the sort that goes right through you because it can’t be bothered to go round you.  We pulled in near Flecknoe, chilled to the bone as we hadn’t bothered to put our thermals on for ‘just an hour or so’!  but the fire soon was soon lit for a cosy first night aboard.

On Sunday we were woken at 6 by a flight of geese, then again at 7.30 by two boats passing, in opposite directions.  So we were up early, and when I took Meg for a short walk I discovered first our old share boat nb Padworth – curtains firmly closed so I didn’t call! 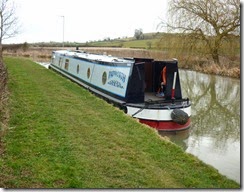 and then a patch of violets.  Not a fantastic photo on my camera but good enough to see them. 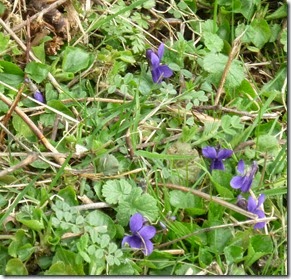 We were away soon after 9 as we wanted to stop at Braunston.  It was cold but there was enough blue sky to make a pair of sailor’s trousers (as my grandma used to say), so we knew the sun would soon be out. 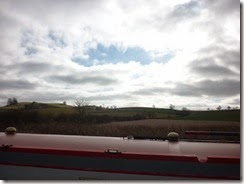 Bridge 102, which was surrounded by scaffolding and crawling with workmen when we came through in the autumn, is now finished with a new parapet on the south side. 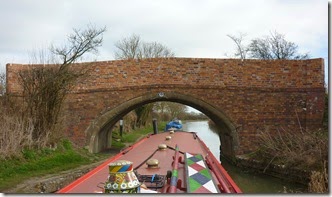 We passed the permanent moorings on the way to the Puddle Banks and noticed the sinking boat getting ever lower in the water, although a smart pair of new batteries was sitting on the bank by the bow (hidden here by the grass), so perhaps someone is going to have a go at renovation? 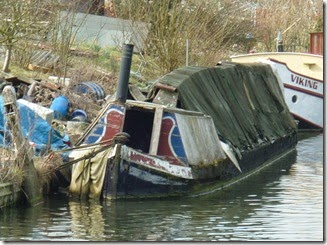 We moored just past the junction and I peeled off my thermals before hot-footing it up to the church to join the bellringers for the Sunday service while Dave took a more leisurely stroll with Meg to get the paper and some Braunston Bangers before coming back to read the paper in the sunshine.  We had lunch as soon as I got back from church and by 1.30 were shuffling across to the facilities to dump some rubbish before setting off for Hillmorton.  One of the water points has an ‘Out of Order’ notice on it and is fenced off, along with the quagmire around it, while the other has a bit of old pallet to keep users’ feet out of the mud.  But we didn’t need water, so off we went. 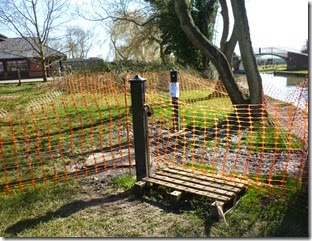 We had an easy descent at Hillmorton, with two families eager to help with the gates, and moored in the sunshine just round the bend past the bottom lock.  I left Dave investigating a leak from one of the radiators and took Meg off towards Rugby for a run.  All went well till she vanished through a gap in the hedge onto the golf course.  She had found a stick and a golfer willing to throw it.  She is deaf to all calls once she has a stick or ball and I had to run over to get her back.  He thought it was hilarious but I was rather embarrassed – we don’t throw sticks for her, because she has cut her mouth before and we know of two dogs which needed surgery after chasing sticks.

It got cold very quickly after five o’clock and we were soon tucked up inside by the fire.  There was a beautiful sunset after a lovely sunny day.