Another failed early start – this time we overslept as the mooring was so quiet.  We went up to the shops for supplies and bought a couple of pie dishes in the kitchen shop and didn’t leave the mooring till nearly 11.  At the swing bridge two Slovakian ladies were snapping away, excited to see the bridge in action.  This is my effort; 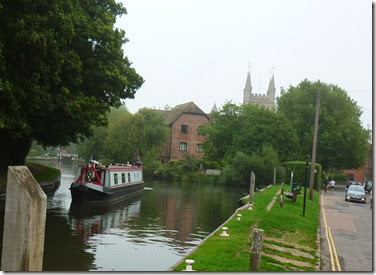 As we passed the West Mills moorings, nb Laughing Dog slipped her moorings and joined us in the first lock.  With two crew we made good progress, with one or other of us going ahead to prepare the locks until Kintbury where they went on while we stopped for a belated lunch.  Earlier this morning we spotted this unusual boat for sale; the front is carved and apart from the hull the rest appears to be wood panels. 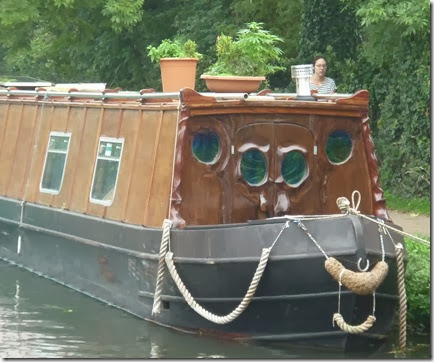 Apart from the bottom gates at Drewett’s Lock, which both needed 2 people to close them, the paddle gear and gates were easy to use, and the top paddles are less fierce than yesterday’s.  Laughing Dog had two beautiful dogs – a collie who nimbly crosses the lock gates and did a lot of stick chasing, and a beautiful lurcher who was kept on the lead as he has a tendency to go hunting the muntjac deer which are common hereabouts.  This photo unfortunately doesn’t show the dogs - 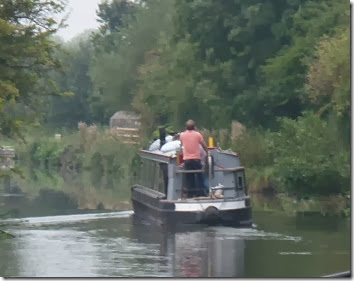 Before they left us at Kintbury we had swapped some apples (from our garden) for a couple of chillies (from the top of her boat).

Dave walked into the village to visit the bakery but unfortunately was too late – it only opens on Wednesday and Saturday mornings – but got some sausage rolls from the butcher.  While we were having lunch the horseboat came through, but as the guy with the horse prepared to lift the rope above the moored boats the horse decided to misbehave so the helmsman released the rope to prevent accidents and had to continue to the lock with the help of a pole.  Here he is fetching the pole as the Kennet Valley slowly drifts to a halt. 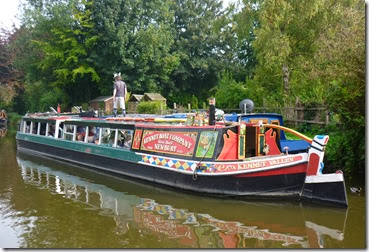 After disposing of rubbish and emptying a cassette we set off again, passing several boats coming down – more boats on the move today.  Our last lock of the day was Dunmill, which has old-fashioned signs  directing crew over the bridge to operate the lock; 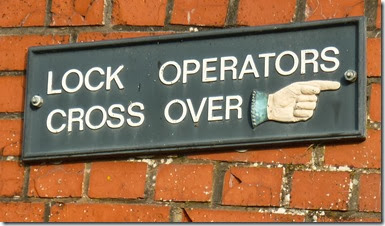 As we came under Hungerford Bridge and debated whether to moor before or after the lock the decision was made for us by the Morse control jamming.  Dave managed to get us into a mooring and investigated while I got the mop and bucket to clean the outside of the boat – not only were we moored under a tree last night, but the tree also had roosting birds which had been eating ripe elderberries – a bit of a mess!  Dave has applied grease and WD40 where appropriate and we’ll see how we fare going up the lock tomorrow.

This evening, as the rain started, we walked up into the town and had a delicious meal with excellent beer at the Plume of Feathers.