and now to Oxford for a couple of days ….

An excellent start to the day – Dave spotted a kingfisher fishing from the mooring rope of nb Faith moored opposite!  He took a couple of photos before ‘Dusty’ the coal boat came along and it zipped off. 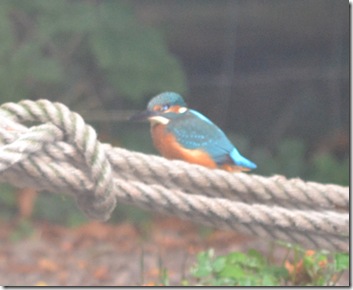 We stopped first at the Thrupp services for the usual cassette and rubbish disposal, and had a chat to Maffi (http://narrowboater.blogspot.co.uk/) while we waited for the water tank to fill.  Nice to meet you Maffi!  and also to use facilities which are kept in such a good condition, unlike some we have seen recently.

As I went up to open the lift bridge, a nervous couple approached to see how it worked, not having been this way before.  Not sure why they were so apprehensive – they have come up from the K and A and that seems to have its fair share of scary bridges!  It seemed sensible to let them through, then another boat appeared behind us so we waved them through too.  Maffi found this most amusing - I just hope it’s banking some good karma!

There were 3 manually operated lift bridges on the way to Oxford; you have to unlock them with the BW key then just use the chain for opening and closing.  They are quite heavy to close and lock for a lightweight like me, but the hard bit was unlocking – you follow the instruction to turn the key clockwise one turn, but you actually had to go anti-clockwise on two of them – someone had helpfully engraved this on the first.  Here is one of them – looks like a lovely quiet spot …… 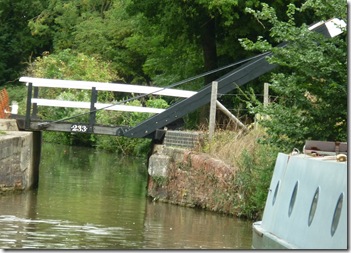 right under the A34. 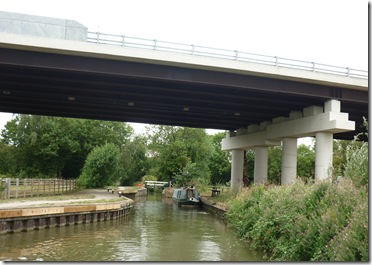 At Duke’s Lock above Duke’s Cut we met a cyclist who was riding one of the cycle routes across the country.  Having done Route 4 (which goes along the K and A) last year, he is now on his way to Holyhead along Route 5 – camping along the way, so he has got good weather for it!  You can just see him in this shot of Duke’s lock; 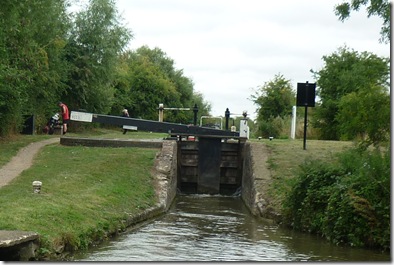 Here is the entrance to Duke’s Cut with the second lock; 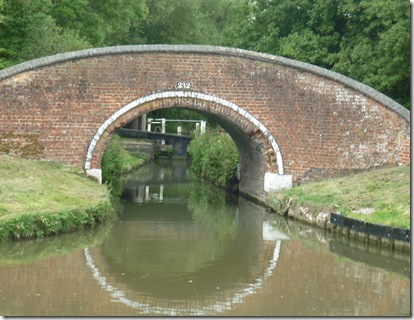 The approach to Oxford was more rural than we expected with some colourful bankside flowers such as this purple loosestrife; 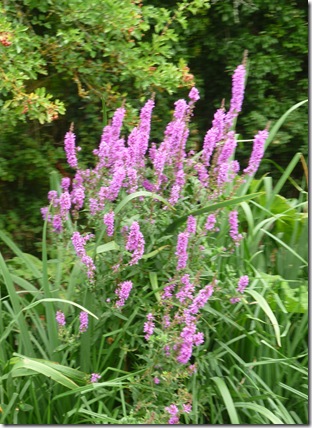 We had a brief stop at Aristotle Bridge while Dave cycled down to recce the moorings.  The last spot on the little cut at the end was just being taken, so we moored just past College Cruisers opposite the back of St Barnabas’ church.  Its clock chimed the hours rather pleasantly but the chimes are turned off overnight.  Wish we could say the same about the trains! 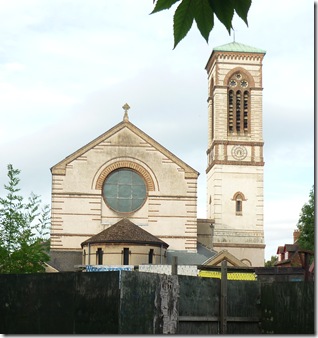 We had some lunch and headed off into the city, which we have not visited before.  We headed for the tourist information centre to buy the guide which has a useful map, and then up the Carfax Tower. We had a guess at what we saw, trying to ignore the air-con units on the roofs nearby.  We reckon this is Brasenose with its knobbly pointy bits; 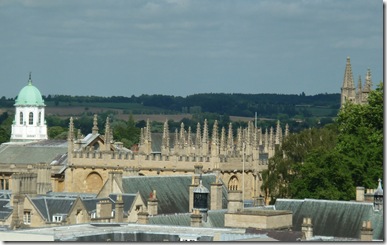 and Christchurch (shame about the clutter on the roofs in the foreground – there’s only so much you can crop); 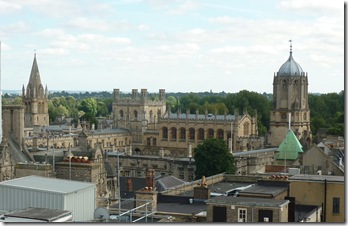 the weathervane atop the tower; 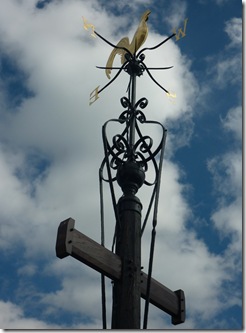 and some of the graffiti adorning the lead roof of the tower.  Most of it seemed to be by foreign visitors. 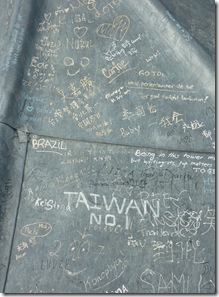 We followed part of the walking tour in the guide book to look at Christchurch college, a stroll along Christchurch Meadows, a peep through the gates at Brasenose; 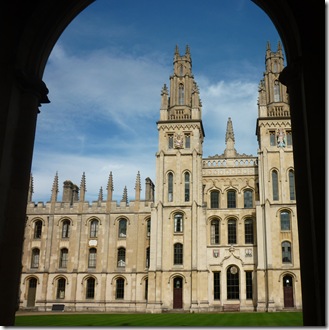 past the Radcliffe Camera (shame about the scaffolding, not to mention the missing top of the dome); 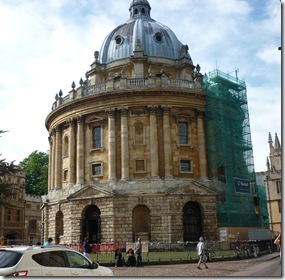 and back to the boat.  We were very tired after several early mornings and an afternoon’s walking in the hot sun so we went to the Four Candles (as we had enjoyed the Two Ronnies ‘Fork Handles’ sketch and couldn’t be bothered to go any further) for fish and chips and a pint – a cheap and cheerful Wetherspoon’s. 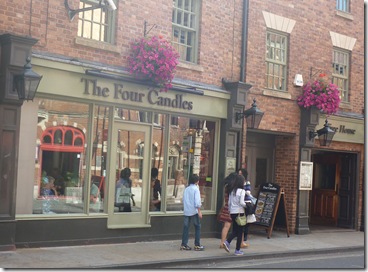 We aim to stay till Monday (got some Morse and Lewis location-spotting to do) then head off down towards Reading.