Market Harborough and back to Foxton

Monday 22nd August;  Market Harborough and back to Foxton bridge 5.

Although it rained a lot yesterday evening it was dry during the night – at least we didn’t hear anything – and dry this morning.  We set off soon after 9 making for the terminus.  There is not a great deal of mooring on the arm, as a lot of the banks are full of reeds and other water plants.  Mooring is basically round Foxton, half-way along between bridges 8 and 9, and near to Market Harborough.  On the offside seems to be a more expensive part of town – large bungalows and other properties with sweeping lawns and little else, and most hadn’t made anything of their canal-side location.  We liked this hedge though.  There was a pretty gate in the arch but it felt a bit intrusive to take a photo of their garden. 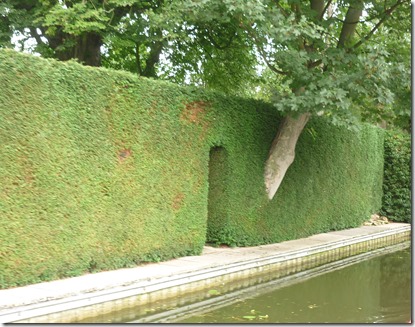 We pulled in to the basin but couldn’t get directly onto the service block as a hire-boat was being pumped out and washed and having its water tank filled.  We pulled in around the corner, which was fine as far as using the Elsan went but it was a right bu**er to get back out into the basin to turn as a strong wind was blowing.  Made it though, and we moored a little way back down the arm.  There is not a huge amount of visitor mooring – the basin pontoons have the Canaltime timeshare base and a few hireboats, so it is mostly online.  There are several water points along the towpath, and there is no restriction on mooring times so people just moor up.

We left doggie on the boat with a Bonio and walked down to Market Harborough, a town we have never visited.  Although it was slightly out of our way we went to the far corner of the basin to look at this sculpture though we are not quite sure what he is supposed to be doing.  His right arm looks a little out of proportion!  (not to mention the bit of boat). 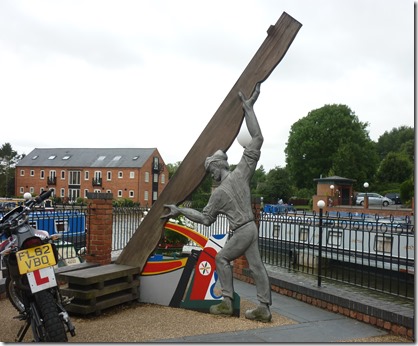 Growing in the water amongst the pontoons is Water Soldier, which is quite endangered in general but has proved to be rather a nuisance on the Grand Western Canal in Devon where there is not a lot of traffic to keep it within bounds. 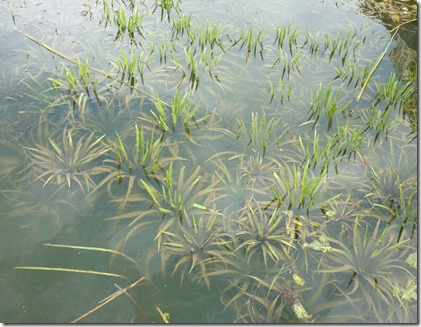 The town centre is about half a mile from the basin, and it seems to be a very pleasant place with a wide variety of shops including a large Sainsbury’s, bakers and at least one butcher.  We have bought ourselves a shopping trolley for the boat, but not having realised that there was a good supermarket we failed to take it with us!  The town has a number of interesting buildings, such as the butter market, the upstairs of which used to be the Grammar School but is now a meeting room. 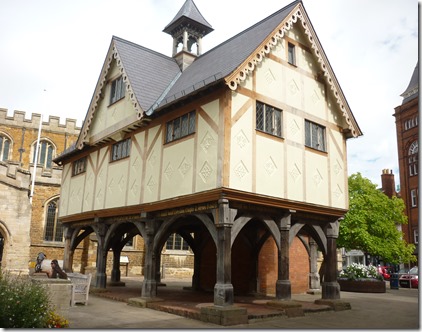 The building in the background is the church of St Dionysius, which has a sundial on the side of the tower with an interesting injunction – applicable to us all I would think though I’m not entirely sure what it means! 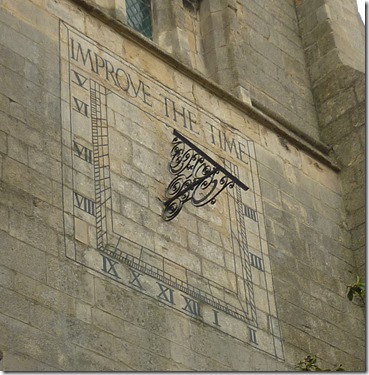 After a bit of a slog back (uphill) to the boat with our shopping we had lunch, with some very nice bread from Hambleton Bakery, topped up the water and returned down the arm.  We heard from the hireboat staff that there had been a tree down which had held up returning Canaltimes and ABC hireboats, and we saw them all come back within a short period.  We didn’t see the CRT message about the tree until we had been past it twice – the second time it was being cleared.  Ash, so some good firewood for someone. 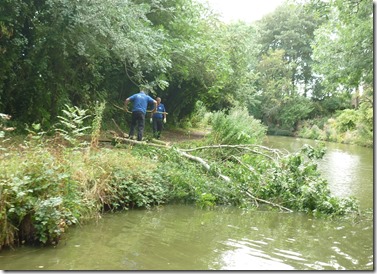 Parts of this arm reminded us of the Monty or the Droitwich canals, with narrow sections and lots of reeds.  We met this day boat in one of the reedy bits – on a bend, naturally. 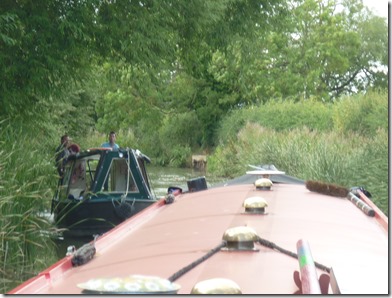 I had just taken the picture when it suddenly changed direction – the poor chap had pushed the tiller the wrong way – and clouted us.  He had the cheek to tell us we should have slowed down (we had) but he did look very embarrassed.

A little further on were some works with an interesting looking square chimney.  A recent article in Canal Boat says it is Pears’ Meat Rendering Plant and suggests it can be very smelly but it looked a bit closed down to us and no pong at all. 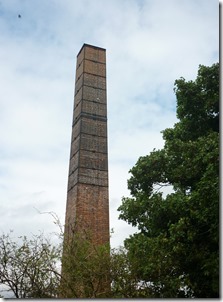 We moored for the night at Foxton between bridges 6 and 5, where there was a nicely mown edge and Armco piling.  The fields opposite had been harvested and the straw bales – the ‘Swiss roll’ type – were being collected. 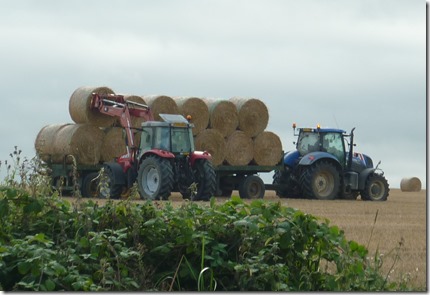 We went for a stroll with Meg down to the junction, where we sat watching a boat come through the swing bridge and Dave enjoyed an ice cream, before we returned for a quiet evening on board.