We didn’t go far to start with – just nearer to the junction as we had some cleaning to do and needed the rubbish disposal!  Dave did the brasses while I got down and dirty with a holly branch.  Actually I just cleaned the flue pipe.  I read somewhere long ago that holly was a good way to get the soot from your flue and it really works!  and no storage issues as you would have with a sooty brush.  The pictures are on my phone as my camera flash gave up the ghost some time ago.  I brought a bit of holly from home, tied a cord to it and pulled it up the flue. 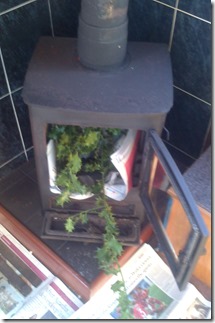 There was quite a long stem bit so I could pull/push it up and down for a bit.  Two boats went by – one made the ‘small boys’ joke and the other said, what a good idea, must try it.  Guess which was the hire boat! 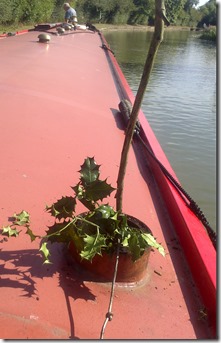 It works well and when you have done you just leave it in the hedge.  Not so the soot – wrapped in newspaper it ended up in the skip at Foxton. 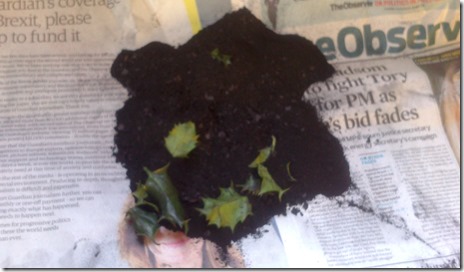 I disposed of it, along with the other rubbish and a bag of recycling, at Foxton while Dave hovered waiting for me to get back to the swing bridge.  I got a bit distracted taking a snap of the pulley wheel from the inclined plane which is now on display at the car park.  Not many people seemed to be taking an interest though – just one mum trying to interest her child. 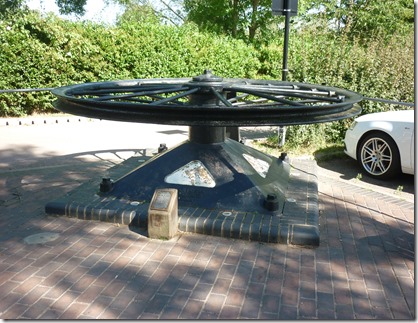 Most kids round here seem to be glued to their phones, as are a lot of the adults.  Some of them are Pokemon hunters though.  There seems to be something to be caught halfway up the flight.  (Pokemon is a vastly popular phone app game thingy which we only know about second-hand through newspaper reports and now watching people hunting invisible monsters … or something).

Anyway.  We left Foxton and its visitors behind and soon it was peaceful once more.  The canal quickly becomes rural and secluded, and very reedy in parts.  The stretch beyond Debdale marina is an SSSI. 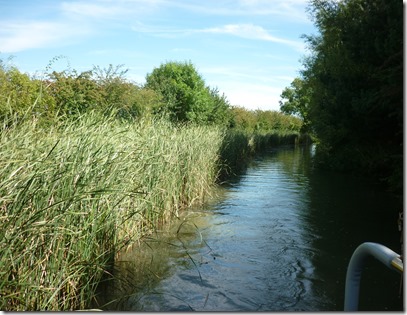 Before long we were at Saddington tunnel.  No-one was coming through so it was a quick and easy passage. 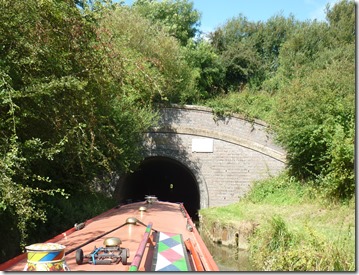 Then we were at Kibworth Top Lock, the first of the double locks of the Leicester Line. 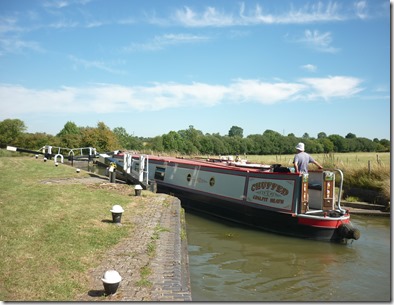 Luckily as I was about to close the gate we were joined by one of the ‘Narrow Escape’s on the network.  It was very hot and we were delighted to see them, but they were only planning on doing five locks – she had a shocking cold and was feeling rotten, while he had had a fall onto the boat – Dave saw the bruises and they were horrendous.  They pulled in as soon as they could, but we went on through some shady and very pretty stretches of canal like this 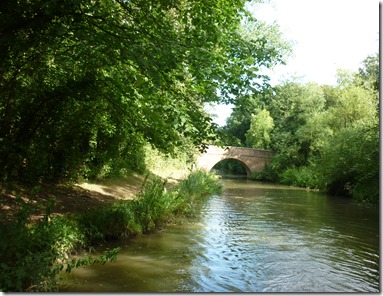 and eventually moored above Tythorn Lock.  It was shady, quiet, and Dave saw two kingfishers while he was putting a coat of paint on the tiller arm, which had been in need of a bit of TLC.  I missed them as I was sitting in the cratch doing yet another running repair on the cratch cover.  We really should have got  a new one ordered earlier – this one won’t last the winter, as the fabric is beginning to crack as well as the stitching coming away, so we must get on with it.  But which supplier to choose?

Anyway, it was a lovely mooring. 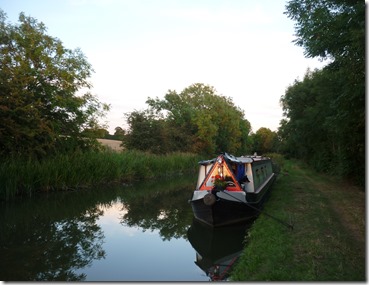 And a warm and quiet evening too.  Meg and Dave had a bit of a play after tea.  It was getting dark (hence the odd colouring on my phone camera) but still very warm. 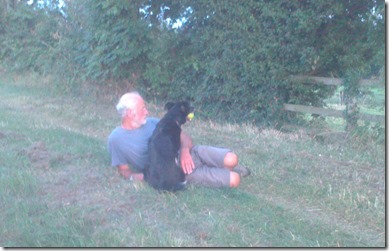