The sun was out again! Dave took the bike and went back down to Market Drayton to buy a paper, while I cleaned up the back of the fire and the hot plate ready to be refitted.  Meg found a sunny spot to wait for Dave’s return. 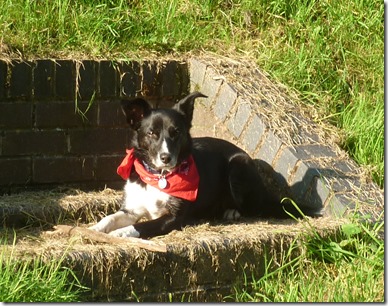 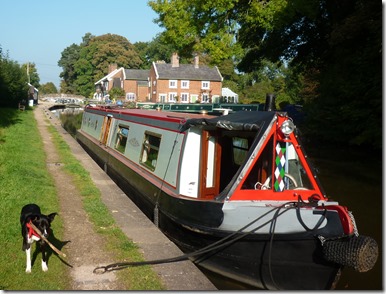 We plunged into the gloom of Woodseaves cutting. In spite of the shade, it wasn’t so cold that we needed hats and coats as we did yesterday. Though when I wanted to take a photo of High Bridge the sun was pretty much directly ahead and shining down the cutting, so I had to wait till we had gone through. 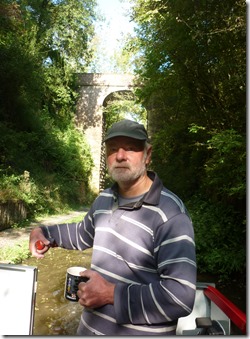 Woodseaves Cutting is well known for having a very wet and muddy towpath, wet enough for duckweed to be growing in the puddles!  Work has been done in places to improve the towpath; here gabions are stopping the edges from slumping onto the towpath which has been improved and surfaced.  I wonder whether it will last? 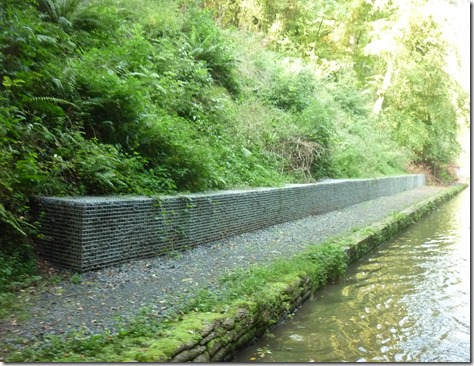 At Goldstone Wharf, this gent had set up his folding chair in a rather dodgy spot I think. 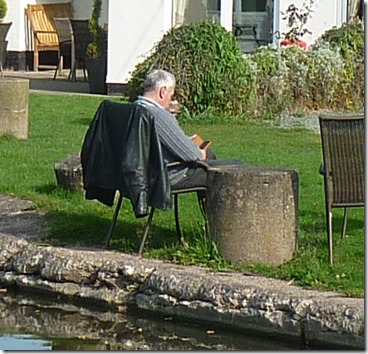 The countryside was beautiful in the sunshine, and this Stag’s horn sumach tree was turning red.  It’s not a native but there are several along this stretch, along with other shrubs.  I wonder who planted them, and why?  I noticed while checking its name (Rhus typhina) that it is toxic if eaten and the leaves may aggravate skin allergies. 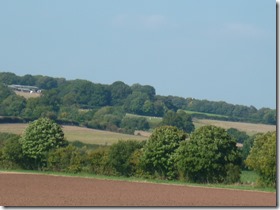 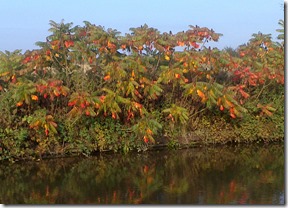 The overhanging roof at the old Cadbury Wharf looked very strange in the low sun as we approached bridge 46 (Knighton bridge), and it took us a moment or two to realise what it was. 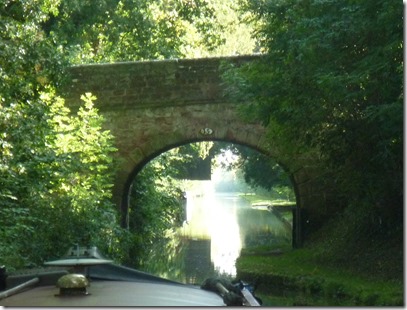 It was once used by Cadbury to transfer goods between Bourneville and the factory here.  The factory is now run by Knighton Foods which produces powder foodstuffs such as custard powder, instant desserts, powdered milk and coffee creamer.  It doesn’t use the wharf, which is now the home of motor boat Birmingham and butty Ethel. 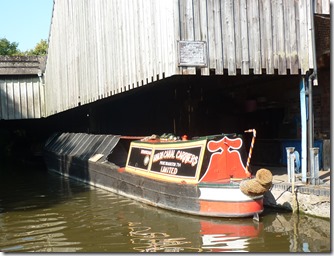 As it was lunchtime we picked one of the few sunny spots along the Shelmore Embankment to stop. Checking with Nicholson’s, we saw that the towpath faces north or thereabouts till way past Norbury Junction, so would probably be in shade from hedges or trees.  We decided to stay put and get on with some jobs. Dave rubbed down the starboard gunwale and I followed behind with the masking tape. I left him painting and took Meg off for a run. When we got back, he had finished the gunwale and was rubbing down the stern deck.  He got a coat of Redox on with just enough time to dry before the dew, and later rain, started falling. The fire cement we had had gone off, so we couldn’t repair the fire; luckily it wasn’t too cold this evening.