Lots of work but great to be out again

Not much luck with internet access so we are a bit behind with our posting….

Finally on the water again!  We’ve been waiting for the Kennet to go down as well as various commitments at home, and arriving at the marina in glorious sunshine was the icing on the cake.  We didn’t go far to start with – we thought we’d better give Meg a walk before shutting her in for a couple of hours so we just went round to the mooring below the start of the Caen Hill locks opposite Foxhangers and walked her up to the bottom of the main flight.  Two boats had already started up the bottom 7 locks but we could see there would be room at the waiting area below the main flight, so we started up as soon as we got back. 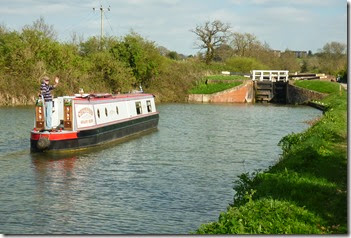 We got a good system going, locking ahead where the locks were closer together, and arrived at the pound below the flight to moor as bloggers Qisma were finishing the flight.  We had been following their blog as they had been stuck at Newbury waiting for the Kennet to subside, so we moored on the waiting area and went back for a quick chat. There still seem to be lots of live-aboards apparently overstaying on the visitor moorings – we hope there’ll be room to moor when we need to.

We took poor fed-up Meg out for a blast up Caen Hill – over the bottom footbridge to the wide grassy slope beyond the side pounds.  It was fabulous in the late afternoon sun. 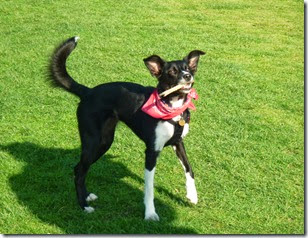 We’ll have to give her a good walk before we set off tomorrow as she’s not lock-savvy yet and will have to be shut in.

Here is our mooring for the night, taken from the bottom of the flight: 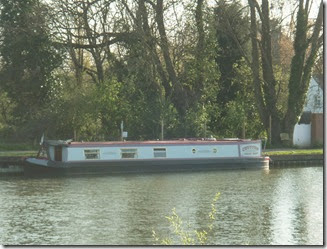 Half a mile, 7 locks and lots of lovely sunshine.

On Monday 14th April we continued up to Devizes, in glorious sunshine.

I took Meg out for a good early walk as she would (supposedly) be spending the morning inside and we were ready to go soon after 9.  There was an interesting notice by our mooring (interesting for pedants anyway!).  But a good sentiment from people who are often blamed for the rubbish along the canals. 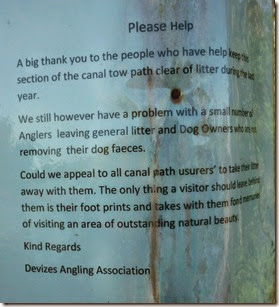 Dave opened the bottom lock and we motored in, and were joined shortly afterwards by a lovely family on the Anglo-Welsh boat that arrived yesterday evening after the lock gates were padlocked.  Their boat ‘Bradbury’ turned out to be the one used by Tim ‘n’ Pru in the recent TV series and sounded much better than the boats we had in our hiring days! 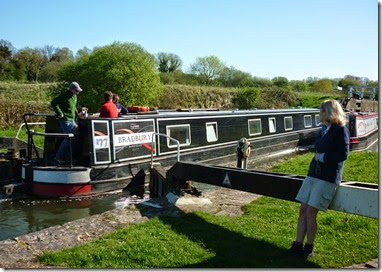 Sara and Duncan, with their two teenagers Ella and Freddy turned out to be very experienced and we went flying up the flight, even more so when their friends arrived to help!  There was only one hitch, at lock 41.  The resident swans have nested on the offside between the lock and the side pound, so that lock is single-usage only for the time being! 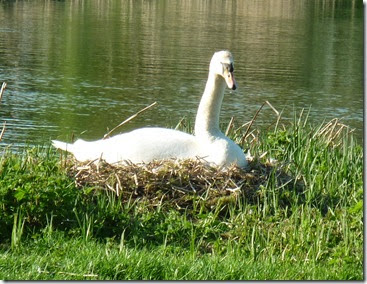 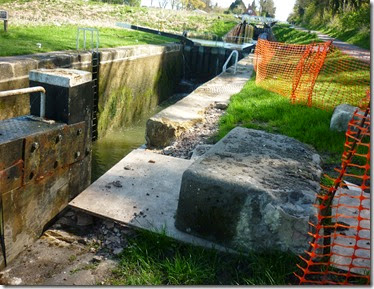 but the work had to be abandoned as the swans were upset by the tarpaulins flapping in the wind. 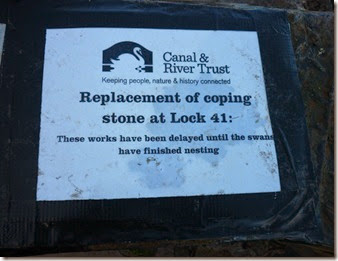 We made good time after that, though Meg got bored and thought it was very unfair that ‘Bradbury’s’ dog was allowed out on the stern, so we relented and I took her off (on the lead) once we were past the swans.

The time from leaving this morning till clearing the top lock below the Wharf was under 3 hours, even with the swan-related delay.  We moored opposite the brewery, while ‘Bradford’ went on towards Honeystreet. 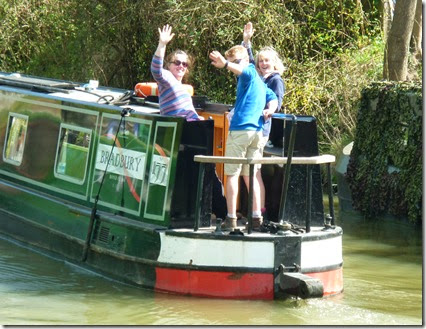 It was great meeting you – thanks for all your help!

After a relaxed lunch we left Meg on the boat and went off for some supplies.  We had hoped to visit the canal museum, but it was closed today for lack of volunteers.  We spent the rest of the day generally lazing about with the occasional dog walk – lovely in the sunshine after the rotten winter we had.