What a lovely spot this mooring is, just a couple of hundred yards north of the pipe bridge.  I have marked it for future use on our Nicholson's.  It was still cool at 9 as we pulled pins, and although the canal didn’t seem to be very busy we met boats at all the locks.  There was something behind the bottom gate at Dashwood lock – Dave went slowly in but oh dear, it turned out that there wasn’t quite enough room for us and the boat was stuck fast.  Reverse gear was no help, reverse gear and pulling the stern rope wasn’t either.  Then I remembered reading about someone who flushed their boat out by opening a top paddle, so with some trepidation I started slowly opening one of them …. I can report that it works!  I tried the gate again and it opened, so whatever it was had shifted.  I called CRT to report it, when I eventually got a signal.  This lock definitely needs a bit of work. 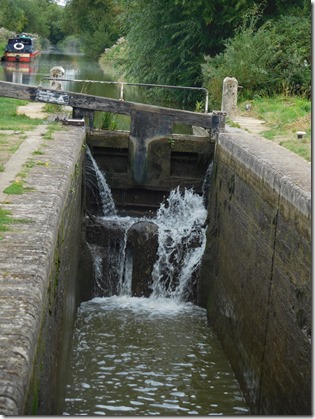 I’ll send a comment to CRT via the website as they are asking people to report leaking locks.

The bad bunny/horrid hare is still in position at Heyford Wharf bridge, as is the golfing frog though he is somewhat obscured by vegetation. 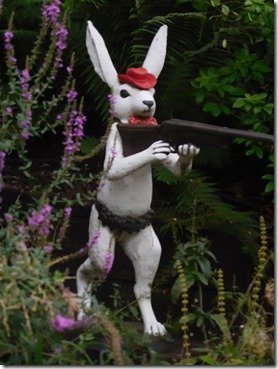 I was a bit worried that the overhanging offside vegetation opposite the visitor moorings above the bridge would sweep my plants away if we suddenly met an oncoming boat, so I brought them all into the well deck.  But the moorings were empty and with no-one coming towards we had no problem at all.  And I was looking forward to a good old moan!

The ease of opening Mill Lift bridge is still a novelty.  You can now enjoy looking at the pretty cottages beyond it instead of having all your attention on holding the beams down to keep the bridge open.  The metal cable run and the control panel (and the rubbish bins) spoil the view a bit.  I should have stood closer to the edge to take the snap. 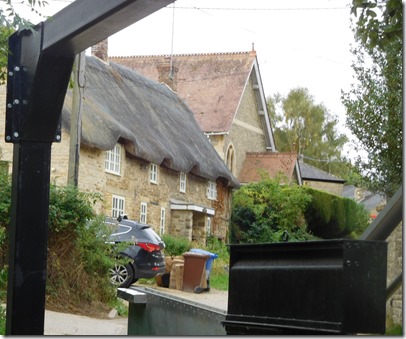 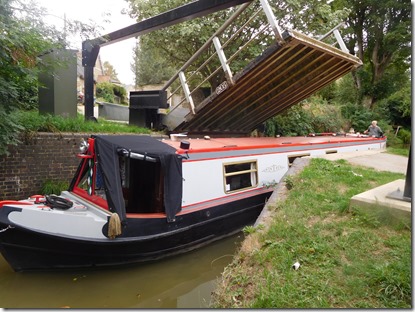 We picked some blackberries at Allen’s lock, but a boat arrived to come down so we had to leave the rest for them.

We were told that there were huge queues and delays at Somerton Deep lock as a boat had got stuck for half an hour.  The original source said it was an unpleasant man who had refused to take his fenders up, and had made himself unpopular on the Thames by poor driving, scraping along other boats and refusing to apologise.  We had heard about him before, but FAKE NEWS! it wasn’t him.  In fact it turned out that  a very nice lady with a 7’ boat had got stuck because of the clump of weed behind the gate, which was duly removed with her grateful thanks and apologies to all involved.

Anyway, it was getting on for lunchtime so we stopped on the meadows where Meg leapt off the boat immediately to follow an interesting trail while we tied up.  Then it was playtime! 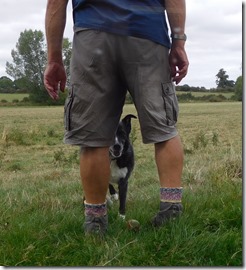 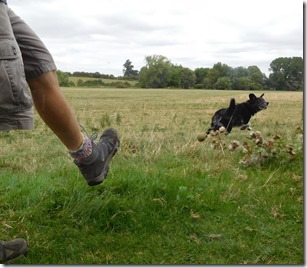 After a relaxed lunch we guessed any queue would be long gone, and as we approached the lock there was just one boat waiting for another to come down.  There were no troubles with the gate, we helped the novices in front of us getting in then the gentleman from a boat waiting at the top helped with the heavy gates, so a very positive experience all round. 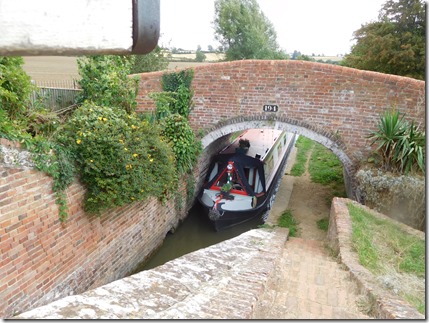 We went on to Aynho, where we moored up on the visitor moorings near the lift bridge, away from the road. 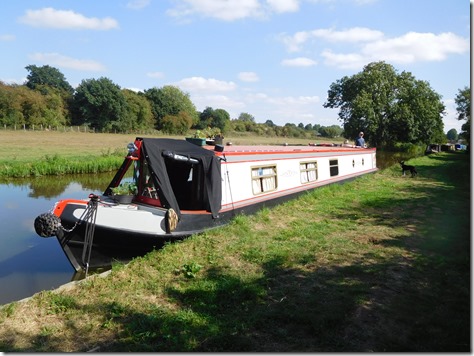 Boats arrived later on but there was still room when we left for a long-awaited meal at the Great Western Arms.  It has a well-deserved reputation for decent food but this is the first time we have been able to stop and there to be a table free.  It is a tad on the expensive side, especially if you want a steak, but we enjoyed our meal very much (even though we chose from the cheaper end of the menu).  Dave had a look on tripadvisor when we got back and was amazed at the grumbling and nit-picking of some of the commentators, one of whom was expecting ‘fine dining’ at those prices.  Well it was fine for us.  I had Glamorgan sausages, which are vegetarian – leek, cheese, breadcrumbs in a sausage shape, dipped in egg and crumbs and fried.  They were delicious.  I tried to make them once and they fell apart.