That’s probably it for this year

The first frost of the season – at least the first we’ve seen. 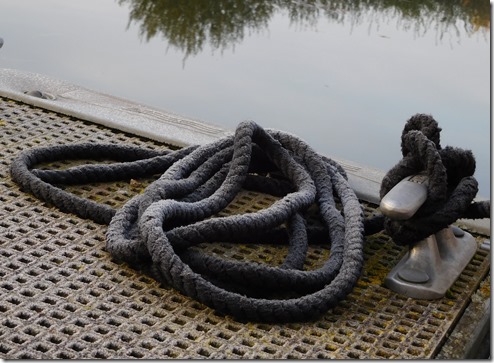 The sun was coming up but I always prefer not to work locks if it is frosty - far too slippery and dangerous for my liking.  So the packing up and cleaning out of cupboards began.  After a while the frost had gone so off we went, and the sun was shining as we came through Vines Park.  I had hoped to take a few photos, but a local couple was taking their grandson to the playground and the Grandad helped with the swing bridges – very useful too, as the padlock on the middle one is an absolute bugger nuisance to get locked again, as the bridge wants to swing back.  So we were through the park like a dose of salts with no time for photos.  Next time I do that swingbridge I’m going to try leaning on its end to hold it closed (rather than pulling it shut from below) and reaching over to deal with the padlock.  It might be easier to do it that way round.

The gates at both ends of Barge lock were ajar – the Severn might be running fast but the Salwarpe, whose bed the canal shares at this point, was quite low.  As of course is the bridge under the M5. 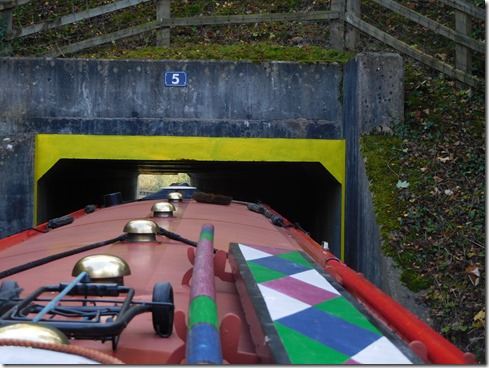 In the wait for Chuffed to come up the staircase pair, I had plenty of time to watch the goldfinches searching for seeds in the teasels.  There were quite a few but only one remained by the time I got focused.  The feathers on their faces protect them from the prickles as they probe the teasel heads.  Pretty little things, and I love their tinkling fairy bells call as they flit about. 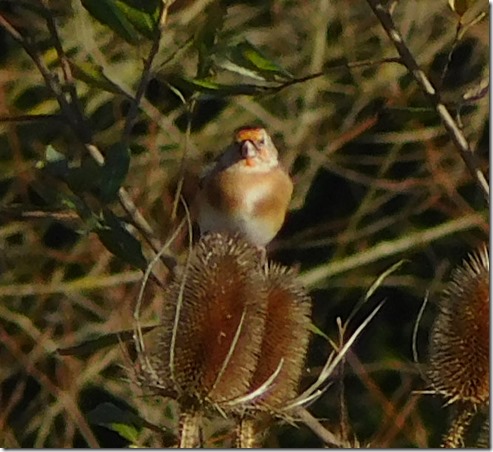 And time also to take in the view back down towards Droitwich. 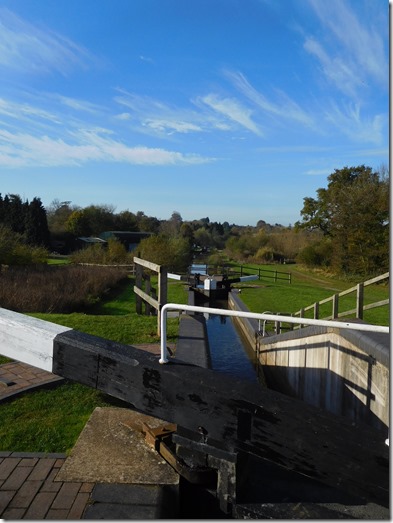 Eventually we were up the last lock and Dave opened what will probably be the last gate of the season. 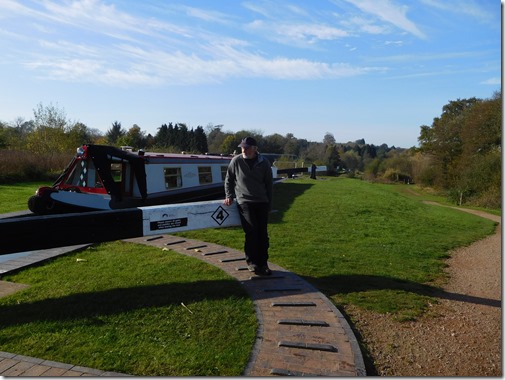 We topped up the fuel tank before reversing onto our pontoon and after a quick lunch cracked on with the packing and cleaning.  All the contents of the food cupboards, apart from some tea bags and a few tins, had to come home, along with all the bedding.  The fiddliest job was to sweep out the well deck.  Foolishly we hadn’t got around to doing this on the good towpath at Hawford Junction – we have two wooden lockers which need to be emptied and removed, along with the folding bike, before the matting can be lifted to get to the grit and bits underneath.  Extra mess was caused by breaking up and bagging the collection of ash twigs we had amassed for kindling, which had been drying in the cratch.

We hadn’t planned to spend so long out this time as we both had commitments on Tuesday morning, and really needed to get going before dark.  So it meant we didn’t have time to meet up with Jennie and Chris (NB Tentatrice) as we had hoped.  Neither have we done all the outstanding jobs, nor winterised fully; we (or more likely just Dave) will be up again before Christmas to check everything is OK, and there is unlikely to be a big freeze before then.